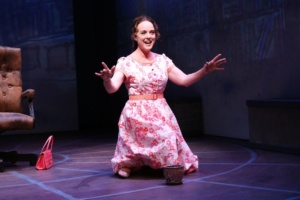 The Burton Lane (music) and Alan Jay Lerner (book and lyrics) musical On a Clear Day You Can See Forever was always problematic, but had this delightful Tony-nominated score. Under the direction and adaptation by Irish Rep’s Charlotte Moore, this show becomes a throwback to musicals of yesteryear. Originally produced in 1965, this show about a girl who has ESP and can make plants grow (telekinesis), and who while under hypnosis to quit smoking regresses to a past-life, was a throwback to the time. It stared the late great Barbara Harris and the wonderful John Cullum. Both received Tony nominations and it won Cullum his Theatre World Award. 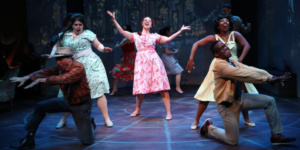 Melissa Errico and the cast Photo by Carol Rosegg

The score is bright, cheerful, and catchy with musical standards such as “Hurry, It’s Lovely Up Here,” “What Did I Have That I Don’t Have?”, “Come Back to Me” and the title song. Under the musical direction of John Bell, this production sounds glorious. The acapella version of the title song starts off the show with a nostalgic feel and lets you know just how talented this cast is.

Most theatergoers know this show from the 1970 film version, which starred Barbara Streisand. In 2011, a horrible version hit Broadway with Harry Connick Jr., turning Daisy into David with his alter ego a 1940’s jazz singer. That version made a star out of Jessie Mueller and had everybody else wanting to forget they were in the show. 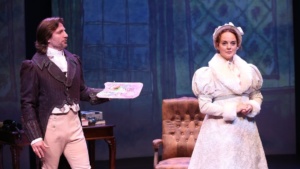 In On a Clear Daywe meet Daisy Gamble (Melissa Errico), who needs to quit smoking for a job. Originally, Daisy needed to quit for her boyfriend’s job security. Her girlfriends take her to see hypnotherapist Mark Bruckner (Stephen Bogardus). Daisy proves she is susceptible to the power of hypnosis and demonstrates her ESP and telekinetic powers. When Bruckner puts Daisy under, she regresses back to 18th century England, as she becomes “Melinda Wells.” Free-spirited Melinda is in love with a painter, Edward Moncrief (John Cudia), whom she marries. When the painter is unfaithful to her, she leaves and sets sail for America, but the ship never reaches Boston and she drowns. A jealous psychiatrist leaks the news of Bruckner’s find. When Daisy accidentally discovers that she is the “Melinda” at the center of the growing controversy and that Mark prefers Melinda to herself, she becomes angry. As Daisy puts it, “You’re not going to go on using my head for a motel.” 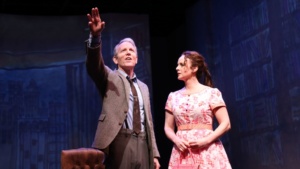 Daisy decides to leave town and goes to the airport, but her ESP powers warn her that the plane on which she plans to travel will crash. Mark and Daisy reunite, and we get our happily ever after.

As Daisy/Melinda, Ms. Errico sounds glorious. She shows off her comic ability and makes us fall in love with her all over again. Mr. Bogardus reminds us why we first fell in love with him in Falsettos with his lilting range and his sure and steady stance. Mr. Cudia, who played the Phantom of the Opera, is the perfect cad with his dreamy looks and full-bodied vocals. Floria Bagel stands out in “Who Is There Among Us Who Knows”, as does Catlin Gallogly, Daisy Hobbs and Matt Gibson in “Wait Till We’re Sixty-Five”. For that matter, all 11 are perfectly cast.

Charlotte Moore has made this show accessible and delightful. Her changes in the script help move this show along. Barry McNabb’s choreography is fun, with a great use of the small space, especially on the “S.S. Bernard Cohn”. James Morgan’s scenic and projection design make this bare-bones set stand out. Whitney Locher’s costumes make a statement, and Mary Jo Dondlinger’s lighting sets the mood. Under the music conductor, Gary Adler, and the orchestrations by Josh Clayton, this four-piece band sounds extensive. I especially loved Jeremy Clayton whose flute, clarinet, recorders, and alto sax work was perfection.

One wonders with the way people are taking offense today, how long a show like this can be revived intact. When you look at musicals from the past, you see that almost everyone is in some way or the other is politically incorrect, but they hold places in our hearts, and when done well, we leave the theatre satisfied with a smile on our face. Bravo Irish Rep and Charlotte Moore, you did just that.