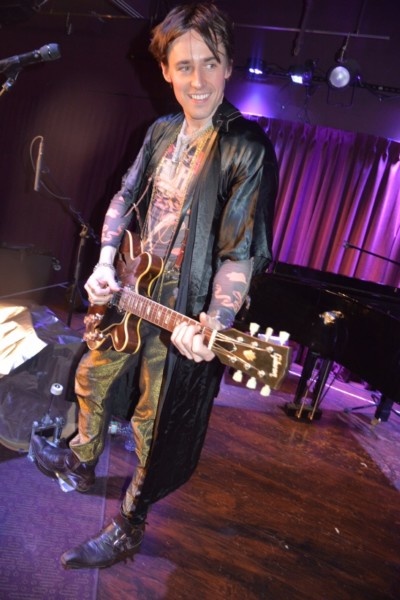 As I have stated Reeve Carney, one of the stars in the highly-anticipated musical Broadway Hadestown and winner of five Independent Music Awards for his album, “Youth Is Wasted,” created an evening featuring the music of the iconic rock band Queen.

Instead of giving you my opinion I give your Reeve Carney in songs and pictures.

A paired down “Bohemian Rhapsody”

“Another One Bites the Dust,”

and “We Are The Champions”

Queen is one of my favorite bands of all time. Freddie Mercury’s theatrical nature, and the theatricality of Queen in general, is part of why I’m so excited to present this show in New York after debuting it in Los Angeles last year.”

In between Reeve gave us a smattering of his wonderfully written original tunes including the amazing “Testify”.

Reeve originated the role of Peter Parker/Spider-Man in Spider-Man: Turn Off The Dark. Hanging up his Spidey suit and headed to Dublin for Showtime’s buzzed-about John Logan/Sam Mende sseries, “Penny Dreadful,” in which he played reckless hedonist Dorian Gray.

Reeve’s album, Youth is Wasted, was recorded primarily in his New York apartment. During his demanding Spider-Man schedule, it was impossible to get back and forth to the studio, so Reeve decided to build his own studio-right in his living room.