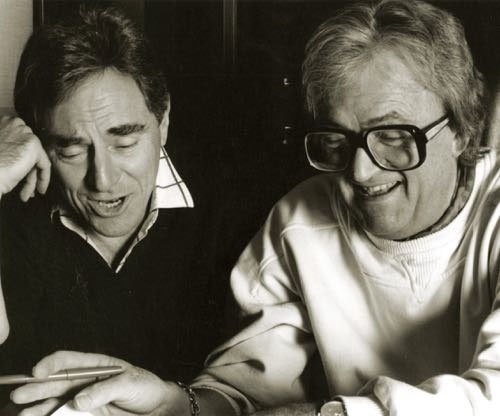 I wanted to grow up to be George and Ira Gershwin from the age of about six. Leslie Bricusse

When I was eighteen, I appeared at the Hollywood Palladium in A Tribute To Anthony Newly and Leslie Bricusse. I performed “Candy Man” from the hit 1971 film “Willy Wonka and The Chocolate Factory,” “Beautiful World” with Sammy Davis Jr. and “A Wonderful Day Like Today” with Steve and Eydie Gormé, both from 1964 Broadway show The Roar of the Greasepaint – The Smell of the Crowd. When I was cast I was already familiar with the 1961 Broadway show Stop the World – I Want to Get Off, his music from the 1967 movie “Doctor Dolittle”. For a long time “Cross Roads of Life,” “I Want It All,” “Pure Imagination” and “Feeling Good” were staples of mine.

Bricusse, died October 19 at age 90, in France leaving behind the music from the 1982 film “Victor Victoria”

There is also the 1970 musical film Scrooge starring Albert Finney, with the hit “Thank You Very Much.”

From the 60s to the 70s, Bricusse partnered with Newley in most of his work, receiving an Academy Award nomination for Best Original Song Score for “Wi;;y Wonka”.  Ian Fraser often did their arrangements.

Bricusse collaborated with composer Cyril Ornadel on Pickwick (1963), and with Henry Mancini (Victor/Victoria in 1982 and Tom and Jerry: The Movie in 1992 and John Williams, Hook in 1991).

As composer and lyricist he scored the film, Doctor Dolittle (1967), which flopped, but received an Academy Award nomination for Best Original Song (“Talk to the Animals”), and  Goodbye, Mr. Chips (1969).

Several artists had his with Bricusse’s music. Sammy Davis Jr., “What Kind of Fool Am I?” (from Stop the World – I Want to Get Off) and “The Candy Man” (from Willy Wonka & the Chocolate Factory) became a No. 1. Other successful versions include: Nina Simone (“Feeling Good”), Matt Monro and Frank Sinatra (“My Kind of Girl”), Shirley Bassey (“Goldfinger”), Harry Secombe (“If I Ruled the World”), Nancy Sinatra (“You Only Live Twice”), The Turtles (“A Guide for the Married Man”), Maureen McGovern (“Can You Read My Mind”), and Diana Krall (“When I Look in Your Eyes”).Bricusse also partnered with George Tipton to write the opening theme of the U.S. television sitcom It’s a Living.

Elizabeth II. Pure Imagination: The World of Anthony Newley and Leslie Bricusse, opened at the Pacific Resident Theatre in Venice, California, in 2013. In 2015, it played at the St James Theatre, London.

I think we have to assume we have one life. Though, having said that, I did write a song called ‘You Only Live Twice.’ I’ll settle for that. Leslie Bricusse