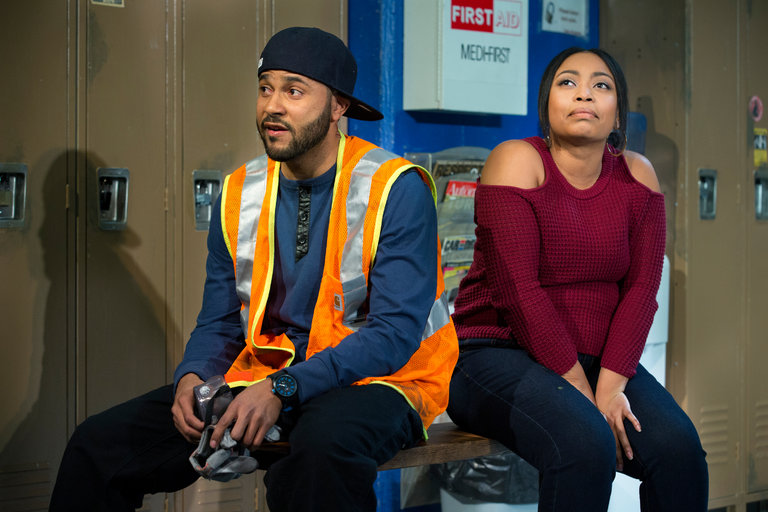 Skeleton Crew Speaks From The Heart

Skeleton Crew Speaks From The Heart

Like the works of August Wilson, Dominique Morisseau’s Skeleton Crew, the final play in the Detroit trilogy, is a perfect display of African American life and the life of a lot of people crushed by the car industry, health care and corporations. There is a fine line to crime and the levels of what is right and wrong when you are homeless, desperate for the every day life essentials such as food and shelter and your job is disappearing before your eyes. 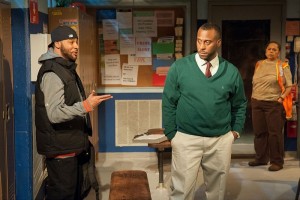 Here we are brought to 2008, the height of the recession and the last automobile plant is about to fall. Union leader Faye (Lynda Gravatt), has had Cancer.  Thanks to the medical bills she ha been left to live in her car and now the office due to the freezing weather. She has worked for this factory for 29 years or what seems like forever. She is proud, gay and defiant. Reggie (Wendell B. Franklin), her foreman, is caught between friends, family and management. When Reggie confides to her that the plant will be shutting down, both Reggie and Faye have to examine their loyalties. 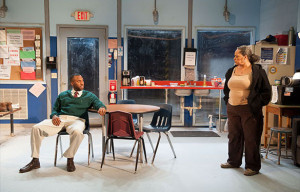 What is left of the factory is Dez (Jason Dirden), who dreams of a life beyond the factory and Shanita (Nikiya Mathis), a pregnant single mother to be, a proud second-generation line worker. Dez and Shanita, have a tension of sexual chemistry. When rumors of the downsizing hit parts start to go missing from the plant.

Ruben Santiago-Hudson directs this piece with heart. He deftly uses a robotic dancer (Adesola Osakalumi) to assimulate assembly line work and it is effective. Lynda Gravatt is fierce as a women forced into homelessness but still retains her dignity and humanity. Wendell B. Franklin shows the conflict of the piece with layering. Jason Dirden keeps you guessing as to who is the real theif. His chemistry with Nikiya Mathis is radiant and sweetly portrayed. Michael Carnahan set places us in the ugliness of life and how even squaller can feel like home.

In the end our hearts break and we feel the pain of those who lose so much but retain their souls. I look forward to seeing more of Ms. Morisseau’s work.

Suzanna BowlingJune 23, 2022
Read More
Scroll for more
Tap
The Taming of The Shrew A Political Agenda Shoved Down Your Throat
Do Not Miss Indecent