STOMP – Bang That Drum for Fun!

STOMP – Bang That Drum for Fun! 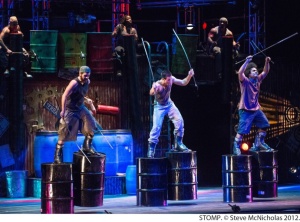 STOMP is bringing its floor pounding, pipe whacking, shopping cart whirling merriment triumphantly back to Chicago, just in time for the holiday season. This innovative concept is fun for the entire family. matching a team of solid performers who communicate using rhythm and humor to an eager audience nightly. Not a word is spoken, but the meaning is transformative for an enjoyable 90 minutes.  The performance artists here play everything from discarded plastic shopping bags to metal garbage cans pounded on like percussive drums. From plumbing fixtures to, quite literally, old kitchen sinks, all the while finding unique rhythms in the metal clanging.  Abandoned super market shopping carts spin across the stage in rapid fire succession. Even the tiniest rustle and tear of newspapers are manipulated to fill the quiet void on stage. The cast is full of young and good looking talent assembled to amuse and regale with continued clanging of old hubcaps, dustbins, radiator hoses, and janitor brooms, all repurposed to coordinate the syncopated, nonstop movements of the collective.  Talk about your going green!  They even used the simplicity of something as innocent as the finger snap and hand clap to test the audience’s rhythmic skills. We did ok with the ever increasingly complex clapping phrases. This provided a unique way to pull the audience directly into the performance first hand, causing more than a few giggles as the routines became increasingly more complex. 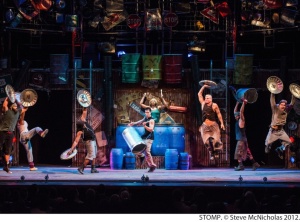 The performers “make a rhythm out of anything we can get our hands on that makes a sound,” says co-founder/director Luke Cresswell.  This racially diverse collective involves an ever rotating team including John Angeles, Jonathon Elkins, Alexis Juliano, Kris Lee, Guido Mandozzi, Artis Olds, Manny Osoria, Jeremy Price, Krystal Renee, Ivan Salazar, Cade Slattery and Reggie Talley.  Each given the opportunity to shine throughout this sensation for the senses.  Whether snapping, clapping, or tapping,  the spectators are having as much fun as the performers on stage. Each troupe member personified the power of teamwork, highly engaging,  and masters at the capabilities of producing and creating unique sound from a wide-range of ordinary objects.  They use everything to generate sound with the exception of traditional and conventional percussion instruments. This combination of wordless communication, sound, movement and visual comedy proved really engaging as a piece of performance art. 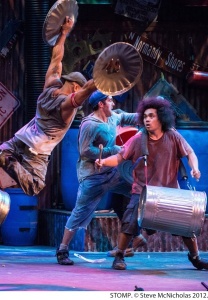 From high flying drummers, cartwheeling broom sweepers, and toe tapping hoofers, STOMP is nonstop entertainment from beginning to end.  Playing for over twenty years, STOMP has won numerous accolades including an Oliver Award for Best Choreography (London’s equivalent of a Tony Award), A New York Obie Award, a Drama Desk Award for Unique Theater Experience, and has been invited to perform at both the Emmy and Academy Awards. The tight synchronization and creativity needs to truly been seen to be appreciated.  Judging by the packed theater and vast age range of those who attended the night I was there, Chicagoland is actively along for the ride this winter. 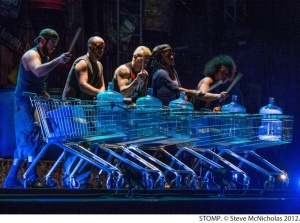 STOMP is best described as a unique theatrical experience. There are no recognizable songs. There is no orchestra. The cast is dressed like the ensemble of Rent. However, every sound  produced by the tight ensemble is magical, as this cast worked hard for the robust applause.  They let you see their sweat, which made this all the more fun. A bit of a warning for the first few rows. The Broadway Playhouse Theatre is an intimate space. Watch out for the occasional broom head to come flying out into the audience.  The night I attended, a trio of brooms broke during the opening number and one landed in the front row.  You won’t get that from Hamilton.  This multi-cultural cast produced a mountain of vitality and a sea of fun. STOMP is so much more than a sum of its parts.  It is a celebration of the human spirit! A winning blend of ingenuity and passion, heart stopping, feet pounding, a rhythmic party of positivity. It may be cold outside, but the talented team of STOMP is heating up the stage nightly at Broadway Playhouse Theater through January 1, 2017.

Genevieve Rafter KeddyJune 22, 2022
Read More
Scroll for more
Tap
The Servant of Two Masters Brings Commedia dell’arte To Life
The Death of the Last Black Man in the Whole Entire World AKA The Negro Book of the Dead Beautifully Performed But Confusing in Content