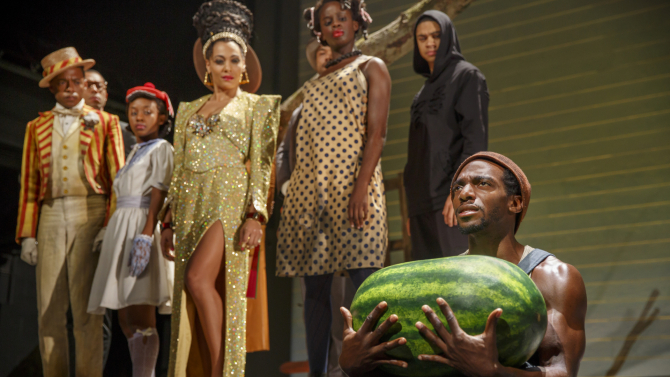 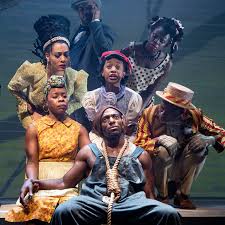 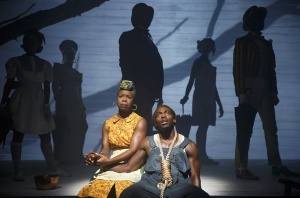 In all honesty what Suzan-Lori Parks’ play The Death of the Last Black Man in the Whole Entire World AKA The Negro Book of the Dead is about, is beyond me. I know that the cast was talented, that the direction by Lileana Blain-Cruz’s was superb and it had something to do with African-American history and identity. The two central characters are Black Man With Watermelon (Daniel J. Watts) and Black Woman With Fried Drumstick (Roslyn Ruff) who are in a dream like state with archetypes that are drawn from pieces of history. Queen-Then-Pharaoh Hatshepsut (Amelia Workman), Bigger and Bigger (Reynaldo Piniella), a reference to the leading character in Richard Wright’s novel, Native Son, Before Columbus (David Ryan Smith), Voice on Thuh Tee V (William DeMeritt), Yes and Greens Black-Eyed Peas Cornbread (Nike Kadri), Prunes and Prisms as Ruby Bridges integrating William Frantz Elementary School in 1960 (Mirirai Sithole), Ham (Patrena Murray) and Lots of Grease and Lots of Pork (Jamar Williams) inhabit the spaces between the dream.

As the Black Man With Watermelon dies over and over either through electric chair or lynching, his grieving wife morns stating: “Yesterday today next summer tomorrow just uh moment uhgoh in 1317 dieded thuh last black man in thuh whole entire world. Uh! Oh. Dont be uhlarmed. Do not be afeared. It was painless. Uh painless passin. He falls twenty-three floors to his death. 23 floors from uh passin ship from space tuh splat on thuh pavement. He have uh head he been keepin under thuh Tee V. On his bottom pantry shelf. He have uh head that hurts. Dont fit right. Put it on tuh go tuh thuh store in it pinched him when he walks his thoughts dont got room.” The character Bigger and Bigger reenacts the deaths as the watermelons pile up.

I especially like the presence of Amelia Workman who serenely ruled the stage.

Though Ms. Parks is acclaimed and has won the Pulitzer Prize, this piece originally written in 1990 is suppose to emulate jazz. I don’t see that. Though the language is musical, it is more of a format of gibberish, exaggerated dialect, nonsense mixed with endless repetition.

A least what was happening was projected, so you could at least keep track. The dance sequences, choreographed by Raja Feather Kelly made even less sense, as the music was more electronica, than from any time period.

Riccardo Hernandez’s set is dominated by a large broken tree branch and an electric chair and it is haunting. Yi Zhao’s stark lighting ads to the vision.  Montana Blanco’s costumes bring history to a timeline.

Maybe in the future this play will make more sense, instead of just being interesting to look at. Or maybe the last black man will never come to pass.

The Death of the Last Black Man in the Whole Entire World AKA The Negro Book of the Dead: Pershing Square Signature Center, 480 West 42nd St. until Dec. 18th.