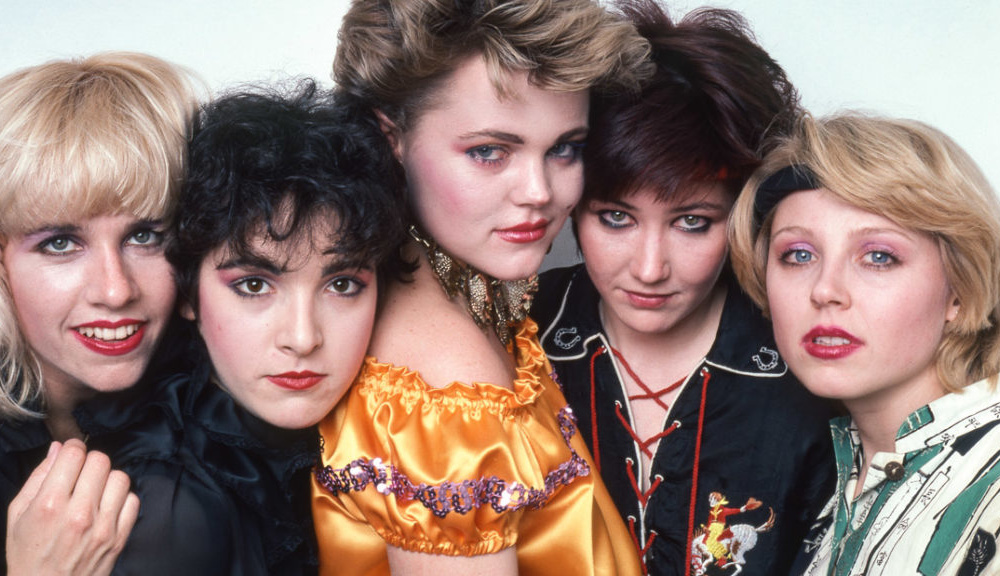 GOING TO A GO GO — The Go Go’s documentary on Showtime is a fun ride for sure. I was obsessed by this group when they burst onto the music scene in the 80’s. Right off the bat, the filmmakers make it clear (and, repeat it several times) that the Go Go’s were the biggest selling female-band ever and they’re not in the Rock & Roll Hall of Fame – but, then neither are The Monkees, so they’re in excellent company.

Back then, the whimsical Fab 5 were heroes to both males and females. Sure, they may have started off more punk than pop … under the careful guidance of one Ginger Canzoneri – who often had to pawn her complete household to get this and to get that for the band -but, back then, it’s what a manager had to do to have their band survive.

The towels they used on the cover of Beauty and The Beat … were from Macy’s and Ginger even returned them.

She tacitly helped shape the band as they tuned to more of a pop phenom.

The tactics of how they came together was pretty fascinating too-they all shared the so-called punk-ethos … go out, make noise and have fun … And, yes, sometimes a bit too much fun.

And, yes, their fun is detailed.

I must admit I was a Belinda Carlisle fan from day one. I liked everything about her and watching her sing onstage was surreal. I also adored Jane Weidlin, whose guitar playing was also relentlessly good. I seem to recall even being at an early Jane Weidlin party at her house in LA and she was great, great fun.

(I also must add that after Carlisle left the band, she delivered -with producer Rick Nowels -the sensational single “Heaven Is Just A Place On Earth”)

The Runaways, Joan Jett’s first major band, were not really competitors, but rather the other “girl” band out here at the time. They had master-Svengali Kim Fowley, but the Go Go’s had Ginger … and, major support from Miles Copeland, who was just starting his fledgling IRS Records. He signed them and they took off.

The record business back then worked a lot differently; touring, clubs and colleges, were the way to begin and build a major following. When Copeland added them as the opening act for The Police … they had it made in the shade.

As the group got bigger and bigger, Canzoneri was eased out. Weidlin now admits it was a terrible mistake; not mentioning any names. Canzoneri was so hurt she left LA for good.

The film goes behind the music to share the origins of the band top 10 hits – from “Our Lips are Sealed” to “We Got the Beat” to “Vacation”, all written by bandmates Caffey and Wiedlin. There’s also footage of the band’s rocky first tour opening for The Replacements and The Specials in England.

During their tour with the Police, their debut album Beauty and the Beat made it to #1 on the Billboard charts in 1982. It stayed for six weeks and was the first and only time an all-female band who wrote their own music and played their own instruments held that spot. The group recalls that Sting brought in champagne when that event occurred,

One of the amazing aspects of this who documentary is the fact that it was directed by Allison Ellwood – fresh from her triumph of Laurel Canyon which she also helmed.

There are several similar patterns here to Laurel Canyon (which was just nominated for 3 Emmys) … Ellwood definitely excels at these docs.

The Go Go’s have reunited for this film with a new record, called “Club Zero” – which magnificently recalls their earlier work. It’s a whole different world now and while its chances of success are questionable it’s a great record. Check it out here:

I loved the documentary … but, again, Ms. Ellwood … how about one on The Monkees?

E GONE — It’s the end of an era for celebrity news. A trio of E! entertainment programs — the long-running E! News, along with newer shows Pop of the Morning and In the Room — have all been cancelled.

According to a report, these decisions were made by parent company NBCUniversal/Comcast which is looking to “streamline its programming and restructure internally to create more efficiencies.” Economic hardship caused by the coronavirus is also credited as a factor.

Comcast, in particular, has been hard hit by the pandemic and all the foibles on The Today Show.

The Today Show ‘s Jaclyn Levin (who had been at the show for decades and presided over the ill-fated (and, highly promoted) Megyn Kelly Show has left NBC as well).

All three shows are currently based in New York City — E! News officially relocated from Los Angeles last year — but the network’s future in-studio productions will reportedly return to the west coast.

The flagship news show is currently being anchored by Lilliana Vazquez and Scott Tweedie (pictured above), both of whom stepped into their roles this year.

Left off that list was the terrific Steve Kmetko … and, I don’t know why, as he was one of the stations biggest lights there.

And, you thought TV people didn’t stick together.

He also has served as producer and reporter of several video segments on California’s gay-marriage ruling for theadvocate.com, the website of the gay news magazine The Advocate.

SHORT TAKES — Watched Netflix’s The Old Guard last night; the film version of the Greg Rucca-graphic novel with Charlize Theron. The story of four warriors who just don’t die, was good, but seemed to run out of steam at the end. Charlize Theron (one of the producers) was great, in action mode, and they set it up for a possible sequel … Big-shake up at Warner Media, Bob Greenblatt and Kevin Reilly (who cancelled Millennium at Fox) out. The media companies are in free-fall these days; Live Nation announced last week that their business was off 98% …

Simon Cowell was hospitalized Saturday after breaking his back in an accident at his Malibu home. The America’s Got Talent judge and executive producer was reportedly testing his new electric bike in the courtyard of his home when the mishap occurred. He was taken to the hospital, where he was slated to undergo surgery Saturday evening. “He’s doing fine,” a rep for Cowell assured People. “He’s under observation and is in the best possible hands.” The accident comes just days before Cowell is scheduled to shoot America’s Got Talent‘s first live show. The NBC reality competition series resumed production on its current 15th season in late June following a months-long production shutdown due to COVID-19. As a safety precaution, the show relocated from its lavish Hollywood auditorium venue to an outdoor setup in Simi Valley designed to resemble a drive-in movie theater, with judges Cowell, Howie Mandel, Heidi Klum and newcomer Sofia Vergara now seated an appropriate distance from one another … Micky Dolenz was the subject of 4 (!!!) brilliant articles in Forbes.com.

Now, that’s excellent work from his team. Congrats … Macmillan’s book The Big Goodbye (by Sam Wasson) appears destined for a movie, to be directed by Ben Affleck. And, no, no word from Macmillan’s Molly Ellis and Mary Vanakin; sad for sure … And, Happy Bday to Stuart Shabman!

G. H. HARDINGNovember 13, 2021
Read More
Scroll for more
Tap
What To Watch Aug 9th To Take Away The Blues
Effective Tips for Starting Up Your Fire & Water Damage Restoration Services