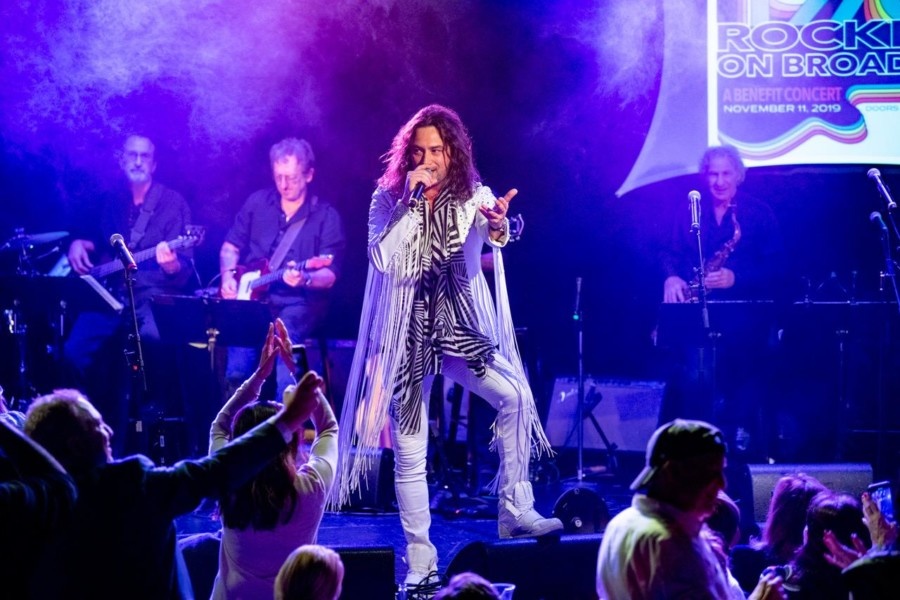 Rockers On Broadway — Donnie Kehr’s 26th edition of his Rockers On Broadway Monday night was a smashing success. Mostly due to the presence of certified Broadway-star Christie Brinkley in the audience, cheering on her daughter Alexa Ray Joel; who did a wondrous version of “New York State of Mind,” written by her father Billy.

The show started in brilliant fashion with Justin Sargent’s take on “Won’t Get Fooled Again,” a signature song from The Who. Lisa Brescia followed with a great take on Joni Mitchell’s “Big Yellow Taxi.” Sam Behr followed with Chaka Khan’s “Tell me Something Good” and a smashing version of the Bill Wither’s chestnut, “Lovely Day” from James Harknes, literally electrified the audience.

Ryann Redmond’s “I Will Survive,” the Gloria Gaynor-hit was next and then a stunning version of “I’m Easy” from Keith Carradine, from the brilliant Robert Altman film Nashville (1975).

Producer-extraordinaire Russ Titleman was properly honored with snippets of some of his biggest hits; James Taylor’s “Shower The People” and Eric Clapton’s “Tears In Heaven.”

Rupert Holmes followed with his “Escape: The Pina Colada Song.” I was standing with Rupert and Rockers-PR man David Salidor, when he said that the song was a hit almost 40 years ago to the day. Talk about lasting power.

Tommy Brunett’s “My Sharona” followed as well as a stirring “Take Me To The Pilot” from Isabelle Gottfried And, Heart’s Barracuda from Tamika Lawrence; which was just sensational. What a voice … anthemic for sure.

The show closed with Constantine Maroulis’ take on “Bohemian Rhapsody.”

RICKY RETURNS — Ricky Gervais has been pressed into service once again and will host the 77th annualGolden Globes next year.

While the Oscars and the Emmys went hostless this year – to middling reviews- the Hollywood Foreign Press Association’s NBC-broadcast shindig is putting a blast from the past front and center with the After Life creator playing ringmaster and MC for a fifth time on January 5, 2020.

“Once again, they’ve made me an offer I can’t refuse,” said Gervais of the host job for the three-hour show. “But this is the very last time I’m doing this, which could make for a fun evening,” he added with a clear sense of threat for nominees and organizers alike.

Fact is the Comcast-owned network, dick clark productions and the HFPA had been looking at a variety of comedians since early this summer to shoulder the hosting gig, but talk kept coming back to Gervais, I hear. After preliminary talks with Team Ricky went well, a formal offer was made and accepted in the last week or so.

After years of the boozy Globes going without a host, Gervais roasted Hollywood at the annual Beverly Hilton-based ceremony in 2010, 2011 and 2012 before handing the reins to Tina Fey and Amy Poehler for three years. Lured back in 2016 (after saying he was done hosting), the often scathing co-creator of The Office was followed by NBC late-night hosts Jimmy Fallon and Seth Meyers in 2017 and 2018, respectively.Brooklyn Nine-Nine’s Andy Samberg and Killing Eve star and Globes winner Sandra Oh held things in check this year. Now Gervais will be back for the 25th anniversary of the often freewheeling ceremony.

“There is always palpable electricity in the room when Ricky takes the Globes stage,” NBC Entertainment chairman Paul Telegdy said about the record-holding host. “His return as master of ceremonies at theGolden Globes is much anticipated. It is sure to make for an unexpected evening. We can’t wait to see what he has up his sleeve.”

“When Ricky Gervais is at the helm of the Golden Globes Awards, we can always expect the unexpected,” HFPA chief Lorenzo Soria added of the comedian, who has scolded the 90-member group repeatedly in jokes in the past. “We’re excited to see it all unfold on January 5!”

Oh, be careful what you ask for there, gents, in hoping for the ratings traction that eluded the 76th annualGolden Globes.

As well as hosting the Golden Globes, Gervais has another season of After Life coming to Netflix,apparently next year as well.

MORE CROWES —The Black Crowes have played their first show since announcing their reunion just hours earlier on the Howard Stern Show.

New York City was treated to a live album perform of The Black Crowes 1990 debut album Shake Your Moneymaker. The 2020 reunion tour will also feature a full performance of the album.

In the Stern interview Chris Robinson talked about his depression and his “negative bullshit”. That negativity split the band and developed into a six year gap where Chris and his brother Rich didn’t communicate at all.

Here’s their setlist from the show:

“Jealous Again” (from Shake Your Moneymaker, 1990)

“Seeing Things” (from Shake Your Moneymaker, 1990)

The Black Crowes will begin their reunion tour in Austin, Texas on 17 June 2020.

SHORT TAKES — Coco Dolenz returns to the Coffee Gallery Backstage in Altadena, California, this Saturday. Big-brother Micky Dolenz will also be on-hand. Variety’s Roy Trakin will be there too …February 2020 looks to be quite the month for music: Hall and Oates will play MSG in NYC on February 28 ; Micky Dolenz plays My Father’s Place on February 23; and, Robert Miller’s Project Grand Slam is at MFP on February 21 … Nice to see Kathie Lee Gifford returns to Today yesterday on their third hour. She looks great and relaxed. Kudos! … SIGHTING: Stumptown’s Adrian Martinez seen on Remsen Street in Brooklyn Heights … Woody Allen won his suit against Amazon’s Jeff Bezos. The settlement is not known, but the Woodman was suing for around $68 million. Bet Bezos took the money out of petty cash … Here’s a story about a newly-known guitar slinger, with a famous father. He played Huntington’s Paramount Theater last week, and a journalist from a very-prominent publication was set to interview him. Literally, at the last moment, the rugged was pulled out on the writer. The guitarist’s former-publicist said that “an act like that was not uncommon. Poor management; poor direction and poor advice from his team, was most likely the case.” … And, don’t forget, Mary Wilson and Mark Bego at the Paramus, New Jersey Barnes and Noble Saturday; and, on Sunday at the B&N in Clifton, New Jersey, for their current hit book, Supreme Glamour (Thames + Hudson).

Suzanna BowlingMay 14, 2022
Read More
Scroll for more
Tap
Theater News: Plaza Suite, Hadestown, Stephen Schwartz, Tootsie, Beetlejuice Gets a Cast Recording, A Soldier’s Play Gets a Cast and The Woman in Black
Last Chance To Still See Still Getting My Act Together At The York