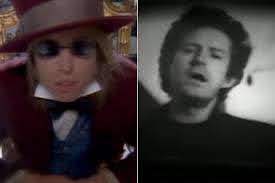 MORE BOYS OF SUMMER — Tom Petty’s rejection of a demo made by Heartbreakers guitarist Mike Campbell paved the way for Don Henley to record one of his biggest solo hits, 1984’s “The Boys of Summer” and one of my all-time favorite recordings.

On Brian Koppleman’s podcast The Moment, Campbell said he had created the demo with a new Linn drum machine, complete with all the chords and the guitar parts but no words. He played it at his house for Petty and producer Jimmy Iovine, both of whom were underwhelmed.

“In Tom’s defense, when I got to the chorus, I went to a different chord,” Campbell said. “It was kind of like a minor chord. As the song ended up, on the chorus it goes to that big major chord. You know, it lifts up. And so, he heard a slightly inferior version. And I remember when it went by, we were kind of grooving to it, and it got to that chord and Jimmy Iovine goes, ‘Eh, it sounds like jazz.'”

Campbell was “completely deflated” by the response, but he also realized Iovine was right.

So, he changed the chords on the chorus and dropped them onto the demo. Then Iovine called him and suggested he play it for Henley, who was looking for music for what would become Building the Perfect Beast. Figuring that Petty, even with the new chords, was “probably fed up with it” and had plenty of other music to work with, Campbell agreed and took the tape to the former Eagles drummer’s house.

“It was just me and him,” Campbell noted. “We sat at a big table. He sat at the other end like the judge, totally quiet and didn’t bat an eye – just listened with his eyes closed. And then he said, ‘Okay, maybe I can do something with that.'”

Campbell, who’d never met Henley before, said the drummer was so serious that he couldn’t tell if he liked it. Then he got a phone call from Henley. “He’s like, ‘Oh, I just wrote the best song of my life to your music,'” Campbell remembered. “‘Really? I’d like to hear that.'”

But the demo was in a key ill-suited for Henley’s voice. So, when it came time to track the song in the studio, Campbell had to re-learn all the guitar parts he had improvised on the demo, which was in a higher key. He was able to get it all down, but he made one spontaneous change: the song’s classic outro solo.

Campbell also recalled that during the sessions for Southern Accents, he and Petty went out to a car to listen to a mix of “Don’t Come Around Here No More,” only to turn on the ignition and hear the radio playing “The Boys of Summer.” Thinking it might upset Petty, Campbell immediately changed the station, only to hear another station playing the song, too.

“‘Boy, you know, you were really lucky with that,'” Campbell remembered his partner as saying. “‘I wish I would have had the presence of mind to not let that get away.’ That was a real ‘brother’ moment we had.”

OUR BRUCE —Bruce Springsteen has made history as his latest album Letter To You hit number 2 on the Billboard 200 chart.

The Boss is now the first recording artist to have an album chart in the top five in each of the last six decades, Billboardreported Monday.

Letter To You was the top-selling album in its first week of release on the Billboard Album Sales, Vinyl Albums and Tastemaker Albums charts.

It’s Springsteen’s 20th album and its 12 tracks reflect on his relationships with people he has lost over the years including E Street Band players Clarence Clemons; Danny Federici as well as his friend and teenage bandmate George Theiss.

In “One Minute You´re Here,” the 71-year-old rock icon sings about being on his own while “I´ll See You In My Dreams” is about how he’s ready to ‘meet and live and laugh again’ with his late pals.

Speaking about his latest music, Springsteen said: ‘” have no regrets about things that I did or didn’t do. I feel like I gave my full shot at what I was best at.”

He went on: “Once you reach my age, death is a part of life. You get in your 50s, 60s and 70s – it just becomes a regular occurrence among family friends. And it´s just a part of living.”

Springsteen and the E Street Band, who last performed together in 2016, recorded the album in just a few days.

Following on from the success of Born To Run, Darkness On The Edge Of Town hit number 5 in 1978.

Springsteen had plans to tour Letter To You with the E Street Band in 2021,  but that may not be possible with the COVID-19 pandemic.

“My band is at its very best. I can go out and perform at my very best. New generations of fans can come and say that they saw us when we were at our peak and to have to give up a year, and hopefully not more, but to give up time on that right now is painful.”

SHORT TAKES — The Adventures Of Sal–author Andre Ginnane gets the Ray K. podcast treatment Thursday for TIC Business Radio … Still waiting on that Peter Frampton bio from PR-woman Carla Sacks. We’d love to let our readership know about it … We’ve had a lot of great things in Manhattan. One of them is/was Bemelmans Bar in theCarlyle Hotel on NY’s storied Upper East Side. Here’s a great article, from New York Magazine, on how that luscious spot has weathered the pandemic storm: https://www.grubstreet.com/2020/11/bemelmans-in-repose.html?utm_source=Sailthru&utm_medium=email&utm_campaign=Grub%20Street%20-%20November%202%2C%202020&utm_term=Subscription%20List%20-%20Grub%20Street%20%281%20Year%29 …

This Sunday, November 8, Romeo Delight, the #1 Van Halen-tribute band, headlines an Eddie Van Halen-tribute show at  the historic Birchmere Theater in Alexandria, VA. Says Romeo Delight’s Buddy Blanch,“Romeo Delight is mourning the loss of a true American Legend. Eddie was the most talented musician who has touched and shaped the world of music like no other.  Romeo Delight has always showcased his talent and will continue to play his music and honor his legacy with our performances. The world has lost a Guitar Hero and we are all gutted by this news. You fought long and hard, Eddie. Thank you for the music and the memories. We love you and will continue to play your music forever.

Rest in Peace” … And, I’ve said it before, industry-has-been Bob Lefsetz, who pens the sometimes-twice-a-day Lefsetz Letter, is totally out of whack. Sure, he penned a great review of a Dave Mason show several years back, but his trashing of the David Bryne American Utopia-show on HBO, was by far his worst blunder yet. Lefsetz, is a failed music-biz executive, seems to take great pride in skewering the industry on a regular basis. Oddly enough, after his blistering review, he somehow comes full circle and finally praises the entire adventure. I know he’s been one-on-one with Elton and has actually brought to light some truly missing links in the biz, but he’s a total blowhard IMO. Here’s his missive: https://celebrityaccess.com/2020/10/27/david-byrne-on-hbo/?utm_source=phplist864&utm_medium=email&utm_content=HTML&utm_campaign=CelebrityAccess%20Daily%20Encore

SHORT TAKES — The Adventures Of Sal–author Andre Ginnane gets the Ray K. podcast treatment Thursday for TIC Business Radio … Still waiting on that Peter Frampton bio from PR-woman Carla Sacks. We’d love to let our readership know about it …

We’ve had a lot of great things in Manhattan. One of them is/was Bemelmans Bar in the Carlyle Hotel on NY’s storied Upper East Side. Here’s a great article, from New York Magazine, on how that luscious spot has weathered the pandemic storm: https://www.grubstreet.com/2020/11/bemelmans-in-repose.html?utm_source=Sailthru&utm_medium=email&utm_campaign=Grub%20Street%20-%20November%202%2C%202020&utm_term=Subscription%20List%20-%20Grub%20Street%20%281%20Year%29 …