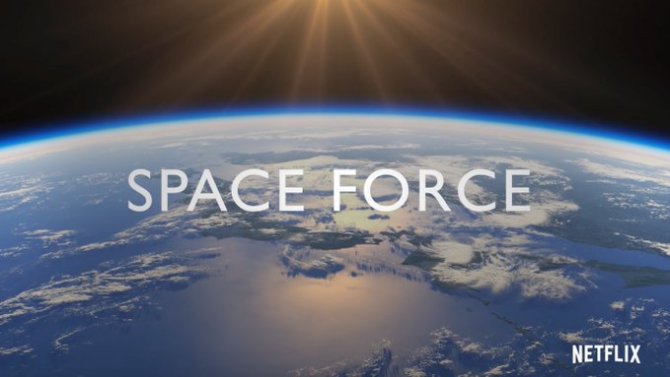 MORE SPACE — (Via TV Line) Somebody crank up “Kokomo,” because Space Force is coming back. The Steve Carell comedy has been renewed for Season 2 at Netflix, according to The Hollywood Reporter.

The series will also undergo a “creative revamp,” with Norm Hiscock (Parks and Recreation, Brooklyn Nine-Nine) joining Greg Daniels as co-showrunner and production moving from Los Angeles to Vancouver in an effort to cut costs. Co-star Jimmy O. Yang will also join the show’s writing staff.

Space Force, which dropped its first season in May, stars Carell (The Office) as Gen. Mark R. Naird, a decorated pilot who is tapped to lead the newly formed sixth branch of the U.S. Armed Forces: Space Force. Despite his skepticism about the job, Mark uproots his family and moves to a remote base in Colorado, where he and a colorful team of scientists are tasked by the White House with achieving total space dominance.

The phrase creative revamp” is never a good sign, but I love Carell and they keep Malkovich onboard, I’ll stay as a viewer. I watched the entire first-season and found it a big yawn … except for Malkovich. It was trying so hard to be Get Smart ... and, just didn’t make it. And, Kudrow was way underused too.

LAW &  ORDER-SVU — Gladiators and Guardians was the season premiere (22nd season!) of NBC’s Law & Order-SVU and firmly came down on the whole BLM movement … as well as the current pandemic.

It was an episode ripped-from-the-headlines where a woman in New York’s Central Park called the police on a man she believed was threatening to her. The cops arrived, discovered a body and the case went a bit awry from there.

With the ensuing crowd and subsequent headlines questioning every move by the detectives, a new era definitely started on the show.

Was it handled well? It was certainly tricky and awkward. Captain Benson was questioned and when her son asked her at the close of the show why … even she took a step back. I think it was overall fair … but, definitely new and awkward.

Viewers were confused and frustrated … the two buzzwords for this year.

Face it, TV just had to change … and, the change is going to be difficult.

UNDOING IT —Episode 4 of HBO’s fascinating, but, frustrating The Undoing promised a new theory of the killing of Elena … but, when Jonathan (Hugh Grant) says he has one … it’s the end of the episode and won’t be revealed till episode 5.

This show, touted proudly by just about every critic, has, for me, been somewhat of a disappointment. As I previously said, it’s just an old fashioned whodunit … save for some fancy dress and terrific visuals. Actually, now that I think about it, that’s really what I’m getting from this show – terrific shots of New York at night.

In truth, the one powerful moment of the show was when Franklin (Donald Sutherland) addresses the principal of the school where the son Henry goes, with a powerful and scary speech. It was an Emmy-winning performance. Sutherland is just masterful here and has never been better.

I think I have figured out who did do it. And, it wasn’t Jonathan. There are two episodes left.

SHORT TAKES — Terrific Mark Bego/Mary Wilson interview in Tuesday’s Digital Journal from Markos Papadatos, on the re-release of their Eat Like A Rock Star (Skyhorse).  Check it out here: http://www.digitaljournal.com/entertainment/music/chatting-with-mary-wilson-of-the-supremes-and-mark-bego/article/581195 …

Bob Guccione Jr. this year returned to Spin — the music magazine he founded in 1985 to shake up music journalism — as a creative adviser. Publishing Insider recently caught up with him to hear his thoughts about Spin’s 35th anniversary, and how to reinvent the publication as music fans follow their favorite artists on social media, while streaming algorithms replace radio for music discovery. Check  it out here: https://www.mediapost.com/publications/article/357858/bob-guccione-jr-returns-to-spin-magazine-hung.html?utm_source=newsletter&utm_medium=email&utm_content=readnow&utm_campaign=120465&hashid=XO1tVx7hesXh5ff14Iz1D2-sWJw …

Finished up Gene Cornish’s Good Lovin’ – My Life As A Rascal and just loved it. It’s too bad it wasn’t given a more formal release, as its chock full of great stories and great names; like the late-Sid Bernstein and Herbie Rosen. Sure. it’s a bit similar to the Tommy James book, with shocking tales of how the business was back then, but the true hero appears to be Steve Van Zandt, who rescued Gene, and the band, at a crucial time. Sure, it’d make a great movie, but like the James book, probably too full of inside stories that should never be told. I know Gene and he’s a true survivor and great musician. I still fondly recall a few years back at a Donnie Kehr – Rockers On Broadway show where he performed … and, he blew the crowd away with his antics. Fiery on stage for sure. It was a magic moment … And, still no Frampton book to review.