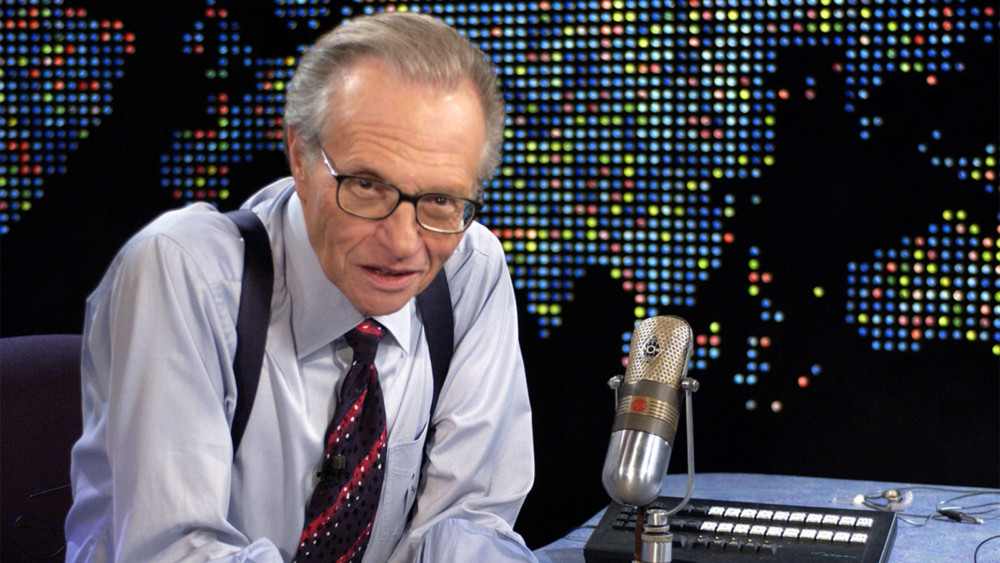 THE KING IS GONE — Larry King has passed. After a remarkable 60-year career in broadcasting the King has left the building.

When the news was announced Saturday morning, I wondered how in depth the reporting would be. When I returned home after a vaccine attempt (in which I was successful), it was literally wall-to-wall. His home base for more than 25 years, CNN, had literally all-to-wall coverage and interviews with the likes of Billy Crystal, Robert DeNiro and Debbie Allen. CNN-chieftain Jeff Zucker released an appropriate statement as well and the cablenet ran an hour special that night. King in his heyday, had Larry King Live on CNN and it was essentially destination television.

CNN founder Ted Turner (who you sadly don’t really hear from all that much anymore) said the best decision he ever made was hiring King.

I remember when Princess Diana died, I arrived home, turned on CNN and there was King … interviewing my friend Aubrey Reuben of all people. When you were on King, you definitely had arrived. From Jerry Seinfeld, to Marlon Brando, Tom Cruise and Robin Williams … he interviewed them all and so beautifully too. King put you at ease and thus, engendered a terrific interview.

King’s producer at the time, Tamara Haddad was feared, but a great, great producer. You know, all these legendary TV figures (unfortunately leaving us), they all had a great producer to make it all work. Haddad was feared, but just terrific. Would King have been so monumental without her? We’ll never know. On a side note: I’m surprised she’s not gotten more recognition and am a bit saddened. The two were a formidable pair.

There was a great piece in the New York Post yesterday, on an intern who worked with the both of them. Great piece, here it is: https://nypost.com/2021/01/23/larry-king-through-the-eyes-of-a-young-intern/

Larry King was everywhere. He also had a column in USA Today, (1982-2001) in which he talked about everything; from his daily breakfasts at Nate ‘n Al’s in LA, to his favorite guests. As a column, it was all over the place … but totally King.

Larry King … one of a kind. RIP

LA STANDARD CLOSES — (via Alison Martino) Just read the STANDARD on Sunset Strip is closing tomorrow. From a motel to a nursing home to a high end hotel, I wonder what the next chapter will be. Just hope this original mid-century building doesn’t get torn down.

The Standard was originally built in 1962 as the Thunderbird Motel. A few years later in became the Hollywood Sunset Motel. When Andre Balazs purchased the property it was a retirement home called the Golden Crest. Thankfully he kept the entire structure intact and added hip retro deco. I had some wild times there when it first opened and a few shoots over the years.

The Standard in LA was a great spot. During my LA-visits, I used to stay first at the Beverly Wilshire on Rodeo Drive. It was a nice – they had nice, comfortable rooms and a fabulous pool and I’d often see Warren Beatty ambling through the lobby late at night, headed to his private bungalow in the back. Then, Mondrian on Sunset became my usual spot. I absolutely loved that hotel and became friendly with the owner of the time. When he sold out to Ian Schrager, it became a bit too overdone and on a friend’s tip, I moved down the street to The Standard.

The venue, formerly owned by hotelier Andre Balazs, who also owns the nearby Chateau Marmont, opened in 1999 with the financial support of Leonardo DiCaprio, Cameron Diaz, and Benicio del Toro, among others. The site’s showbiz roots were reflected in its interiors, originally created by film set designer Shawn Hausman.

With a DJ in the lobby and several great restaurants and just a great vibe – this became my West Coast-based home when I was out there. Also, the blue astro-turf pool side was an inspired addition too.

Sad to day, the pandemic has forced several hotels to shutter in LA (Chateau Marmount has not re-opened since the pandemic either) and I’m afraid that will continue. I hear two other grand establishments will close in the next several weeks. But, boy, The Standard (which had a 22-year run) was fun. I’ll never forget it.

SHORT TAKES — NBC’s Tom Brokaw officially announced his retirement Friday; after a 55-year career at the network. Though his last few years have been shrouded in controversy, he was a great broadcaster. Cheers Tom! …

A big favorite of ours Don Johnson is in the new NBC comedy from Keenan Thompson called. Keenan. Here’s NBC’s description of the show: This comedy follows a widowed dad, Kenan (Kenan Thompson), who’s juggling a high-profile job as the host of an Atlanta morning show and raising his two girls. As Kenan tries to move on, his father-in-law (Don Johnson), brother (Chris Redd) and co-workers all have strong opinions on the best way to live his life. The show centers on the familial relationships as Kenan tries to reclaim his life after his wife’s death. Kenan’s daughters are his world – the too smart Aubrey (Dani Lane) and the silly, unpredictable Birdie (Dannah Lane). He struggles to balance parenting them as a single dad and hosting his show, which leads him to reluctantly accept help from his father-in-law, Rick. How’s that sound? It premieres February 16 …

And, Watched Regina King’s directorial debut One Night In Miami and found it terrifically fascinating. It imagines a meeting in Miami with footballer Jim Brown; singer Sam Cooke; Malcolm X and Cassius Clay – soon to be Muhammed Ali … after he wins a major fight. The foursome discusses their various roles in society and the cultural upheaval going on around them. Being a devout Sam Cooke-fan, I was surprised to see the producer of the movie as ABKCO films. The much-talked about manager Allen Klein was ABKCO and he was the gatekeeper to most of Cooke’s work. In fact, as we meet Cooke, he has just checked into Miami’s legendary Fountainbleu Hotel and later mentions that Allen Klein booked him into it. I had read several reviews before viewing it, that said it was a tad too talky. I think it was a miraculous idea and apparently as based on a play by Kemp Powers. King’s done a serviceable job. Nothing terrifically fancy, but one sequence on the roof of the motel where the four meet, with fireworks going off in the background –and, possibly because of Clay’s win- is magnificent. Kingsley Ben-Adir as Malcolm X is sensational as is Leslie Odom Jr. as Cooke. Aldis Hodge, essaying Jim Bown is terrific too. A must see.