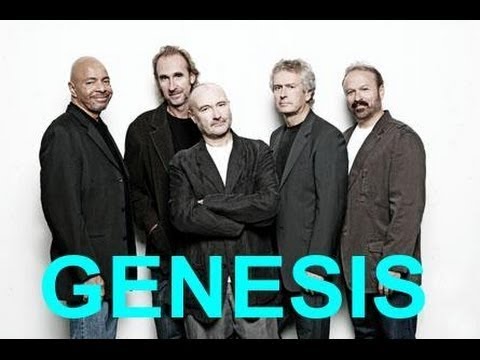 GENESIS RETURNS — (via Roger Friedman/SHOWBIZ 411) Phil Collins and Genesis are bucking the pandemic trend and going out on tour beginning this November. Collins and Genesis, meaning Mike Rutherford and Tony Banks, along with Nic Collins on drums, and the band’s long-time lead guitar and bass player Daryl Stuermer.

So, it’s also a Mike and the Mechanics tour. Too bad Peter Gabriel isn’t along for the ride!

It’s the first Genesis tour in 14 years. Phil has been married, divorced, remarried, divorced, I can’t keep count. He’s also had health problems, so it’s surprising that he’s hitting the road, and the skins.He’s had among other things crippling nerve damage in his back and legs, and battled pancreatitis.

But he’s only 70– “only!”– much younger than other rock stars of his era, so why not get out there?  All that domestic strife means he needs dough that’s clean from golddigging.

This was the big music news of the week, but Roger Friedman said it best. Genesis are great – maybe the first prog-rock band ever. Too bad, drummer Chester Thompson isn’t on this tour as he really brought the music to a new level. He’s from Weather Report!

I do hope they perform some older Genesis numbers. “Watcher Of The Skies” perhaps? Watch for the DVD of teh tour to come fast and furious.

Whatever …. this is a must=see show!  Check out this trailer of the tour rehearsals:

WHAT IS JEOPARDY? — (via Deadline) A group of 467 alleged former Jeopardy! participants issued an open letter on Medium Wednesday, demanding an apology from the show producers for not catching a Jeopardy! winner allegedly flashing a white power hand gesture.

“A recent contestant has caused concern among ‘Jeopardy!’ viewers for two separate occurrences, and we, as former contestants, feel the need to speak out against the messaging that these choices communicated — either intentionally or unintentionally — by the contestant Kelly Donohue and, implicitly by association, the producers of ‘Jeopardy!’” the story said.

On Tuesday, Donohue “held his thumb and forefinger together with his other three fingers extended and palm facing inward, and he tapped his chest.” Donohue claims he was indicating that he’d won three games, and had gestured with one finger and two fingers to indicate previous wins.

However, the third time was not the charm. The Medium story claimed the move was similar to a  gesture used by white power groups, alt-right groups, and the anti-government Three Percenters.

“A couple of years ago, a contestant unintentionally wagered a monetary amount that used numerical values coopted by white supremacist groups and, since the total didn’t affect the outcome of the game, ‘Jeopardy!’ digitally altered the numbers in the version that aired,” the Medium letter claimed. “This should have been done in this case. Intentional or not, the burden was on the production team to catch the similarity to a hate symbol and make sure it didn’t end up on air.”

There were also complaints that Donahue used a slur against the Roma people on the Monday show.

The letter demanded “a statement and a disavowal of both of this week’s events.”

“We know that contestants sign morals and ethics-related agreements when they prepare to appear on the show, and we would ask the production team to evaluate this situation within that framework,” the letter concluded. “Finally, we hope to see changes made so that future mistakes of this magnitude never make it on air.”

Jeopardy! representatives have not yet issued a comment in response to the letter.

I watched all of the proceedings and when this fellow was introduced, something was definitely off. Most of the 105 comments posted on the Deadline site gave him the benefit of the doubt … still, there was something off.

SHORT TAKES — Kathy Lee Gifford got a star on the Hollywood Walk of Fame Wednesday. 5 stars away from Regis. Congrats … We’re liking Anderson Cooper on TV’s Jeopardy. Their ratings are still in free-fall, but Mr. Cooper is great …

Project Grand Slam’s Robert Miller, whose “Tree Of Life” track vehemently speaks to the ongoing gun violence in the country, says he’ll re-release that track each time there’s an additional incident. Bravo. Soprano-Robert Funaro appears on his podcast, Follow Your Dream, in two weeks … Rumors coming out of NY’s Long Island that Michael “Eppy’ Epstein may not be moving forward with shows at his My Father’s Place – now located in The Roslyn Hotel. Stay tuned …

Apple TV+ has unveiled the first teaser for its 10-episode original dramedy, Physical, which premieres globally on June 18. Created by Annie Weisman (Almost Family), the half-hour dark comedy centers on Sheila Rubin (Emmy and Golden Globe nominee Rose Byrne), a seemingly dutiful, though quietly tortured housewife living within the idyllic yet fragile beach paradise of 1980’s San Diego. Publicly, Sheila supports her smart but controversial husband, as he makes a bid for state assembly. But behind closed doors, she has her own darkly comedic take on life that she rarely lets the world see. Battling a complex set of personal demons related to her self-image, Sheila finds a necessary release in the world of aerobics. Subsequently, she finds herself on a road to real empowerment, when she finds a way to merge her passion for the exercise with the burgeoning technology of videotape to start a revolutionary business. The series tracks her transformation from a stifled, overlooked enabler to a confident and powerful lifestyle guru—someone we take for granted today, that was entirely radical in her time. Physical also stars Rory Scovel, Dierdre Friel, Della Saba, Lou Taylor Pucci, Paul Sparks and Ashley Liao. Bryne is simply terrific. Having caught her in the play Medea with husband Bobby Cannavale, she definitely got skills. Check out the trailer here:

The first three episodes of Physical will debut on Apple TV+ on the 18th, with one new episode then streaming weekly, every Friday … This week’s Big Sky was superb. I am missing Carroll Lloyd for sure, but Ted Levine is excellent … And, Happy Bday to Beth Wernick and Bill Schill!