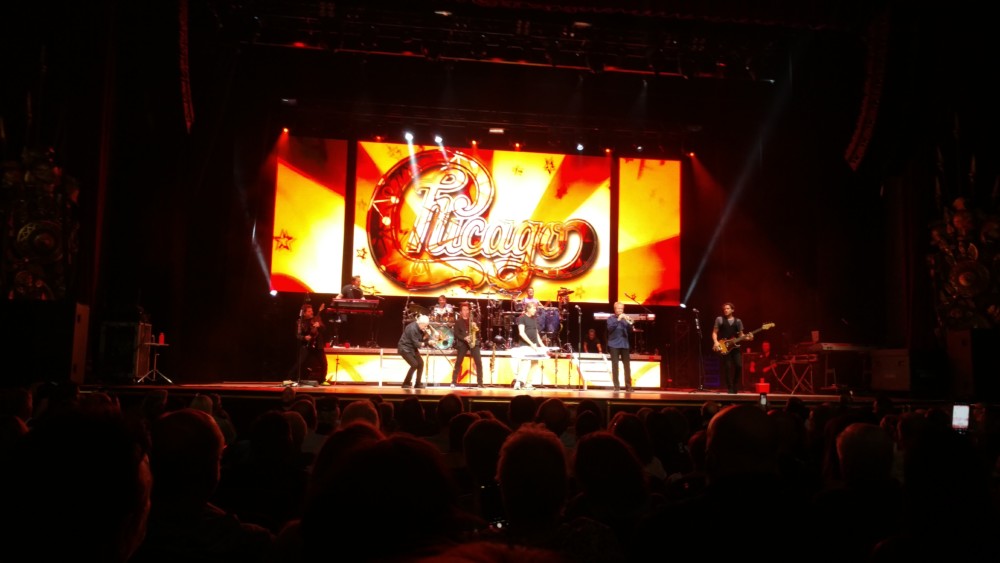 CHICAGO CHICAGO — How does a band that’s been together for 53 years keep doing it? I’ve seen Chicago many times over the years (never with the late-Terry Kath, sadly) and they’ve never once let me down.

I remember well one show at the late-great BB King’s in NYC and it was just astounding. Three years back, I believe it was with co-headliner Earth, Wind and Fire at Madison Square Garden and they were just sensational and two years back at Jones Beach.

Their show is divided into two parts: The first half saw them do “Question 67 and 68,” “If You Leave Me Now” and the always sensational “Colour My World,’ with a great lead vocal by trumpet-extraordinaire Lee Loughnane.

I also have to add that the interplay between Loughnane and James Pankow (trombone) is just stellar. Pankow’s onstage  antics are a downright riot!

The second set delivered every single Chicago hit you wanted to hear: “Does Anyone Really Know What Time It Is,” “Beginnings” and a fantastic cover of “I’m A Man,” which is rumored to be the only cover the band ever did. Just sensational arrangements and performance’s.

Me? I’ve been a huge Robert Lamm fan since about 1974, when his first solo album Skinny Boy came out. Now 76; he looks and plays as good as ever and his voice remains unchanged.

I’ve got to tip my hat to longtime Chicago manager Peter Schivarelli, who continues to keep the band relevant after 53 years with an always improving concert production, TV appearances, new albums, and when they lose a member, his track record of bringing in a replacement who is equal or improved is quite impeccable.

Seen in the crowd: WOR’s Tom Cuddy: radio’s Howard Hoffman; PR-man David Salidor; and, even MSG prexy Jimmy Dolan sitting near the front of the stage. It was, just a sensational night.

THE FIRST NIGHT OUT — This was actually our second music night being out in a month and seeing some live music; the first being Romeo Delight at Steve Walter’s Cutting Room … but, Chicago at The Beacon Theater was just electric. I distinctly got the feeling that Chicago was as happy as everyone in the audience.

I met someone on line, in a Soundgarden t-shirt no less, who said that the night before he had just caught guitarist John Scofield at The Blue Note and had never seen Chicago before. Eclectic tastes for sure, but I assured him he was in for a good show.

Everyone I saw and met (even in line!) was grateful for being able to do this again. I hope it lasts as I don’t know if I could go through another 13- month shutdown.

And, Micky Dolenz’s ZOOM-interview on Australia’s Studio 10 was exceptional too. Check it out here:

Loved Roger Friedman’s review of HBO’s oh-so-odd White Lotus: Fantasy Island with balls! Couldn’t have said it better myself … Much chatter about a new Star Trek movie, to be directed by the director of WandaVision Matt Shakman.

Chris Pine who essayed Captain Kirk in the last few reboots is included in this new production. I hope Zachary Quinto is as well. Thought he was exceptional playing Spock … “One Step Closer” by Debbie Gibson is out today. Another Tracy Young remix-check it out … Heritage Classic of the day: “Lonely Boy” from  Andrew Gold – 1976: https://www.youtube.com/watch?v=iq2TxnlWunw&list=RDiq2TxnlWunw&start_radio=1… and, RIP Gary Corbett.

G. H. HARDINGSeptember 12, 2022
Read More
Scroll for more
Tap
Win an Epic Stay in NYC
The All-Asian American Production of A Gentleman’s Guide to Love and Murder is a Delight.