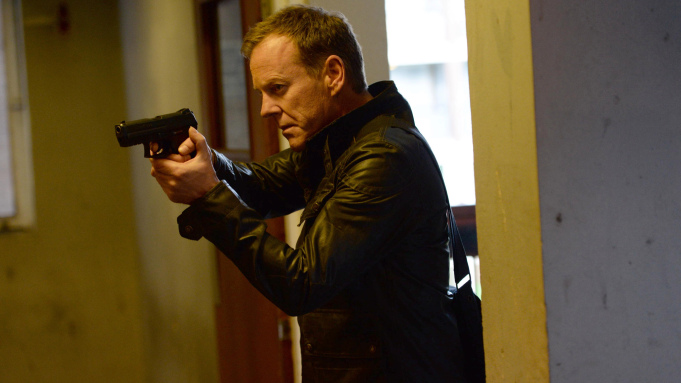 JACK’S BACK — (Via Deadline) Jack Bauer could well return.

There are currently “active creative discussions” about bringing back classic Kiefer Sutherland-fronted terrorism drama series 24 with a new take.

Fox Entertainment President Michael Thorn told Deadline that there is “potential” that the show will return in some form.

“There’s still a possibility, there’s still some discussions with the producers on a take that we have yet to hear,” he said. “There [are] some active creative discussions that are happening.”

Thorn’s comments echo recent words from 24 executive producer Howard Gordon, who told Deadline in a recent interview that a new take on the series is “always percolating.” Gordon said that he loves the character but cautioned “it’s not official, sort of, until I think all the pieces come together.”

24, which was created by Joel Surnow and Robert Cochran, launched on November 6, 2001. Starring Sutherland as counter-terrorist agent Jack Bauer, the series ran for eight seasons — and spawned a two-hour movie — until 2010. A 12-episode limited series aired in 2014 and was followed in 2017 by a Corey Hawkins-fronted spin-off, 24: Legacy. That ran for one season.

The show is produced by 20th Television and Imagine Television.

Last year, Thorn hinted that a new incarnation was in the works with The Resident showrunner Todd Harthan, which itself followed a couple of 2019 takes including a real-time legal thriller written by Gordon and Jeremy Doner and a prequel that traces the origin story of CTU agent Jack Bauer, from Gordon and Surnow and Cochran. However, none of these projects are still in the mix.

Thorn added that the network is always interested in hearing new takes on its classic shows. He said that he’d “love to do more” Glee, particularly given its new series The Big Leap, shares a DNA with the musical drama, but that he hadn’t heard new pitches for that or another classic Fox show, Prison Break.

“We always welcome celebrating our iconic shows and revisiting those with surprising takes and new approaches so, especially in this crowded market, we’re always open to reinventing our best IP with some of our favorite partners,” he added.

I’ve always loved Sutherland’s work, with Flatliners at the top of my list for him. And, his work in 24 just exemplary. He’s a winner for sure. I’d love to see 24back, but with a relevant and intriguing story line. When we last saw him, he had given himself up to the Russians. I guess the first show would be spent explaining what happened there.

Would love to see the return pf Jack Bauer.

IS THE MAC BACK — In the last week, there’s been two new Lindsey Buckingham interviews and a rather prompt response from Stevie Nicks. Buckingham’s two interviews centered around a new release for him on Rhino, but also featured heavy comments on his abrupt dismissal from Fleetwood Mac in 2018 … and, on his ever-evolving relationship with Nicks.

He documented his relationship with Stevie Nicks and compared her actions to that of Trump and the Republicans and made several other rather nasty comments.

I have to tell you that as a major Fleetwood Mac fan, I kind of found all this fodder rather disingenuous. I mean, when Rumors came out and everyone was sleeping with everyone else, it was intriguing … but, now, all these years later, I don’t’ know if I want or care to hear about it again.

Buckingham’s been through a lot of late: heart attack; surgery; ousted from the band … so, he’s ripe for conversation … and, he has new product to push.

Even Showbiz 411’s Roger Friedman found it all a bit much, saying “Then Buckingham and Nicks arrived. Suddenly everyone in the band was sleeping with everyone else, and yapping about it in the press. B&N brought their own little soap opera. That was 45 years ago, and it’s still going on. Before that, I’d like to add, Fleetwood Mac was about music.”

I wholeheartedly agree. The Mac is about the music. Could it be a PR-ploy? For sure … but, sometimes these PR-gambits go a bit overboard. It’ll be interesting to see what happens. I’ve heard some of Lindsey’s new album … and, it sounds like all his others. Creative, competent … but, the same.

SHORT TAKES — There’s a forthcoming autobiography on Stephen Bishop coming next May, titled Off And On. If you’ve followed the Bish, this has just got to be a terrific read. From Carrie Fisher, to Christopher Cross, Phil Collins, and Animal House, I can’t wait to read this one …

Remember Brian Robbins in TV’s Head of the Class (1986-1991) as smart alecky Eric Mardian? He’s gone on to have a pretty prolific career in TV.; including running Nickelodeon. Well, he’s the new president of Paramount …

The Monkees Farewell Tour kicked off Friday night in Spokane, Washington; followed by two more shows in Seattle and Oregon. Reports are that Dolenz is at the top of his game and sounding better than ever. Kicking off with “Good Clean Fun,” they did a deep dive into their outstanding catalog. Chestnuts like “Mary Mary,” “Love Is Only Sleeping” and Michael Nesmith’s “Circle Sky” (fromDolenz’s sensational 7a release Dolenz Sings Nesmith followed. They also performed “Death of an Accidental Hipster” and  Ben Gibbard’s remarkable “Me & Magdelena” from their Good Times album. They encored with “Listen to the Band” and “I’m A Believer.” They’ll be here in NYC at Town Hall on October 24 and I cannot wait …

The movie version of Dear Evan Hansen screened at the Toronto Film Festival and according to sources tanked … big time. They said the big problem was star Ben Platt on the big screen just doesn’t look like a high school student; he could get away with onstage in a theater, but not on the silver screen … And, Happy Bday Marsha Stern & Sharon White!