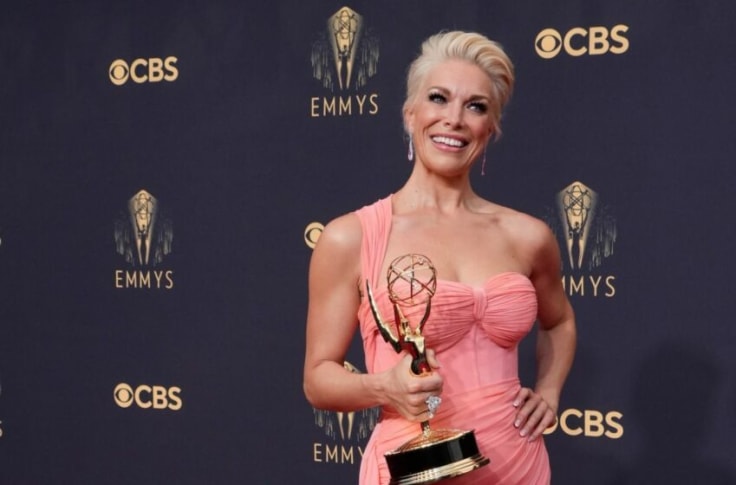 EMMY NIGHT – Sunday’s big Emmy night was a much, more reserved affair with a limited number of tables and staging. Actually, I really enjoyed the more intimate proceedings – clearly dictated by the never-ending pandemic.

Wins for Hacks; The Crown; The Queen’s Gambit; Kate Winslet; and the irrepressible Ted Lazzo-contingent were richly deserved. It actually appeared as if the entire Lasso-crew was there, which was nice. Hannah Waddingham from the show, won first and set the Lasso-crowd into overdrive. She’s a doll.

Jean Smart’s win for Hacks was well deserved; what a great, great show. The writing (which also won) is just impeccable.

Catherine Zeta-Jones with Husband Michael Douglas looked sharp too; as did Jennifer Coolidge and Kaley Cuoco. To my mind, Cuoco and Douglas should have won, but it was great just seeing them in person. For my money Douglas is just a splendid actor: his performance in Behind The Candelabra just the tip of an exemplary career; including The China Syndrome; Wall Street; and Fatal Attraction – sheer perfection in my book.

Face it, awards-shows have changed forever. Expect similar initiate settings like this from here on out.

Perhaps the biggest and most welcomed surprise was SNL-overlord Lorne Michaels saying ‘Jason Sudeikis would indeed return to SNL in some form.” I think he’ll host the opening show.

BEARD AFTER HOURS— Speaking of Ted Lasso; their stand-alone episode last Friday night, Beard After Hours, was superb. Clearly, everyone wasn’t going to love it. But, Coach Beard’s night out on the town after his team’s devastating Wembley loss was just exquisitely done; and, Brendan Hunt (Beard) pulled out all the stops.

I immediately recognized the parallels to one of my all-time favorite movies, Martin Scorses’s After Hours; with the brilliant Griffin Dunne, but there was one other prominent reference, to David Fincher’s Fight Club all of things. It was a bit similar to their Xmas show,  which called out several references to the movie Love Actually – Elton John’s Xmas party in fact. And, boy, did some people hate that episode.

I know quite a few people who have taken to tasks these stand-alone episodes, but they just have to develop the other characters.

Sorry, but I loved it!

SHORT TAKES — We haven’t mentioned Nine Perfect Strangers on Hulu, but I am loving it. Written by Lianne Moriarity, who wrote Big Little Lies, and produced by Nicole Kidman, it certainly has a lot of the same feel as Lies, but this story, chapter by chapter, became bit more frightening. David E. Kelly wrote it and much of his charm and panache is certainly in evidence here. The players are great, led to a stunning turn by Melissa McCarthy, of all people. It’s gregarious as is her wont, but also sensitive and very affecting. To tell you the truth, it’s the first thing I’ve seen her in where she’s stellar. Bobby Canavale too is superb; as an ex-football player now struggling to rescue and recover his life. Luke West is here too and simply superb. All them are  broken and trying to recover in some way. Great show for sure  … Is the new James Bond No Time To Die really opening up on October 8? Seems so. I’ve been looking forward to this one for quite awhile now. Can’t wait … We watched the first episode of Season 2 of Apple’s The Morning Show and found it a tad flat, especially compared to their stellar first season. we’ll chalk it up to the long wait between seasons, but, what happened to Reese Witherspoon’s dark hair and her accent? Billy Crudup still shines though and is downright terrific  … Christopher Gilman segues from the Beverly Hills Palm to Nic and Stef’s downtown in LA. We haven’t sampled it yet, but there’s an outpost of the restaurant at Madison Square Garden here in NYC. Congrats …

Suzanna BowlingJanuary 11, 2023
Read More
Scroll for more
Tap
The Death of Sex In The City’s Willie Garson Brings Out What Has Happened to This Country
Taste of Upper West Side Returns