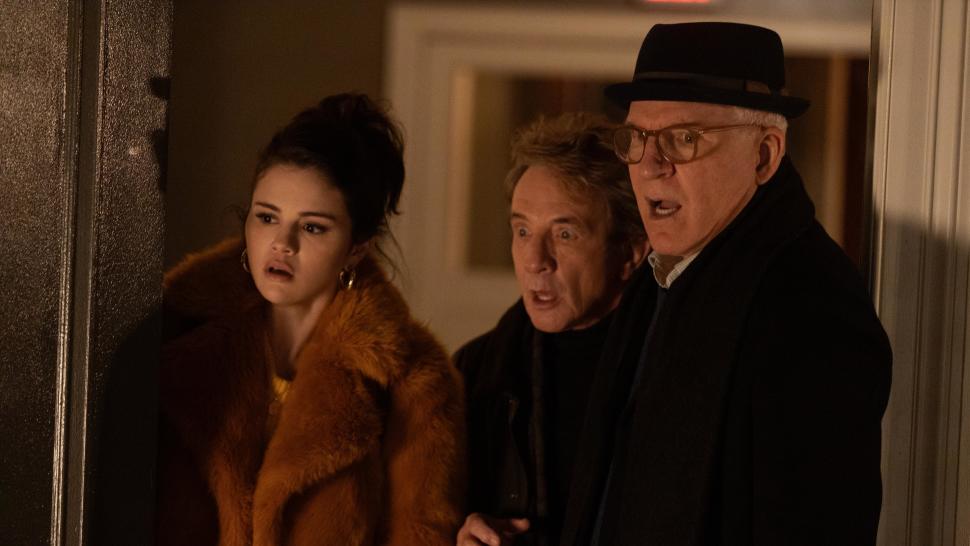 MARTIN’S MARVELOUS MURDERS ENDS SEASON ONE — Steve Martin’s Only Murders In The Building (Hulu) just ended its first season and what a beautiful one it was. Steve Martin is nothing short of a genius … I’m a huge fan.

From The Jerk to the underrated LA Story; Bowfinger; Roxanne and Father of the Bride, he is without a doubt one of the comedic geniuses ever.

Murders, with Martin Short, was to me, the culmination of everything Martin has ever done: A brilliant plot; terrific actors (including a stupendous Nathan Lane; Jane Lynch and, a terrific turn by Sting) and just sensational writing. Martin didn’t write every episode, but you could feel his voice in everything. He came up with the idea with John Hoffman.

Also just exhilarating was Selena Gomez; who I’ve liked before, but here was just delightful as Mabel. Short was his usual brilliant self (I loved that his hair was in a different style in almost every scene) as a Broadway director who career-ender was a Broadway version of Splash!  The two are just sensational together.

The finale episode (Open and Shut) brilliantly wrapped up the season’s big question and set in motion Season Two. Just terrifically done. Immediately in the top 5 of what I’ve seen streamed in the last two years.

BRISCUSSE PASSES — We lost a giant for sure. From Showbiz 411: Leslie Briscusse co-wrote so many famous songs from movies, Oscar winners, nominees, chart hits and so on. He died on Tuesday at age 90.

His most famous pairing was with Anthony Newley (who was also married to Joan Collins for quite a while), but he wrote with others as well. They wrote several hit Broadway shows including “Stop the World I Want to Get Off” featuring the perennial “What Kind of Fool Am I?” That song won a Grammy in 1963. In 1968 he won an Oscar for “Talk to the Animals” from “Dr. Dolittle.”

Two of James Bond’s greatest hits, “Goldfinger” and “You Only Live Twice,” were his. So were the two famous songs from “Willy Wonka.” Both “Pure Imagination” and “Candy Man” were written by Briscusse.

Briscusse wrote several hits with the legendary Henry Mancini including “Le Jazz Hot” from “Victor/Victoria” in 1982. Briscusse had 8 Tony nominations and 5 Oscar nominations.

That we’re all still singing his songs, at least humming them, all the time, is a great legacy.

Music today, is somewhat askew. The records that are hits really aren’t songs at all – they were written by committee.. All those songs above … were true songs. The term singer/songwriter you never really hear anymore, but I have no doubt that it will return someday. When? I have absolutely no idea.

SHORT TAKES — Rolling Stone Magazine going monthly; at a price of $10.00. I guess the 60’s are back as they must be smoking something up there. When creator Jann Wenner sold the magazine some years back, I knew its days were numbered. Like Billboard, they may have the cachet, but not the wisdom to make it work. Sad for sure …  No matter your opinion of Alec Baldwin, what happened Thursday night in Santa Fe, is a tragedy. Sad all around. For better or worse, it’s something that will follow him forever …

Season 9 of NBC’s The Blacklist premiered, the first one without with Megan Boone, and I thought it was just terrific. There was a two-year time jump and the episode was essentially getting the dis-banded band, back together.

Spader was just in three scenes, but boy, did they burn with his patented intensity. Now, with a shaved head (and, based in Havana) and 2 shaman disciples, he was awfully compelling. Interesting, Harry Lennix, had a much expanded role and he was just great. A terrific actor, I always wondered why they didn’t give him more to do. Opinions were split about 50/50 as to whether this was a good episode. It was …  Freda Payne and Mark Bego speak to Australia’s Plastic and Kevin Hiller this week as their Freda Payne: A Memoir (Yorkshire Publishing) is out on November 2 … SIGHTING: