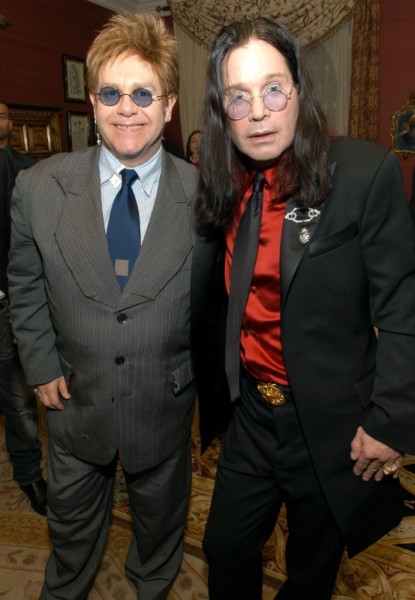 Earlier this week, Sharon Osbourne said to Ultimate Classic Rock that Ozzy and John were working together, but she didn’t provide any details. The Red Hot Chili Peppers drummer, who plays on the record, has now revealed some inside information about the session.

Speaking to Lyndsey Parker on their SiriusXM’s Volume West show, Smith said “Ordinary Man” was “more mid-tempo-y, kind of Beatles” than what’s normally expected from Osbourne.”  Producer Andrew Watt, he noted, “had this little piano-idea thing, and we made it into this song, and its epic. It’s so epic there’s two Slash solos!”

When they started to look for someone who could play piano, Smith recalled the conversation: “‘Let’s get the rocket man. Do you know Elton?’ ‘Yeah, we know Elton.’ They know everybody, all the English rock royalty. Andrew and I went down to Atlanta, where Elton John lives when he’s on the East Coast — I think he’s kinda all over the place — and we recorded him, and he plays piano on the song, and he [does it] beautifully, of course. And then we’re like, ‘Why don’t we have him, like, sing a verse?”

Smith said the result is “fucking awesome.” “They’re singing — these two iconic, legendary English fucking rockers that have been through it all — about the end of their lives: ‘I don’t want to die an ordinary man,'” he said.

The drummer then showed how he and Watt could barely contain their excitement in the control room. Smith referred to John as “so great, so gracious,” and recalled the music legend saying, “I’ll do anything for Ozzy. I love Ozzy.”

Smith said they eventually went to Abbey Road Studios to overdub a string section and a choir to complete the track.

It’s the track of the week in my book; actually, eerily similar to Duran Duran’s “Ordinary World,” but just a great song.

MASON ON LEFSETZ — Former lawyer-and, music biz wash-out Bob Lefsetz, whose weekly Lefsetz Letter is always good for a laugh or two, had Dave Mason on his most recent podcast. I’m a huge Dave Mason fan from way back, but had to wince more than once during this interview. First, Mason sounds like he’s being held hostage at gun point throughout, and, secondly: Lefsetz not only gets much of his information incorrect, but, when he asks Dave about his interaction with Bob Krasnow, of Blue Thumbs Records and Dave hesitates, Lefsetz says, hey, Krasnow’s dead … say what you want. The two famously fought over Mason’s work on Blue Thumb and clearly never resolved their issues, but, still, Lefsetz should’t utter something like that.

The late-Krasnow, at Blue Thumb and Warners, was once of the music industry’s true innovators. Mason still showed some respect; Lefsetz did not.

Lefstez tried to engage Dave in some facts which were untrue and even tried to get him to put down Chris Blackwell – another music innovator. And, nothing about Mason’s stint in Fleetwood Mac.

It sounds like he needs a good producer (maybe two) and proved himself even more embarrassing than radio-wag Brett Winterble.

The former-lawyer, who sounds at times like a 12-year old kid, should do his homework. Super shoddy for sure.

Legendary dance-music artist D. C. LaRue will be a special guest performer at Wendy Stuart Kaplan’s BDay fete January 24 at Bedlam; he’ll perform “Cathedrals” and “Hot Jungle Drums.” Stuart guests this Friday on Zach Martin’s Big Fat American podcast … Re-connected with one of the best writers and nicest writers around last week, David Hinckley; late of theNew York Daily News. Now writing for Slate.com. He had just interviewed Micky Dolenz for Mick’s upcoming shows at My Father’s Place in February. Good guy for sure … Remember 1986’s Running Scared with Billy Crystal and Gregory Hines? Don’t worry … it was a cute 80’s romp, but came and went without a flourish.

That said, it contained one terrific song, “Sweet Freedom,” sung by Michael McDonald and written by Rod Temperton. Still solid, take a listen! There’s some big news brewing from Donnie Kehr’s Rockers On Broadway; expect a big announcement later this week from Kehr and partner-Cori Gardner …

Buddy Blanch’s Romeo Delight, the ultimate Van Halen-tribute band, played Saturday night at Daryl’s House in Pawling, new York. we’ll have a full report on Wednesday … Speaking on Van Halen, David Lee Roth opened a solo-residency at the House of Blues in Las Vegas last Thursday. Early reports were good, though Roth did fumble several lyrics on some favorite songs. Next up for Roth, opening for KISS on their farewell tour … Reporter On The Road-journalist Mark Scheerer (and, all around nice guy) at Robert Miller’s Project Grand Slam performance at The Groove after their APAP show (NY Hilton) Saturday … Speaking of the APAP show: Also seen were: Wendy Kaye; Steve Leber and PR-pasha David Salidor … We received the new book on Star Trek’s William Shatner, Shatner (Applause), and its a terrific compendium of the Shat’s work, including his first album The Transformed Man (released on Decca in 1968).The (transformational) album is best remembered for showcasing Shatner’s now-famous vocal style—spoken word with dramatic pauses and flourishes. In the decades since its release, most of the album’s tracks have been used satirically, either on compilation albums meant to showcase bad celebrity singing (the Rhino Records “Golden Throats” series) or by radio disc jockeys looking for laughs. On the other hand, many praise the album in the genre of spoken-word music.  Me? I loved it … especially his take on “Lucy in the Sky with Diamonds.”The book, written by the New York Post’s Michael Starr; is a terrific read. Whether you’re a fan or not  of Shatner’s, he’s still here … At Saturday’s Sketchfest in San Francisco, Micky Dolenz read from the biographies of Michael Bubble; the Jonas Brothers and Justin Bieber! Amazing …RIP Neil Peart!