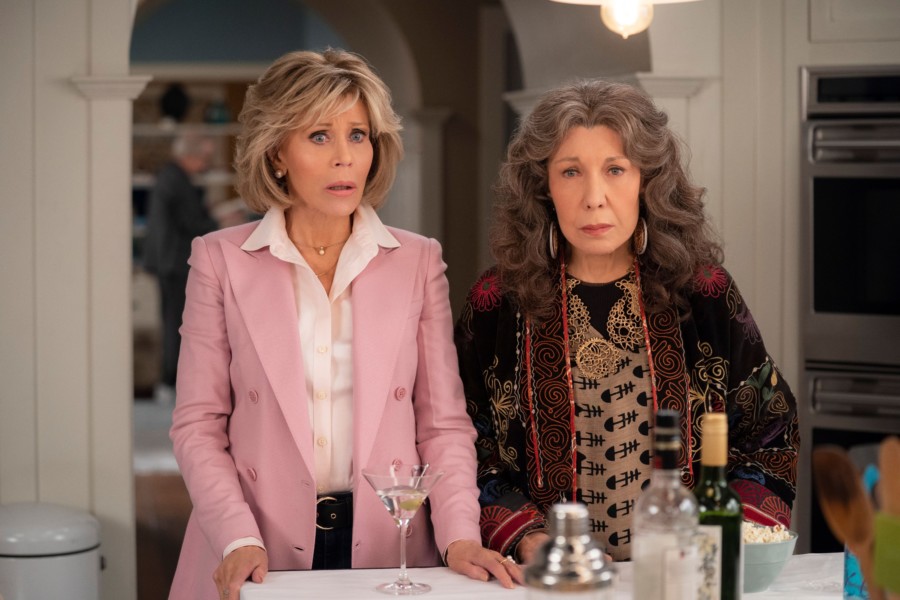 A 9 TO 5-ER — (Via Deadline) Judy, Violet and Doralee will be together once again. Dolly Parton will join her 9 to 5 co-stars Jane Fonda and Lily Tomlin as a guest star in the series finale of Netflix’s Grace and Frankie. Character and plot details are not being revealed.

The first four episodes of the seventh and final season are available for streaming now, and the final 12 episodes will premiere in 2022 on Netflix.

The news comes as production on the series wrapped earlier this week.

Fonda and Tomlin star as Grace and Frankie, respectively, along with Sam Waterston, Martin Sheen, June Diane Raphael, Brooklyn Decker, Baron Vaughn, Ethan Embry, and Peter Gallagher, who all reprise their roles in the seventh and final season.

The series launched with Grace and Frankie’s lives being turned upside down after their husbands reveal they are gay and leave them for each other. Both sparring partners and partners-in-crime, Grace and Frankie form an unlikely and unbreakable bond and face their uncertain futures head-on, hand-in-hand.

When it wraps, Skydance Television-produced Grace and Frankie will make history as the longest-running Netflix original series ever, out of both comedy and drama, with 94 episodes.

The 1980 film 9 To 5 starred Fonda, Tomlin, and Parton as three working women who live out their fantasies of getting even with and overthrowing the company’s autocratic, “sexist, egotistical, lying, hypocritical bigot” boss, played by Dabney Coleman. The film, which grossed over $103

Grace and Frankie was a delight from the start. Fonda and Tomlin, not to mention Sheen and Waterston were spot-on perfect. Sure, the plots bordered on silly (the pair developing a new female sex aide for one), but the acting prowess from the ensemble made it all work.

Fonda and Tomlin are reportedly set for two movies and let’s bring Waterston back to the re-boot of the original Law & Order, OK?

PRESTON IN THE SPOTLIGHT — White Horse Pictures and Homegrown Pictures have teamed on an untitled documentary feature about the legendary musician and genius keyboardist Billy Preston. He was called the Fifth Beatle, because he the only non-member ever to be credited on a Beatles recording. He had plenty of his own hits and co-wrote the song Joe Cocker made famous, You Are So Beautiful. Fifteen years after his death in 2006, Billy Preston was inducted this past weekend into the Rock & Roll Hall of Fame.

Said Allain: “A singular figure in music history, Billy Preston lent his genius to elevate the most celebrated artists of the 20th Century. Grateful to work with this team, using this soundtrack to explore his personal journey and finally place him front and center.” Barclay said “the Billy Preston we know was an incomparable musician,” but the Billy we’ll see in this documentary was a mass of contradictions. I’m thrilled to dig deeper into the complex man under the Afro, and behind the famous smile.”

A self taught prodigy keyboard player, Preston was just 16 when he met the not-yet-famous Beatles while playing for Little Richard while they toured Hamburg in 1962. He befriended the young, impoverished band by sneaking them food and drinks. Later in the ’60s, this led to Preston playing on The Beatles’ Let It Be and Abbey Road albums as a credited musician, and performing with the Beatles in their last live performance as a group – the famous Roof Top concert. The Grammy Award-winning artist had solo career that included number one hits, and working with The Rolling Stones, Red Hot Chili Peppers, Nat King Cole, Sly Stone, Barbra Streisand, Ray Charles, Sam Cooke, Aretha Franklin and Mahalia Jackson, among others. Preston is featured in the upcoming Peter Jackson-directed documentary The Beatles: Get Back.

Despite an enviable career in music, Preston  had a challenging personal story that involved sexual abuse he endured as a child. He struggled with his sexuality and had substance abuse problems he used to make his pain. Only later in life did he come to terms with his truth and so find his peace.

Barclay and Hodari Coker asked to make a shout out to those who knew Preston or worked with him, who and may have recordings, photographs, or personal memories to make contact through http://www.billyprestondoc.com.

Preston wouldn’t be my first choice for the “next” rock bio, but he’s definitely a pivotal player in the music game … he always was.

SHORT TAKES — Mark Bego, who did a terrific book on Elton John (Rocketman in 2009), says this about John’s new The Lockdown Sessions collection: Elton John’s “The Lockdown Sessions” is by far his most interesting, engaging, and cutting edge album since his collaboration with the late Leon Russell, a decade ago …

Here’s a quick quote from TCM’s Donald Liebson on The Monkees show last Friday in Chicago: How did it go? Well, let’s see: A full house, a great band, classic songs…you do the math! It truly was a wonderful show. I’m still trying to figure out why I welled up during “Pleasant Valley Sunday,” but beyond that, Micky and “Nez” were in fine voice and in high spirits. Hard to beat a rapturous standing ovation before even one note was played. My disappointment that they did not perform “Gonna Buy Me a Dog” (not that I really expected they would) was more than compensated for by “Me & Magdelena,” which I had never heard. When we got home, we checked out “Good Times” on Spotify and were blown away. Better five years late than never, I always say. Brilliant for sure. Their tour wraps-up November 14 at the Greek Theatre in LA …

Been listening to Bob Dylan’s Blood On The Tracks (1975) and can’t believe how good it still sounds. It was glorious when it first came out-I remember, but still sounds as relevant and moving today. No question, Dylan was at a creative peak with this album. Just stellar … SIGHTING: PR-pasha David Salidor at the Ace Hotel’s restaurant in Boerum Hill, Brooklyn … Happy BDay Evan Levy.