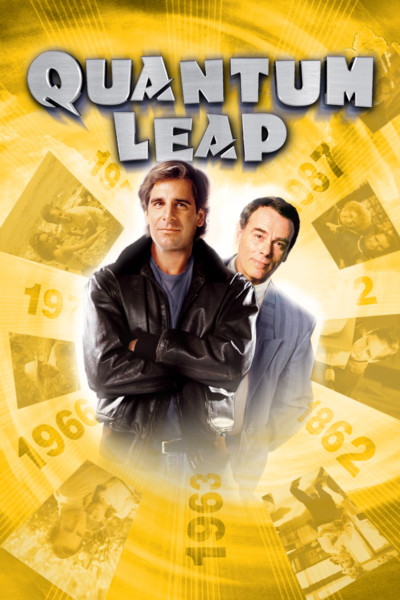 LEAP AGAIN — (Via Deadline) Quantum Leap’s long-rumored return has taken a big leap toward becoming a reality. NBC has given a pilot order to a reboot of the beloved 1990’s sci-fi series, which starred Scott Bakula and Dean Stockwell.

It’s been 30 years since Dr. Sam Beckett (Bakula) stepped into the Quantum Leap accelerator and vanished. Now a new team has been assembled to restart the project in the hopes of understanding the mysteries behind the machine and the man who created it.

Bakula is not attached to reprise his role or produce the new Quantum Leap but is aware of the reboot and has had conversations about potentially getting involved. Bakula’s co-lead on the original series, Dean Stockwell, died in November at age 85.

The original NBC series, which aired 97 episodes from 1989-93, featured Bakula’s physicist and inadvertent Sam Beckett time-hop through various eras by “leaping” into the bodies of other people. Stockwell played Beckett’s sidekick, Admiral Al Calavicci, who appeared as a hologram to guide him through the weekly adventures.

This particular iteration had been kept largely under wraps but Bakula last fall told the late Bob Saget on his podcast that there were “very significant conversations” about a Quantum Leap reboot.

“The rights were a mess for years. I don’t know if they’re even sorted out now. That’s always been the biggest complication,” he said back then. Bakula added that he had spoken occasionally to series creator Bellisario over the years about a potential comeback, “and he would always say, ‘I can’t write it without thinking of you and Dean.’”

Now, I’m a sci-fi fan through and through, yet somehow I missed this show. I was aware of it from Bakula, but still missed it. I loved Gero’s Blindspot and will definitely give this iteration a serious look. I know the show has had an amazing and loyal following, so good news for sure.

Speaking of sci-fi, Kudos to CBS’ NCIS for working in the original Star Trek-theme by Alexander Courage in last week’s episode (All Hands). It was an odd add to say the least, but very, very cool. writer Christopher Waild must be a Trekker.

FLEET FOXES — (Via Deadline) Fox is going its own way with Mick Fleetwood.

The network is looking to the Fleetwood Mac co-founder to drum up its next drama series after putting 13 Songs into development from the musician, whose band was responsible for mega-records like Rumours.

The scripted project is written by Will Reiser, who wrote the Joseph Gordon-Levitt-fronted comedy feature 50/50, and Jonathan Prince, the American Soul creator who also exec produced Hulu’s adaptation of Four Weddings and a Funeral.

It will be directed by Jonathan Levine, who directed all eight episodes of Hulu’s Nine Perfect Strangers.

Fleetwood will lend his creative and musical voice to 13 Songs, which follows rock legend Jasper Jones and his band, The Grift, who once made music that spoke to a generation of Americans, but not anymore. Decades later, after being diagnosed with terminal cancer, Jasper is given only a few months to live. As a final love letter to his fans, he reconnects with his band to write and record 13 final songs and leave his mark on the world forever.

The project comes from Lionsgate and Polygram Entertainment, which have a relationship, and previously had a first-look TV deal, that recently spawned the Frank Sinatra biographical drama series at Netflix. The two companies will produce with Fox Entertainment, Thruline Entertainment, and Megamix.

It is the latest musical drama series set up at Fox. The network has Monarch, about a country music family dynasty for the fall as well as Icon, an anthology drama series profiling some of the world’s biggest music legends, starting with country music duo Naomi and Wynonna Judd, in the works with The Morning Show EP Adam Milch.

SHORT TAKES —Working in the entertainment sector for decades, MIDEM was the one industry festival, in France, that one  just had to attend. Small companies, big companies, this was the one industry-wide event you wanted to be at. Records labels would provide somewhat lavish-events and bring their key-artists to be seen by the industry. It had unbridled cachet. Shuttered by Covid, the organizers suddenly announced in late-December that after 55 years it would end: Here’s the official announcement: https://completemusicupdate.com/article/midem-axed-after-55-years/… All things must end it would seem.

We spoke to PR-man David Salidor who in 1984 helped organize the infamous New Music Seminar with Tom Silverman, Danny Heaps, Scott Anderson and the late Mark Josephson, that essentially replaced the Billboard Disco Forum: “We began the Seminar because the existing ones didn’t really evolve with the times. It was a hit for 15 years, then stopped. Tom tried to bring it back twice, but it just didn’t work. MIDEMwas the standard-bearer for all these industry events. With it’s cancellation, I believe we’ll see many other industry events gone forever. I guess the motto is indeed All things Must Pass” … Daniel Radclifffe to play Weird Al Yankovic? Now, that’s something I wouldn’t have predicted … Terrific three-part series in Clive Young’s Pro Sound

News on the recording of David Bowie’s Toy with Mark Platti – which has finally been released. Check it out here: https://www.mixonline.com/recording/toy-recording-david-bowie-lost-album-leak-restoration?fbclid=IwAR0c288o4nHjWP9Etq-2096YPLeZLwTB9B4roXT5svBW43iryvydVyc73A0 … I’ve spent some serious time in the last three weeks looking for a new laptop and inadvertently bothered more people than I probably should have. I hadn’t shopped, let alone buy, a new one for several years and have been totally overwhelmed by the choices. I’’d been using a Dell XPS and finally decided on another Dell. I’m done now for sure; but what an ordeal … Netflix’s brilliant Ozark returns this Friday with Part 1 of their final season. Season Three was pretty awesome especially with its amped up finale; which saw their friend (?) Helen blown away ..

literally. I’m a big Jason Bateman fan and he definitely found his niche here along with a stellar Laura Linney and Julie Garner as Ruth. Bateman directed several episodes and they were just terrific. Here’s the trailer for Part 1 … just amazing:

These home Covid-test kits that will be mailed by the Government are great, but several pundits add that they won’t even be delivered till late-February, when the Omicron surge may be dissipating. FUBAR for sure … And, just announced the Grammy’s will be moved to April 3 at the MGM Grand in Las Vegas.