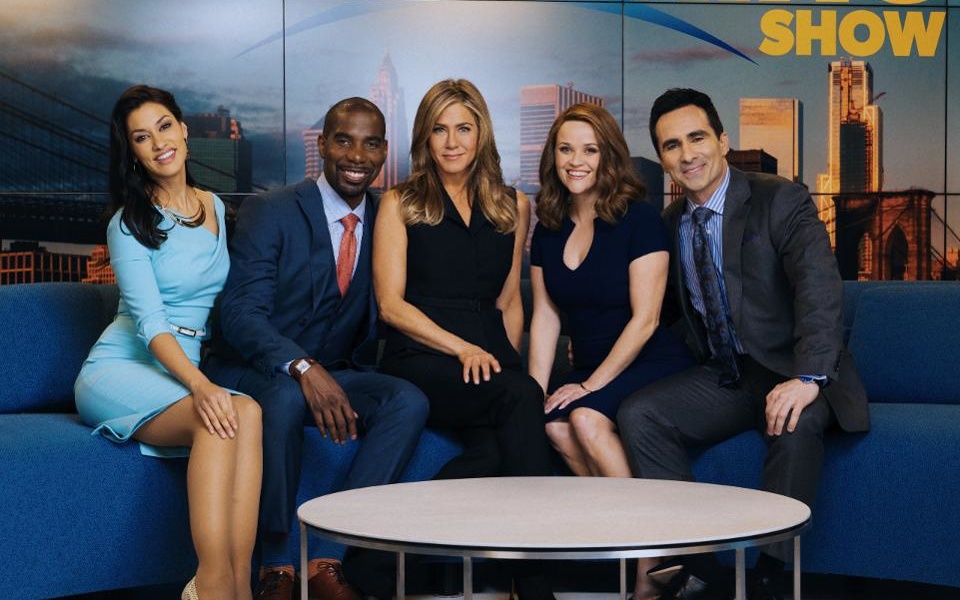 FIRE DOWN BELOW — Apple TV’s The Morning Show is without a doubt one of the best things I’ve ever seen on TV (cable, streaming and network). And, maybe it’s because I finally watched someone that related directly to my line-of-work. Hitting home as it were … and, a bulls-eye no less!

It’s essentially all true, although Katie Couric said recently that she wished the Jennifer Aniston character was somewhat warmer. I love Katie, but she knows that Aniston’s performance was pretty much right on track. Of course, Couric did end the quote by saying she was saving it all for her book due out soon. I have to add that all of the characters were amazingly well fleshed out and pretty much on point; and, I’ll stake my career on that.

As I said before that Billy Crudup’s performance was a career making one and I still stand by that. He’s just astonishingly good.

The finale, which I had been told was off the charts, was all that … and, more. Somehow they managed to wrap up at least four major plot lines together; including the death of a character; and, the two anchor gals, Aniston and Witherspoon finally coming together in a remarkable performance of solidarity and leaving the network with nothing else to do, than go blank.

It’s stirring, provocative and simply compelling TV. Honestly, I can’t think of another TV-finale that succeeded so successfully. That said, the performances by Aniston and Witherspoon are exceptional. It’s the best work ever, by both. Exceptional.

Kerry Ehrin, the showrunner (she’s been involved with The Wonder Years and Friday Night Lights) just did an exemplary job. I have already predicted (in my mind) how Season Two will begin; I’m probably wrong, but I predict that everything is back in place … the way it was in Season One. EP Chip is back in play; the show is still #1 in the AM race; Crudup is the boss and things go smoothly … until fired-anchor Mitch Kessler (Steve Carell) comes back into the mix.

Don’t forget his Barbara Walters-I’m sorry interview, where he was to confess, never happened.

Well, I’m probably wrong, but The Morning Show was a ratings hit in my book … and, as in morning TV, that’s all that matters.

NEW NICKS — Stevie Nicks is hoping to use her period of self-quarantine to work on a potential multimedia project built around her Fleetwood Mac hit “Rhiannon.”

As Nicks told Rolling Stone, she had already scheduled 2020 to be her first year in more than a decade without a tour, either as a solo artist or with Fleetwood Mac. Her intention, as she informed the band, was to start on a “book/movie” inspired by the myth of the Welsh witch mentioned in the 1975 song.

I have some Rhiannon poetry that I have written over the last 30 years that I’ve kept very quiet,” Nicks explained. “I’m thinking, ‘Well, here I have all this time and I have a recording setup.’ And I’m thinking I’m going to start doing some recording. I’m going to start putting some of these really beautiful poems to music, and I have the ability to record them. So that’s on my to-do list.”

Nicks noted that “what all we have right now, if you’re home in quarantine, is time, unless you’re taking care of kids. So, really, you could do anything you wanted that you’ve been wanting to do your whole life. So that’s how I’m trying to look at it.”

But the singer hasn’t started the projected yet. She’s been suffering from a case of Epstein-Barr virus since January, which has left her really tired. Nicks said she’s unable to get to sleep until six or seven in the morning; one of the three friends she’s self-quarantining with wakes her up around 2PM, and she then spends much of the day watching the news.

It’s not helping, she added, that she’s so used to bouncing from one tour into rehearsals for the next one that she hasn’t fully adjusted to the downtime. “This is the year I was going to take off,” she noted. “I was going to talk to everybody about making my movie and do some recording and meet new people. And, well, you’re not going to meet any new people. Because you can’t leave your house. So you have your dog and your three friends.”

TCA PASADENA GOES DOWN — The Television Critics Association’s summer press tour — at which the broadcast-TV networks, cablers and some streamers showcase for critics and journalists their new and returning shows and stars — has been cancelled for 2020.

This summer’s tour was to be held in Pasadena, Calif., running late July through the middle of August. California Governor Gavin Newsom recently said that gatherings of hundreds or more will likely be banned at least through summer, as the state waits to plot out its recovery from the coronavirus pandemic.

The TCA board said in a statement that while is “working with the networks to explore virtual alternatives both within the original press tour time frame and later in 2020… given the current state of television production, as of now, this is a cancellation not a postponement.”

Earlier this spring, the broadcast-TV networks announced that they will forego their in-person and star-studdedUpfront events, held in mid-May and at which they unveil their schedules for next season, and instead hold streamed presentations for advertisers and the press.

TCA holds two tours annually: one in the summer, which is primarily to preview fall premieres, and a second one in the winter, for midseason fare. (This year’s winter tour was held in January.) On any given day during a press tour, TV outlets take turns presenting the casts and producers for new shows and the occasional returning favorite, to answer questions from the TCA body. Additionally, network presidents and other executives will sometimes make themselves available for a press conference on their assigned day.

The plan for the organization’s annual Television Critics Association Awards, which are typically held midway through the summer press tour, will be announced at a later date. The big winner in 2019 was Fleabag Season 2, which was honored for Program of the Year, Best Comedy and Individual Achievement in Comedy (for Phoebe Waller-Bridge).

Interesting observation by Blood Bloods’ Donnie Walhberg: “How can any of the shows ignore this pandemic? It’s not possible.” Certainly not for Blue Bloods’ traditional end-of-show dinner. Think about it!

Speaking of Apple’s The Morning Show-they used Nilsson’s “Jump Into The Fire” in a episode. What a great song. Bravo … I read an interesting article that posited the only way live-concerts can begin again … is in a drive-in movie situational. Is that even possible? How will the performer protect themselves? Stay tuned … And, if there’s one thing I’ve witnessed during this stay-at-home era, it’s how much filler in on Netflix. Fauda? Bad dubbing and the same old plot. I realize that we need content right now more than ever, but there’s got to be something better?

How about Joana Bonaro’s Good ‘n Screwed. Whatever happened to that? With Soprano-Robert Funaro! Whimsical, funny, charming … it would have been perfect!