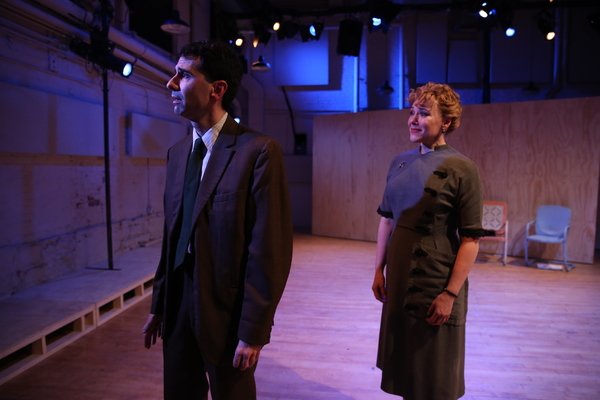 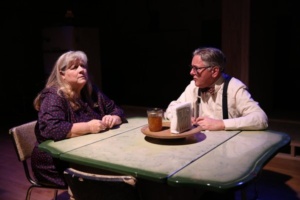 The Transport Group is performing in rep William Inge’s first play Come Back, Little Sheba and his Pulitzer Prize-winning Picnic. The Gym at the Judson does a remarkable job at changing demographics from inside the house to outside the house, thanks to the sparse scenic design by Dane Laffrey. Alcohol abuse, loneliness, lust, youth, lost dreams and desires run rampant in both plays. 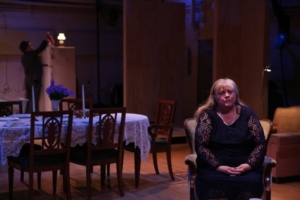 Come Back, Little Sheba is based on the real life memories Inge had, when at 47 he joined Alcoholics Anonymous and a woman he met, named Lola etched her way into his psyche. Shirley Booth and Sidney Blackmer were the original stars and took home Tony Awards for the 1950 production. Booth went on to star in the 1953 film opposite Burt Lancaster, for which she won the Golden Globe and the Oscar. 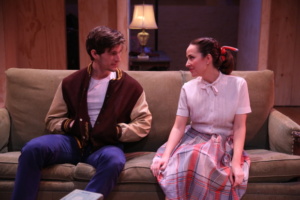 At the heart of the play is Lola Delaney (Heather Mac Rae), who married young after becoming pregnant. She lost the baby and her chances to have another. Her husband Doc (Joseph Kolinski) was a promising medical student, but alcoholism has killed his dreams. Lola longs for the past and her longing is wrapped up in Sheba, a puppy who ran away. Lola lives vicariously through the couple’s boarder Marie (Hannah Elless), an art student who is fooling around with a athletic hunk named Turk (David T Patterson). Doc, who has been sober for a year, covets Marie and is jealous of Turk. Marie has another boyfriend Bruce (Rowan Vickers) back in Cincinnati. When Doc catches Marie sleeping with Turk he goes off the wagon.

Mac Rae, is perfect as the depressed housewife, who longs for more. We see a truthfulness in her performance.  Joseph Kolinski, nails the desperation and longing that sinks him into oblivion. John Cariani is highly amusing as the two mailman and milkman. 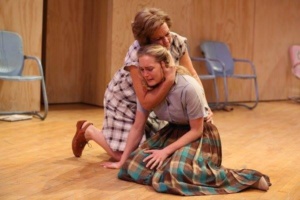 In Picnic, it all begins with a shirtless, drifter named Hal Carter (David T Patterson) who is given some work by a Mrs. Potts (Heather Mac Rae) in exchange for some breakfast. When he leaves nobody is left the same, especially the prettiest girl in town, Madge Owens (Ginna Le Vine), the girlfriend of Hal’s old frat buddy Alan Seymour (Rowan Vickers). Madge’s single mom (Michele Pawk), wants her daughter to have a better life than she did,  while her sister 16-year-old aspiring novelist Millie (Hannah Elless) longs to be as pretty as her sister and attract boys. Both sisters long to escape this small Kanas town. It is the day of the Labor Day picnic, when tempers will flare, truths are revealed and lives changed.

The saddest part of the story is that of the spinster-schoolmarm boarder Rosemary (done to perfection by Emily Skinner) panicked by the start of another school year, begging her boyfriend Howard (a understated John Cariani) to marry her. It is completely heartbreaking and pathetic all in the same breath as Rosemary fights for her life.

Patterson, does better in this show adding a tenderness to Hal and a sympathy. As does Hannah Elless, who makes Mille highly watchable.

Jack Cummings lll’s direction allows Inge’s words to speak for themselves and that is the magic of the Transport Group. He brings these worlds up close and personal.

Picnic won a Pulitzer back in the day, but now these character and time seem so far out of touch with today’s mentality. They do however give us a realistic glimpse into our past, as painful as that is.

Come Back, Little Sheba and Picnic: The Transport Group at The Gym at the Judson, 243 Thompson St, until April 16th.