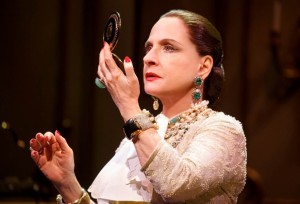 When it comes to high voltage star power, you would be hard pressed to find a show with higher wattage, currently playing in the Windy City, than War Paint. This World Premiere musical features two, two-time Tony Award-winners, Patti LuPone and Christine Ebersole. Each woman bringing their illustrious theatrical pedigrees onboard to portray a couple of pioneering and competitive titans of the beauty industry.  LuPone appears as Helena Rubinstein and Ebersole giving life to Elizabeth Arden. Each had a similar rags-to-riches backstory, as they quickly climbed the ladder of success, to become cosmetic giants in one of the most lucrative industries of the 2Oth century.  Ambitious, ruthless, and each immensely likeable, these bitter rivals and lifelong enemies achieved unparalleled success and untold wealth professionally, if not personally. The intimate details of their lives would be unbelievably laughable if they were not based on the truth. The creative team behind Ebersole’s Grey Gardens, playwright Doug Wright, composer Scott Frankel and lyricist Michael Korie, reunite to explore another real life duo of over-the-top damsels who cause more distress then they need rescuing from. War Paint isn’t perfect, but I found this high gloss bio-musical quite enchanting. 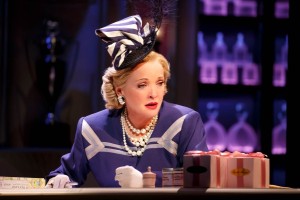 We begin this tale with the shows’ two leading ladies, sitting at their respective Vanity tables, preparing for the day. “A Woman’s Face” is an engaging and comedic start, featuring two women at the top of their respective games. There are “No ugly women, only lazy ones” purrs LuPone’s Rubinstein in a heavy (if not fleeting) Eastern European accent. For two innovative American success stories, both of these women have origins that stretch well beyond American borders. Elizabeth Arden was actually born Florence Nightingale Graham in Ontario, Canada. After working for others for a few years, she rechristening herself with the moniker “Elizabeth Arden” and quickly crafted her signature pink swathed brand, and red-door spas, coveted by all the well to do women of Manhattan’s Fifth Avenue. In stark contrast, Helena Rubinstein turned her Polish Jewish pedigree into becoming the “Marie Curie of mascara,” as the script claims. Rubinstein’s approach was more scientist, establishing her brand first in Europe, always surrounding herself with a lifetime addiction to the finer things, jewels, art and antiquities. The two men in their lives, Tommy Lewis (John Dossett) was Arden’s husband at home and chief marketing manager at work. She would not allow him the title of Vice President in the office, else her “brand” would be tainted by male interference. She felt he would be credited for all of her success. She was an aspirational woman, after all, who believed her own hype, sadly, a little too much. On the other hand, Harry Fleming (Douglas Sills) was Madame Rubinstein’s right hand man and constant companion in public, while in private, he was gay. A scandal for those times, a prerequisite today. I would say Rubinstein was Fleming’s “beard” but she would be aghast by such a description for a woman who made her fortune through beauty.  These dueling divas of drama end up, quite literally, trading leading men, as each gentleman switches allegiances and competitive trade secrets with the other side. 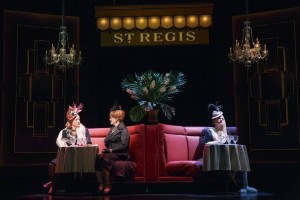 The remainder of the show follows the mostly ups and a few downs of each woman’s professional lives. They may have began by offering “hope in a Jar” and the secrets to the fountain of youth through cold creams and mascaras, however, their collective hunger for success linked them forever as “sisters in suffering.” When they are both called to appear in front of the Halls of Congress for claims of deceptive advertising and questionable ingredients (lead in cosmetics, really?) the ladies barely have time to break a sweat before they emerge unscathed. The song “If I’d Been a Man” is a triumphant ballad which lays firm on the age old double standard of domineering men being respected in business while successful women are just scorned. Rubinstein, both a female of wealth and a Jew in New York during World War ll, was refused a posh Upper East Side apartment by the voting Board. Her retaliation, buying the building out from under them. Speaking of World War ll, with some cunning product rebranding, this dynamic duo was rolling in dough from lipsticks to lotions in a time remembered mostly for nationwide rationing. Rosie the Riveter was never appeared more ravishing. Alas, their shared elitism became their Empire’s unwitting downfall. When each were separately approached about advertising on the new medium known as television, both women scoffed at that “fad.” Each claiming their brand was far too prestigious to appear as a sponsor of a  quiz show or in a car commercial. A little upstart named Revlon swooped in and the rest is drug store cosmetics history. The impressive “Fire and Ice” production number, with its sultry choreography by Christopher Gattelli, mesmerized. By the show’s end, each cosmetic giant had outlasted their brand’s usefulness. They were just “two dinosaurs who stuck around……..Epidermis Rex.” 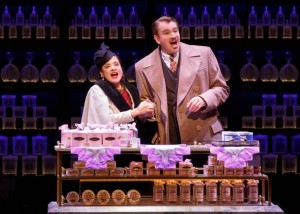 Catherine Zubar’s sumptuous costuming will astound. Glorious hats, custom tailored suits, and the extraordinarily glamourous gowns decorate each leading lady with precision. David Brian Brown’s hair design for the entire troupe was spot-on, period perfect, although LuPone’s look was reticent of a brunette Evita and Ebersole’s replicated Pat Nixon. David Korins regal set design will daze. Kenneth Posner lighting, swathing the stage with lush pinks, then patriotic red, white and blues, simply captivated.  Strong musical direction by Lawrence Yurman helped guide each woman to soaring vocal heights. Ebersole’s  “Pink” and LuPone’s “Forever Beautiful” were both Act two treasures that packed the most emotional resonance of the entire show. Before this production transfers to New York, I hope a little more depth can be added much earlier in the script to both woman’s characters. Believe me, the surface charms on display throughout War Paint is significant, but let’s give these appealing, elegantly adorned characters a little more pathos and true substance. They are certainly up to the task. By the show’s ending, when each woman, standing side by side, asks one other rhetorically if their life’s work helped to make women “freer or help enslave them?” I couldn’t help but contemplate, where was this substance an hour ago?  I know this is a show about superficial cosmetics, but it wouldn’t hurt to dig a litter deeper, beyond the alluring surface level, to successfully tell this tale. 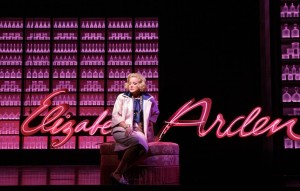 The Goodman Theatre’s War Paint is now playing through August 21. 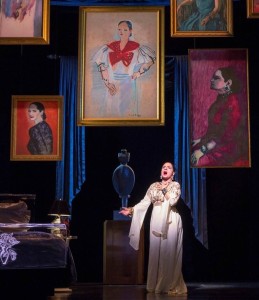 Suzanna BowlingJune 5, 2022
Read More
Scroll for more
Tap
NYMF’s Quirky A Scythe of Time Is A Winner
Culture Club – The Boy Is Back