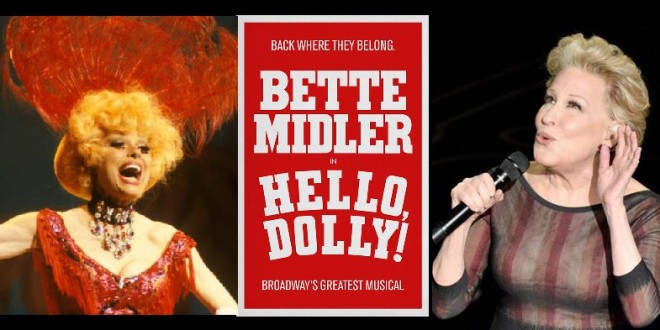 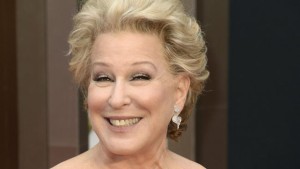 I hear the band playing as movie and theatrical producer Scott Rudin announced that the Divine Ms. M will star in a Broadway revival of Hello, Dolly.”There has not been a new production in 50 years, partly it was the difficulty of who could play Dolly. It had to be someone who could take it to a different level. Bette is the only one who can. Never has there been something more inevitable than her in this role, states Mr. Rudin.

The revival will be directed by four-time Tony Award winner Jerry Zaks, the choreography will be by Tony-winner Warren Carlyle. The creators say the new work will pay tribute to Gower Champion, the show’s original director and choreographer. Performances on Broadway begin on March 13, 2017, with an official opening night of April 20, 2017. Rehearsals begin one year from Tuesday.

Midler and Rudin were in conversations about the role for a year. The actress and singer threw herself into researching it, reading and watching all she could, Rudin said. He added that both wanted to explore Dolly’s warmth, desperation and humanity.

Midler steps into the role previously performed by Pearl Bailey, Phillis Diller, Betty Grable, Ethel Merman, Martha Raye, Ginger Rogers and, of course, Carol Channing, who originated it on Broadway in 1964 — it ran for seven years and became the longest playing Broadway musical at the time — and who came back in revivals in 1995-96 and 1978. Barbra Streisand also played Dolly on screen in a 1969 film version directed by Gene Kelly.

Midler made her Broadway debut as Tzeitel in the original production of Fiddler on the Roof, earned a special Tony Award in 1974 for Bette! Divine Madness and produced  the musical Priscilla Queen of the Desert. In 2013 Midler returned to Broadway in the one-woman show I’ll Eat You Last: A Chat With Sue Mengers. Though a huge box office hit (it recouped its $2.4 million investment in just over eight week) there was no love for the star.

Rudin, who has been a fan of Midler’s for years and produced her film The First Wives Club, said she is the perfect choice — an electric singer, a powerful actress and a savvy stage veteran.