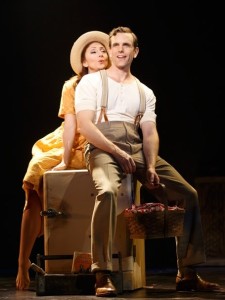 People will go to see Bright Star because Steve Martin and Edie Brickell, who won a Grammy in 2013 for best American roots song, penned it. Book, music and lyrics’ were done by these two legends, unfortunately they do not understand musical theatre or how to keep a show from being predictable 15 minutes after the show begins. I knew the whole plot line and there were still two hours to go, with no twists or turns or anything unexpected. The show is set up for failure from the first number, “If You knew My Story.” Not only are the lyrics trite, but awkward in their phrasing and a downer. “If you knew my story you’d have a good story to tell,” well the fact is we all do and this one wasn’t so good. What saves this show is the winning performance by Carmen Cusack who is the shows radiant star.

The plot is thin at best; not surprising considering it’s built around an incident in 1902 where a baby was thrown from a train. 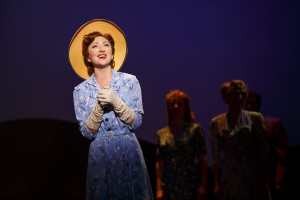 It is 1940 and we meet G.I. Billy Cane (A.J. Shively) who has just returned from World War II. He aspires to be a writer, so he leaves the backwoods and Margo (Hannah Elless), the girl who loves him to meet the stern Alice Murphy (Cusack) the editor of the top literary magazine called the Asheville Southern Journal in the big city. Alice turns down and publishes the likes of F. Scott Fitzgerald, Tennessee Williams and Ernest Hemingway. She takes a shine to Billy and gives him $10 to encourage him and wants to see his next stories.

Flash back to 1923, where a 16-year-old bright and sassy Alice is falling for the Mayor’s son Jimmy Ray Dobbs (Paul Alexander Nolan) and he for her. Ray’s father, Josiah Dobbs (Michael Mulheren) wants his son to marry up and Alice’s father Daddy Murphy (Stephen Lee Anderson) is puritanical and wants her to stay chaste. When Alice ends up pregnant and gives birth her father’s signs away her rights without Jimmy Ray’s consent thinking the Mayor is putting the child up for adoption. Instead the Mayor throws the baby from the train. Alice has spent all of her life searching for her child. Needless to say this story ties up neatly in a nice manipulated package.

The show comes alive when Mr. Nolan sings the song “Whoa Mama.” He breathes an energy into this two dimensional character as does supporting actors Emily Padgett and Jeff Blumenkrantz in “Another Round.”

The score is mostly bluegrass with tinges of gospel and a smidgen of swing thrown in. The tunes all sound the same, much like The Last Ship. On their own the tunes are lovely, if not a little simplistic, but ballad after ballad leaves you craving the up-tempo’s which are far and few between. There is also so much music that it would have made sense to turn this into a country operetta, at least that would have been unique. Another problem is that what the songs are saying and what is happening on stage are in conflict. The music with the help of musical director Rob Berman sounds great but the lyrics are generic and so simplistic.

Bright Star is staged by Walter Bobbie and choreographed by Josh Rhodes, whose thigh-slappin balletic movements do not help this troubled script and score. The vocal arrangements however, are angelic. Eugene Lee’s rustic set is looking in need of some funding, but the lighting by Japhy Weideman helps to set the mood.

Keep shining for me,

Shine on and see me through.

Keep shining for me,

And one day I’ll shine for you.

My guess is the lights will be dimming quite soon for this star, who is misplaced on the heavens of Broadway.