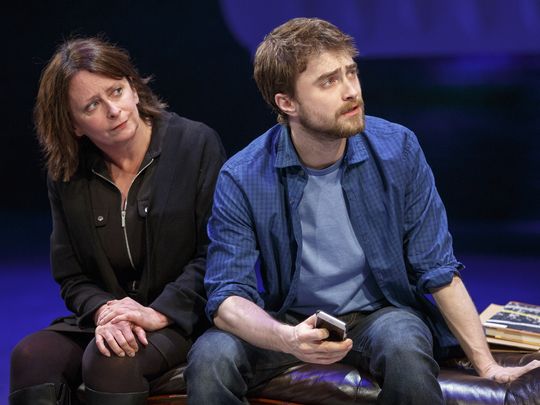 Daniel Radcliffe and Privacy Show Us There Is None

Daniel Radcliffe and Privacy Show Us There Is None 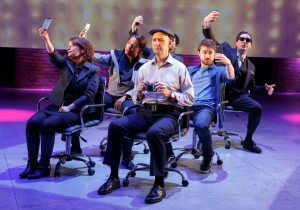 All I can say after seeing the co-creation of James Graham and Josie Rourke’s new drama Privacy at the Public Theatre, is thank-you Cammy for teaching me how to keep my phone under the radar. Last night I learned, what you taught me was oh so valuable, for as others phones were hacked into and sent an e-mail, mine was not. 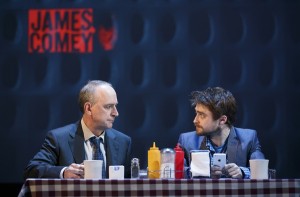 Privacy is a documentary style of theater that concerns many issues, such as the difference between privacy and secrecy, intimacy and how the American public has lost it’s rights, while being completely oblivious. Premiring at the Donmar Warehouse in London in 2014, this show is interactive, chilling and disturbing, unless you have been aware about this problem for awhile. Governments, corporations and political spying happens every second of every day. This show shows you how.

I have never been one to give out my zip code when a store asks me for it, let alone my address. I am super careful when it comes to my information and even that has not always kept me safe. No matter how digitally savvy you are, there is no such thing as privacy and that is unnerving.

In Privacy we follow the writer (Daniel Radcliffe) who having broken up with his boyfriend for being “emotionally unreachable,” seeks a therapist (Reg Rogers). He is asked to take a  journey of self-discovery and in doing so, the audience is asked to participate. The writer is asked to add his digital fingerprint to the universe and then we are shown how that has opened ourselves up to be spied on, hacked and to be laid vulnerable to whoever wants to use us for their own gain. Even the audience is manipulated into participating and then asked to take selfies and post them to the Public Theater website. Those who agreed become a part of the show and are shown more than they bargained for. By the end you will be questioning your relationships with the phone, the internet and the camera’s that are peeping in at any given moment.

Along the way  De’Adre Aziza, Raffi Barsoumian, Michael Countryman, Rachel Dratch and Mr Rogers play and assortment of people like Randi Zuckerberg, M.I.T. professor Sherry Turtle, Ewen MacAskill, New York Law School’s Ari Ezra Waldman, The FBI and even Edward Snowden chimes in. It was wonderful to see the always layered Michael Countryman on stage. The cast is a true talented ensemble with Daniel Radcliffe showing us more and more of what is certain to be a long-lasting career.

Do we have free will any more? With Wiki Leaks latest e-mails and the crimes committed against Bernie Sanders, just who is safe from the prying eyes of those in charge? Its a shame Privacy doesn’t supply the answers because that is the real story.

Lawrence HarbisonNovember 20, 2021
Read More
Scroll for more
Tap
The Stars Come Out To Film, Promote and Hang Out
Between Riverside and Crazy – Drama Torn From The Headlines