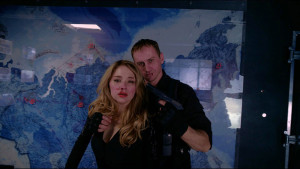 Thanks to the likes of The Blair Witch Project, Cloverfield, and i, first-person films have found there way into mainstream, while making their audience a little nauseous. All of those films typically relied on presenting the story with a mix of live and found footage. In Hardcore Henry, writer-director Ilya Naishuller uses this technique weaving this adrenaline-fueled, insane 90 minute feature, that plays out like a live-action, first-person, shooter film.

Hardcore Henry takes you on a first-person action ride where you, the audience, has been brought back to life by scientist wife Estelle (Haley Bennett) as a cybernetic infused super soldier. After you wake up, Estelle is kidnapped by a telekinetic villain Akan (Danila Kozlovsky). So you set out on a mission, with the help off Jimmy (Sharlto Copley), a mysterious ally who, keeps dying and respawning as different versions of himself, just as if this were a true video game. That is the crux of it, straight and to the point. Hardcore Henry is not about the story, but rather the bullet-filled journey you take to get to the final boss.

Those expecting a riveting story here will be disappointed. Why is everyone trying to kill Henry? Why does the villain have telekinetic powers? While most audiences will question these plot holes, the first-person perspective lets the action drive the film. Just like a video game where each level comes with scenery and an objective change, Hardcore Henry is able to use its lose plot to take the audience on a bloody rollercoaster of an experience all leading up to a final boss encounter, before dealing with waves of goons.

Due to this perspective, director Ilya Naishuller set up some of the most elaborate stunts on screen. The film is suppose to take place, non-stop through one man’s eyes. Naishuller does not have the ability to constantly use cuts to break up the action. Hardcore Henry plays out like several long takes with small moments of glitches when Henry’s cybernetic systems malfunction. With a GoPro feel to it, strategic cuts and musical cues help give this film its cinematic flair. Though be warned; the camera can be shaky, which can make audience members dizzy at times. Sitting toward the back of the theater should help with this.

Hardcore Henry lays out the blueprints for how video games like Call of Duty and Battlefield can make their jump to the big screen. While it isn’t likely that Call of Duty would use the first-person technique to tell its story when it’s finally adapted for the big screen, it would be a shame if the filmmakers do not use Henry as a reference. Sure to please the biggest action junkies with its absurd and ultra violent action and video games references, Hardcore Henry is one hell of ride.

G. H. HARDINGJanuary 18, 2023
Read More
Scroll for more
Tap
The Force Awakened With the Magical New York Pops
Meryl Streep and Hamilton at The Women in the World Summit