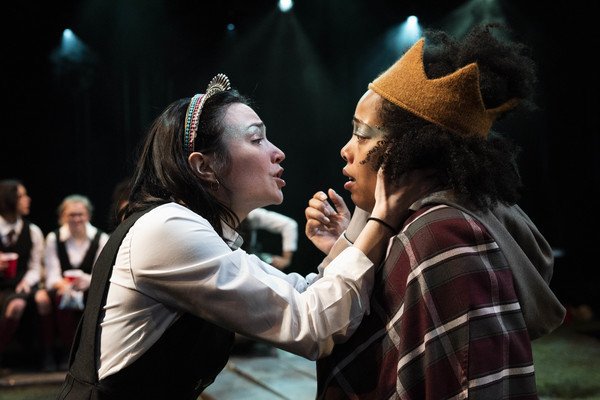 Hunter Theater Project’s return engagement of the critically acclaimed Red Bull Theater production of Mac Beth is electrifying. After seeing Classic Stage Company’s production, this was a breath of fresh air running just 90 minutes with no intermission. The show which originally premiered in 2018 at Seattle Repertory Theatre and then the Lucille Lortel Theatre is fraught with murder, as school girls transform into witches, ghosts and kings. Blood, prophecies, smartphones and the world of today, blend with Shakespearian text.

Adapted and directed by Erica Schmidt, it is hard not to think of the two 12-year-old girls who stabbed their best friend 19 times due to their obsession with the Slender Man. The witches (Sharlene Cruz, Dylan Gelula, Sophie Kelly-Hedrick), start things off with a ritual where Macbeth (Brittany Bradford) and Banquo (Ayana Workman) are conjured up and prophecies are told. When Lady Macbeth (the wonderful Ismenia Mendes) darkly ambitious carnal desires explode, we see the tragedy begin to unfold as Macduff’s (Camila Camió-Flavá) death brings about madness and carnage.

The witches here engineer the proceedings, as teenage volatility says off with a head. These girls are beyond creepy, as their dark powers lead to dancing, flinging themselves about a taking selfies as if none of this matters.

The cauldron scene is a little too graphic for my taste, as bloody baggies give way to used tampons, as rain cascades and murder isn’t just done one way but several.

This cast is really excellent, especially Ismenia Mendes and Sophie Kelly-Hedrick whose quirky voice is mesmerizing.

The set design by Catherine Cornell is fantastical and goth. The costume design by Jessica Pabst, seem more like the girl version of Harry Potter and Hogwarts. The lighting design by Jeff Croiter, is haunting, as is the eclectic sound design by Erin Bednarz. I am surprised this cast isn’t bruised to the bone, but obviously Lorenzo Pisoni’s movement is done to the letter.

I found this production fresh, new, scary and oh so watchable. I can understand why it has been extended again and again. Catch this thrilling new version before time runs out.

Suzanna BowlingJanuary 24, 2023
Read More
Scroll for more
Tap
“Grand Horizons” – A Look at the Difficulty in Communication
Hear The Songs From Mrs Doubtfire and More From BroadwayCon