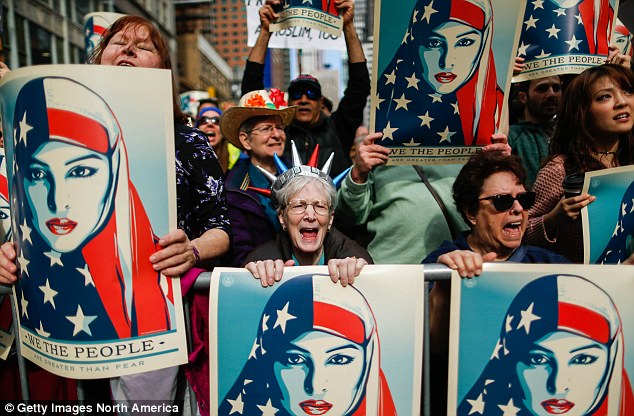 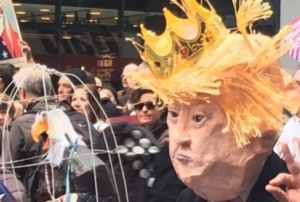 George Soros lost money today. About 1,000 protesters descended onto Times Square claiming “Today, I Am A Muslim Too,” which was much less than the 10,000 expected. Many held posters of a Muslim woman draped in a head scarf depicting the American flag.  Mr. Soros has been funding most of the protests in America and one has to wonder why? What are his interests? These posters came out for the Women’s march and were funded by those who want Sharia law in place. For those who don’t know Sharia law condemns women and cocoons them, gays, transexuals, Jews and basically anyone who is not Muslim.

“Today, I Am A Muslim Too” took over Times Square, at about noon with a huge American flag serving as the rally’s backdrop and a paper cache effigy of President Trump.

“We have to acknowledge that there is a change in our country … there is a shift toward more hate crimes and more hate. We are here unified because of Donald Trump,” stated hip-hop performer and rally co-host Russell Simmons. 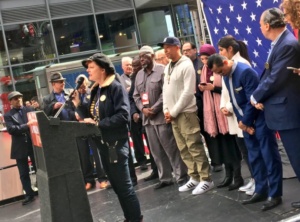 Susan Sarandon, Judy Gold and Mayor Bill de Blasio arrived shortly after 3 p.m., stating “Regardless of your background, your faith or where you were born, this is your city. Think about the origins of this country founded to respect all faiths and beliefs.”

Gov. Andrew M. Cuomo was but was “in support of the march for equality and tolerance in Times Square today. We are one New York.”

Linda Sarsour, director of the Arab American Association of New York, spoke out saying “Not on our watch, not on my watch, not on your watch. I am not afraid because fear is a choice, it’s not a fact.”

Rabbi Marc Schneier, president of the Foundation for Ethnic Understanding, which helped organize the rally, spoke clearly “Jews fleeing Nazi Germany faced barriers similar to those Muslims face today. Thousands of Jews who wanted to come to these blessed shores were shut out. Never again. The Muslim community is our greatest ally in fighting terrorism and extreme fundamentalism.”

Imam Shamsi Ali of the Jamaica Muslim Center stated “Any harm to Muslims is harm to all Americans. This president is an obstacle for Muslims to integrate into America.” 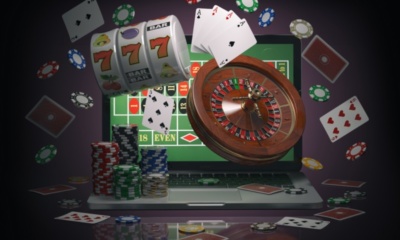 Suzanna BowlingJuly 25, 2022
Read More
Scroll for more
Tap
Not My President’s Day Has Rally’s All Weekend
Fire In Times Square