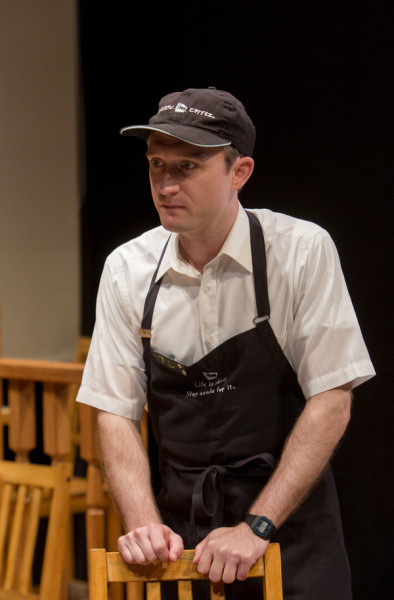 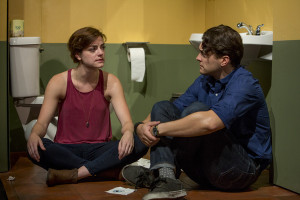 Now making its Midwestern debut, Theater Wit is staging the most amiable of plays,  Mat Smart’s Naperville. Smart is a native of the Chicago suburb, who now calls New York City home. His ode to Napervillepremiered off-off Broadway in 2014 at New York’s Slant Theatre Project. Set in the comfortable confines of a residential Caribou Coffee Shop, this western suburb is celebrated with the theme, when you are seeking answers, look toward home. Smart’s script is as rich and luxurious as a cup of any gourmet blend. His lovely poem to suburban life is a real treat in this crowded fall theatrical landscape.  Directed by Jeremy Wechsler, the initial sitcom style quickly charms as the story progresses. The warm and compassionate characters match Smart’s writing style competently. The quintet of characters on display are catty yet sentimental, and as this layered character study progresses, personally heroic. At the heart of the show, a strained relationship between and adult son and his aging mother. If only familial relationships were as easy to craft as a perfect tall soy caramel hazelnut macchiato, double milk half-caf, extra hot, with a dash of Madagascar cinnamon. 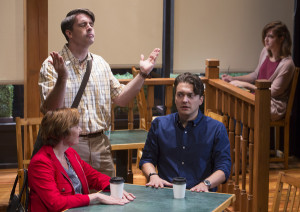 The true action of the piece centers entirely at neighboring tables of a local coffee store. The impressively detailed magnificent set crafted by Joe Schermoly utterly amazed. The cast of five delightful, quirky and eccentric characters are better as a whole then they are as individuals. We initially meet Anne (Abby Pierce) an expert on Naperville’s founder, shipbuilder Captain Joseph Naper. As she arranged her copious notes about the Captain’s life, all scribed on Caribou paper napkins, we discovered she is fashioning a podcast about Naper. More importantly, we ascertained she is recently divorced and returning home to lick the proverbial wounds of her failed marriage and painful divorce. Her relationship imploded due to her retaliatory unfaithfulness resulting from her unappreciative husband’s raucous laughter at her life’s goals. Ouch, that burned hotter than any freshly brewed cup of Caribou’s finest. 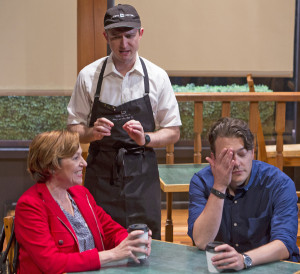 A few tables away we are introduced to Anne’s former high school classmate, Howard (Mike Tepeli) who we quickly established is considering abandoning his career and life in Seattle to return to Naperville and care for his ailing mother. Her name is Candice (Laura T. Fisher) and she has recently lost her sight after an accident involving a fall from a ladder that went untreated for days. Her doting son, equal parts guilt for being half a country away and resentment at her constant resistance to his offers to help her. When Candice asked him to describe the sky to her, her son quickly lied and says the sky was clear. When Anne later interjects about his stretching of the truth, he shared with her when his mother hears about clouds, she waxes on poetically and uncomfortably about heaven.  He is a son unable and unwilling to face her impending mortality. He beseeches her with lines including “You are not in the last chapter of your life. We are in the beginning of a new one.” 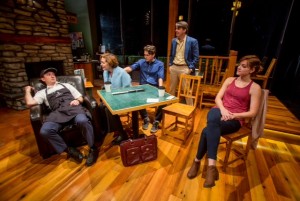 Rounding out the cast, T.C. (Andrew Jessop) the new and over eager, barista and freshly appointed newfangled manager of said coffee shop. His awkward interactions with the shops’ regulars are both delightful and humorous breaks from the drama brewing between mother and son. Lastly, there is Roy (Charlie Strater) a friendly evangelist and member of Candie’s Angels, a team of her volunteer caregivers, of potentially dubious sexual orientation. Is he or isn’t he gay… or crazy… or a bible banger?  One thing is for certain, Candice enjoys his company just as much as Howard does not. Candice also quickly plays an aggressive (and embarrassing) game of matchmaking between Anne and her son, which later culminates in an extreme bathroom confessional involving a youtube video of Olympic figure skating champion, and Naperville native, Evan Lysacek, and an outrageous admission from Anne. Like Captain Naper, each character here forges their own path to self discovery and self-actualization.

Theater Wit once again proves it has its artistic finger placed directly on the pulse of captivating and challenging new play selection. Naperville fit in quite perfectly with other recent cerebral hits like The New Sincerity, Bad Jews, and Mr. Burns, a post-electric play. The disarmingly real world costuming from Amanda Herrmann immediately put the audience at ease. The effective and emotive lighting design by Alexander Ridgers added quiet authenticity to the show’s final imaginative scene. By story’s end, the audience invested more in the team as a whole, than for just the singularly flawed (and gregarious) characters on display. A highly enjoyable and truly inspired scenario,  Naperville delighted.  As coffee shop manager T.C. pontificated, “Life is short.  Stay awake for it.”

Naperville is currently playing at Theater Wit through October 16, 2016

Claudia PerryOctober 30, 2022
Read More
Scroll for more
Tap
I Like It Like That Is Sizzling Hot With Salsa
Aisle Say On The Square: The Original Should Sister Plus One