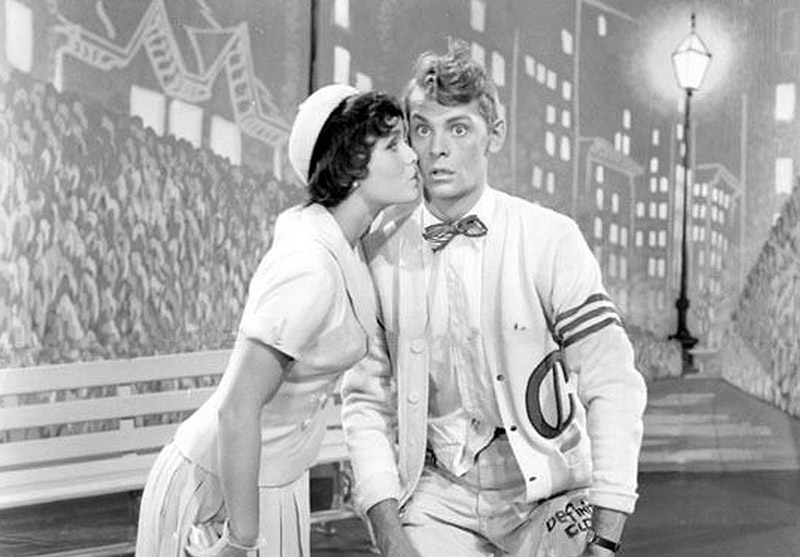 Carpenter was born on on July 10, 1926 in Bennington, Vt. He served as a Seabee in the U.S. Navy during World War II. He attended the National High School Institute for Theatre Arts at Northwestern University and began his performing career as a magician and an actor on Broadway. He began with David Merrick’s first production, Bright Boy, in 1944. He followed that up by co-starring in Three to Make Ready with Ray Bolger, John Murray Anderson’s Almanac, and Hotel Paradiso. He started in TV for NBC.  Carpenter was brought to Hollywood in 1949 by independent producer Louis de Rochemont to play the boyfriend in Lost Boundaries. De Rochemont later cast him again, in The Whistle at Eaton Falls (1951). Carpenter signed with MGM in 1950, where he made eight films in three years including Father of the Bride, Three Little Words, Summer Stock, Two Weeks With Love and others. He gained fame when he teamed in 1950 with Debbie Reynolds in Three Little Words and Two Weeks with Love. Their duet “Aba Daba Honeymoon” was the first soundtrack recording to become a top-of-the-chart gold record, reaching number three on the Billboard charts.

Shirley Temple and Carleton Carpenter brought Mother Goose to life in 1958.  He left films for stage, television and radio work. He played Gilbert Burton, the recipient of $1,000,000 in a 1959 episode of The Millionaire and was in the 1954 TV production of Kurt Weill’s Lady in the Dark, which he also recorded for RCA Victor Records.

Later stage appearances included Hello, Dolly!, opposite Mary Martin (which toured Vietnam during the war and was filmed as a one-hour NBC-TV special), The Boys in the Band, Dylan, Crazy For You, and the City Center revival of Kander and Ebb’s 70, Girls, 70. Altogether he did 10 Broadway show. In 1992 – 1996 he performed inCrazy For You.

Carpenter was also a songwriter, with credits including “Christmas Eve,” recorded by Billy Eckstine, and “Cabin in the Woods” and “Ev’ry Other Day,” which he recorded for MGM Records. He also wrote the musical “Northern Boulevard,” which was staged in New York and Vermont. Carpenter was also the author of mystery novels, including “Games Murderers Play” and “Deadhead,” and had his writing published in Alfred Hitchcock Magazine.

In 2012, he received a lifetime achievement award from the Hollywood film organization Cinecon, which was presented to him in person by his former co-star Debbie Reynolds.

He is survived by his nieces Lesley Phelps and Mrs. Michael Hall Axt, a close cousin Barbara Gallett, several other cousins and his longtime friend Alan Eichler. Services are pending and a memorial will be held at a later date. Carleton was 95 and died from natural causes.