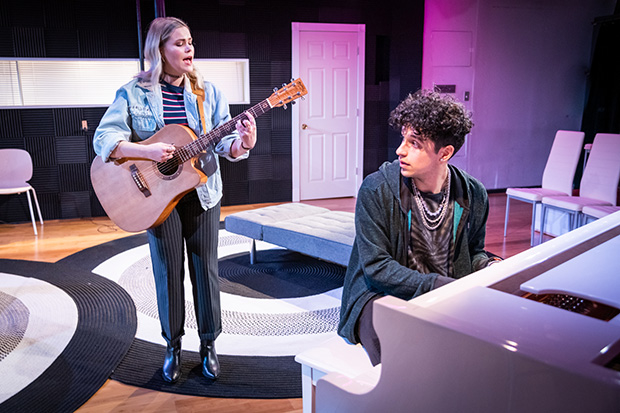 Adam Seidel’s new play at Cherry Lane Theatre, Original Sound, takes on the music industry and the rights or non rights of artists.

Ryan Reed (Jane Bruce), is the newest hot pop sensation recording her 1st album for a major label. Danny Solis (Sebastian Chacon), is a young DJ from Queens, who longs for fame. He lives with Kari (Lio Mehiel), a major fan of his work whose dad happens to own the building. His sister Felicia (Cynthia Bastidas), has come to intercede with their mother, before she finds out he quit his job. He used to live with Felicia (Cynthia Bastidas), until he got in a fight with her husband. All Danny wants to do is music and he has a small on-line following. When he discovers the first track from Ryan’s album “Sway” is directed plagiarism of a song he wrote months prior he weighs his options with the help of Kari.

One of the things that gets negotiated is a new collaboration between Ryan and Danny. When the two begin working together they clash but when Danny shows that he can play the piano, artistry and musicianship take over.

Ryan’s manager, Jake (Anthony Arkin) use to want stardom, now just manages Ryan. He wants her under the labels thumb, so to speak. When Ryan and Danny write a song that is different than what she normally does Jake tells them the song is garbage. Danny not wanting to lose this opportunity goes to his dead beat musician father (Wilson Jermaine Heredia) to get advice. From their friendships, loyalty, desperation and truths take over.

Bruce and Chacon are both wonderful musicians. They play well off each other with Chacon full of charisma and puppy dog eyes and Bruce playing the rough kid from the midwest making a name for herself, while trying to keeping her soul intact. Chacon also impresses with his piano solo composed by Armen Donelian.

Elena Araoz’s direction helps us see Danny’s relationship first with his sister and Kari, to the breaking down of walls between the star and what lies beneath.

Seidel, a former music journalist, seems to know this world and his dialogue sounds real. He brings us into the world of recording and all the traps the lie beneath wanting to be in the spotlight.

Justin Townsend’s set lets us see the ever present world of the recoding studio, as Kate McGee’s lighting and sound designer Nathan Leigh keep it real.

I look forward to seeing more of these talented actors, Elena Araoz and Adam Seidel’s work. In the meantime this play is a refreshing breath of fresh air.