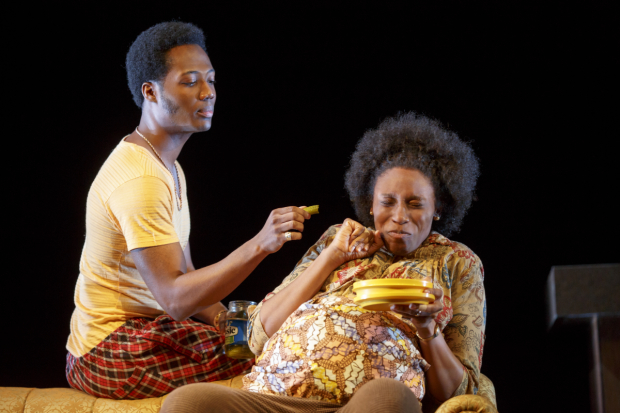 Sojourners A Second Look At Fitting In

Sojourners A Second Look At Fitting In

“will be like the trash this country puts on the side.”

I first saw Mfoniso Udofia’s Sojourners at the Playwrights Realm, let February. It wasn’t until about 10 minutes into seeing it again a the New York Theater Workshop that I realized it because it is so well acted. 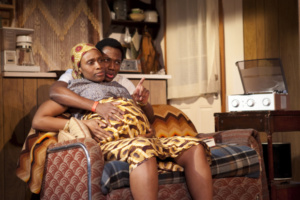 The time and place is Houston, 1978. We meet Ukpong (Hubert Point-Du Jour) and Abasiama (Chinasa Ogbuagu), a Nigerian couple who were brought together by an arranged marriage. These two are in America to go to school, return to their country, to better the education for their people. Abasiama embraces learning, while she sings Nigerian songs to her pregnant belly and eating traditional Nigerian foods. Ukpong is more into embracing his freedoms and the American ways. He does not work, drinks, skips class and consistently lies to his wife, who has become disillusioned by her husband. At the gas station where she works she meets Moxie (Lakisha Michelle May), a young prostitute, who can not read. Moxie wants to better her life but lacks the skills to do so. Abasiama takes the young girl under her wing. When Ukpong abandons her, Abasiama goes into labor, Moxie and Disciple (Chinaza Uche), a Nigerian student gets her to the hospital. Disciple seeking an angel in a strange land and sees Abasiama as his solution, as does Moxie. In the end Abasiama abandons her child to her husband to start her new life. 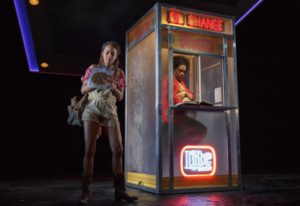 Ms. Udofia, layers her characters with such depth. By the end of the play we know these people, we understand their wants, their desires, flawed as they are. What Ms. Udofia has failed to do is write a complete ending and she leaves the audience hanging. Paul Davis/ Calleri Casting, really out did themselves with this ensemble cast who could not have been better.

Ed Sylvanus Iskandar directs this with a carousel set by James Sherwood, that lets us know, that despite the everyday troubles, life keeps moving on. Jeremy S. Bloom’s sound design lets us know the era and emotional landscape.

Most will see this show as a debate over immigration, but it is not. Fitting in, feeling exiled, tradition vs freedom, faith and needing somebody to understand you are a universal themes. It doesn’t just happen to the Nigerians, but also Moxie who was born and raised in Texas. We need to stop seeing each other as distant for we all have these dilemma’s. It’s time to get over that division.

Sojourners and Her Portmanteau are two chapters in an ambitious nine-play cycle (much of which is yet unwritten) following four generations of the Nigerian-American Ufot family.