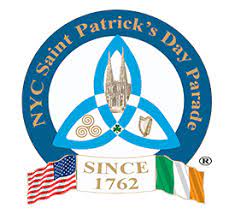 New Yorkers normally let their Irish Pride out on full display with the Annual St. Patrick’s Day Parade on March 17. The Parade was one of the first major city events to be cancelled last year due to COVID-19. The Parade is the oldest and largest parade in the world and has marched on the streets of New York City every year since 1762, fourteen years before the Declaration of Independence that established the United States of America. This year will mark the 260th St Patrick’s Day parade in New York City. The parade usually starts at 11am at 44th Street, marching up Fifth Avenue—past St. Patrick’s Cathedral at 50th Street—all the way to 79th Street and finishes around 5:00pm at the American Irish Historical Society at East 80th Street.

This year is virtual. Here is a schedule of events

At 8:30am a live broadcast of St Patrick’s Day mass from St. Patrick’s Cathedral. (Private Mass – Closed to the Public)

At 10am a one hour-long show streamed on Facebook,  produced by world-renowned TV producer Mike Mathis. The show will include greetings from Irish and U.S. political and community leaders, entertainment by Andy Cooney and Moya Brennan along with greetings from members of the armed services serving abroad, to name but a few.

At 7pm NBC – St. Patrick’s Day: A Celebration For All

On March 17th the Parade leaders will join a select number of First Responders and Essential Workers (listed below)
to offer a prayer for all the victims of the pandemic and the “Twin Towers” to mark the 20th anniversary of 9/11 for the live stream event.

The date is due to the death of Saint Patrick, Ireland’s most celebrated patron saint.

Genevieve Rafter KeddyNovember 24, 2022
Read More
Scroll for more
Tap
Tune Into Swing 46 For a 12 Hour Benefit Today Starting at Noon
What to Watch in The New Year: March 15