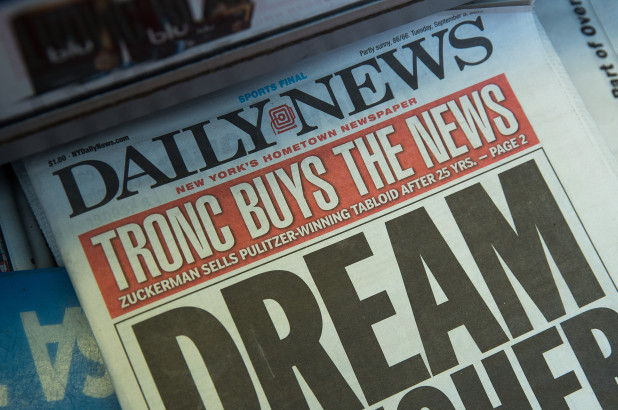 IS THE NEWS REALLY OVER? — Conflicting reports this week regarding NYC’s 99-year old Daily Newsnewspaper; which was always subtitled New York’s Hometown Newspaper.  It was reported that they were closing their newsroom, effective immediately; vacating their offices; and, that the remaining minions would work from home (24 writers were effectively let go).

By week’s end, reports said that the paper would continue in an online fashion only. Also, their subtitle was subtlety scrubbed from the front page.

The New York Daily News has had a rocky road of late. When Mort Zuckerman owned it, they were in a heated rivalry with the town’s other sheet, the New York Post. Zuckerman finally offloaded it to The Tribune, who has made it a regular practice to close papers.

How could such an celebrated newspaper  fold? Many reasons. It was just reported that for the first time ever, readers of the esteemed old Gray Lady, the New York Times, were more digital, than not. If that’s true, it’s amazing it took this long. Face it, digital is much more efficient. Plus, you don’t overnight develop a pile of newspapers in the corner! Trust me, I know.

The News was a great, great paper and in their heyday, was a fierce competitor to the Post and Times.Their Rush/Molly column was simply terrific. George Rush and Joanna Molloy were terrific writers and got some of the best scoops ever. Truth be told, their column was/is right up there with Roger Friedman’s. Their Mike McAlary was a terrific reporter. Liz Smith was … well, Liz Smith. All much missed.

Ben Widdicombe’s Gatecrasher column was a terrific read and Dick Corkery’s photos were just terrific. Btw: Corkery was a true gentleman, a friend and great soul.

BRUCIE IS BACK — Well, that didn’t take long. Hot on the heels of his exit from SiriusXM satellite radio, Cousin Brucie Morrow revealed this week that he will return to his roots hosting Cousin Brucie’s Saturday Night Rock & Roll Party”on 770 WABC in New York.

“Its part of one of the most amazing moves I’ve ever made in my life,” adds Morrow. “I was with SiriusXMfor 15 years, and they were good years, but I was getting the feeling that I should make a move. I should do something to finish my career circle. Not that I’m finishing — I’ve got plenty to go.”

The Brooklyn-born Morrow, 84, will launch the next phase of his radio career with his first show on Sept. 5, with a special repeat broadcast two days later on Labor Day. The show will be heard on 77WABC and sister station WLIR-FM 107.1 in Hampton Bays, New York. Both stations are operated by John Catsimatidis’ Red Apple Media, which will also make the show available to fans through its digital media platforms for streaming on phones, smart speakers and computers.

Until recently, Cousin Brucie was heard by paid subscribers tuning in to his Wednesday and Saturday night programs. Prior to that, he held stints at 1010 WINS, 660 WNBC, and 101.1 WCBS-FM. Many of his listeners go back with him to the 1960’s, when he introduced the Beatles at Shea Stadium — “probably one of the most amazing moments in my life,” he says. “I can still feel the electricity in my body.”

In an interview with Variety shortly after the news hit, Morrow shared his thoughts on the move, what fans can expect, and how much he’s actually missed commercials.

Q: Making this move from SiriusXM back to 770 WABC where it all began is major… the biggest radio personality news of the summer, for many people.

Morrow: I felt that I should get back into (terrestrial) radio. I missed the audience — the people who couldn’t pay the subscription. If you looked at my Facebook page, you’ll see. I think every other mention was WABC radio. Rock ‘n’ roll music in my career really started at WABC.

Q: How did John Catsimatidis orchestrate your return to AM?

Morrow: John is the gentleman who purchased WABC. He always listened to me on Saturday nights. He would drive in the car with his wife and listen to me. He used to request songs. So he and I became very friendly on the phone. A very major part of live radio is telephone… that is my connection to the audience. One thing led to the other, and eventually the son of a gun bought the station. And we started talking about “what if?” And then sure enough, one day we signed on the dotted line. So I’m very about this change. I’m going to rebuild my audience, and they’re very excited. It also has a national footprint; the radio station streams all over. So that’ll be a very important part of retaining what I’ve built over 50 years, and this audience in the tristate area is going to be treated to radio on WABC, which has been all-talk. Now on Saturday night, it becomes music radio.

Q: Tell us about the format.

Morrow:  The format will be the 50’s, 60’s, 70’s and 80’s, and anything else that anybody wants to hear, I can play. I have complete free reign. I program my own shows and the shows will be really a variety of a lot of great music, a lot of great talk and guests. You’re going to be surprised about what I am about to say now: I can’t wait to do my commercials again. I missed my commercials. I do a lot of live reads, and I make these commercials very much a part of what I do, and what I do is get very involved with my audience. I learned a long time ago that I become a part of my audience’s family, part of their lives. They’re in the shower with me, in the car with me, they shop with me, and I can feel it. And I’m very excited about getting it back again.

Q: If this goes well, could that open it up to other music in dayparts on the weekend?

Morrow: Absolutely. It would be an important decision for them to make, and they are doing pretty well with their talk format. But the music format will bring them a whole new audience. They will keep a lot of their audience, but there could be a crossover, and the idea of opening up the weekend to music would be a brilliant idea.

A few thoughts: Catsimatidis is an interesting character. I believe he’s tried to run for Mayor here in NYC, several times. He also owns the supermarket chain Gristede’s. He sort of lurks in the shadows and emerges ever so often. I’ve met him through James Edstrom  and liked him a lot. This is an audacious play and if anyone can do it, Catsimatidis can.

Also, Morrow brings up a very interesting point. Terrestrial vs. Satellite. Satellite you pay for. In these COVID-times, everyone I know is cutting expenses and at the end of the day, satellite radio might be the one thing you cut. Having listened to radio my entire life, when satellite radio reared its head, I knew the playing field has changed. I wonder if Morrow’s return to terrestrial will be a sea change. I predict it will.

… Whatever became of Honey West? The fabulous outfit featuring Ian McDonald and Ted Zurkowski. After a dynamite first album and a few stellar shows – Bowery Electric and Steve Walter’s Cutting Room … nothing, Management problems? I wish them well …

Just heard the opening to the hot, new Michael (Trump) Cohen book, Disloyal. Rachel Maddow read it last night on her MSNBC show and my first thought was, how did this guy learn to write so well? As shocking as the revelations are, it’s written terrifically well;. almost poetic … A friend of mine said the virus will be over right after the election. Harrowing for sure … Rockers On Broaday-creator Donnie Kehr working on his first solo album. In the 80’s, Kehr formed the band Urgent, which was signed to the much missed EMI/Manhattan Records. I heard several of the tracks exclusively, and they were just terrific. Stay tuned … U.K. DJ Greg Wilson in an interview,  goes on to pinpoint the key difference between novices and masters: “Whilst the DJs now are more technically gifted, DJs back then had better programming skills. They were more adept at getting the right records at the right moment. They worked more towards the audience, whereas now DJs expect the audience to come to them” … TV legend Sally Jessy Raphael’s husband of 57 years Karl Soderlund has died at the age of 90. A close family friend said Soderlund passed away from complications due to Alzheimer’s disease on Thursday morning in Dutchess County, New York. They added: ‘He put up a courageous fight against Alzheimer’s and Parkinson’s for the past five years and he never lost his brilliant sense of humor.’ The two met in Puerto Rico and married in 1962, and Soderlund lovingly referred to Raphael as ‘red.’ Raphael is known for paving the way for women to host TV talk shows, but she credits Karl as ‘the architect of the career which made her a household name’  … Robert Miller’s Project Grand Slam’s new album East Side Sessions is a major hit. Plaudits from all over are in the mix … RIP George Christy and Trini Lopez; Happy BDay Lisa Cuddy!