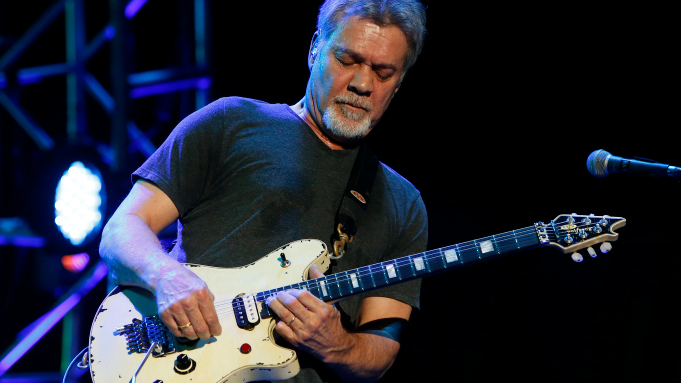 EDDIE VAN — (from Roger Friedman/SHOWBIZ 411) Sales of Van Halen CDs and downloads jumped 3,133% in the 48 hours after Eddie van Halen’s tragic death was announced. According to Buzz Angle, sales this week in those formats totaled 28,000, up from 866 the week before.

And those numbers are just for Tuesday from around 5:00 PM through Thursday night. Van Halen records have been selling like crazy ever since then. So it’s quite a tribute to Eddie that his fans have gobbled up everything.

A most deserving tribute for Eddie Van Halen, dubbed the Mozart of rock. As we said last time, his talent was extraordinary – and, he started out as a keyboard player!

Here’s a rather amazing story from Pete Townshend: “I was once asked by Michael Jackson to play electric guitar on the Thriller album,” Townshend told Rolling Stone. “I said I couldn’t do it but recommended Eddie who called and we chatted. He was utterly charming, happy about the connection, but told me how much he was enjoying playing keyboards. His smile was just classic. A man in his rightful place, so happy to be doing what he did.”

“It’s completely tragic that we have lost him,” he adds. “He was not just an innovative and stylish player with great taste, he was also a laid-back virtuoso showman who just blew us all away every time. Every shredder today has lost their Master Teacher and Guide.”

“As he got older he became more generous and amusing and self-effacing about his enormous gifts. He shared so many tricks through guitar workshops, online and on TV shows. Immense talent. The Great American Guitar Player. I was hoping he might be President one day,” Townshend says.

BROADWAY BOUND — With last week’s announcement (from Charlotte St. Martin of the Broadway League) that Broadway in NYC won’t open again till at least June 2021, a sharp chill was sent out to the some 97,000 workers involved on the Great White Way.

If shuttered through June 1, 2021, that will mean between 14 to 15 months of closures – a closure that was originally scheduled to last only a month.

What the Broadway League’s announcement didn’t mention, was what was to become of the many restaurants, retail outlets, clubs, and other associated businesses in the theater district. From Joe Allen’s on down, the fate of each establishment is now totally up in the air. If there are no patrons … how can these businesses continue? Outdoor seating is a novel step, but once the cold weather (rain and snow) come into play, will outdoor seating even be realistic?

Was the death knell summarily summoned? If there are no patrons … how can one survive?

Face it, since late-February; most of these shops have been closed down. Sure, insurance in some cases will factor in, but for the vast amount of the people employed, they’re left in the cold. Their first run of unemployment insurance has already run out and another run, is currently in doubt.

One online paper last week said that this could indeed be the end of live entertainment as we know it. I personally know of two Broadway-PR firms that are shuttering this week.

SHORT TAKES — From TMZ: It’s not another day in paradise. Phil Collins is kicking his ex-wife out of his Miami mansion, according to sources close to the singer-songwriter. Collins, 69, plans to file an eviction lawsuit to remove Orianne Cevey, who says she isn’t going anywhere and recently changed the security codes at the home, according to TMZ. Cevey, 46, threatened to release potentially embarrassing and false accusations against Collins if he continues with plans to remove her from the sprawling mansion, according to a source. Cevey and Collins originally divorced in 2008, after he reportedly paid her a $46 million settlement, the celebrity website reported. The couple, who have two sons, reconciled in 2016 after Cevey divorced husband Charles Mejjati. She married another man — Thomas Bates — in Las Vegas two months ago, telling Collins that she was on a business trip at the time, TMZ said. Sources told TMZ that Cevey wants to renegotiate her 2008 divorce settlement from Collins after she squandered the fortune in bad investments and a divorce from Mejjati. If you recall, Collins’ debut solo album, Face Value, in 1981, which included the mega-hit “In The Air Tonight.” Collins said at the time that the entire album was influenced by his divorce from Cevey …

Per an article in this week’s Hollywood Reporter, LA’s limousine services are either closing or in disarray. “This was not on any of our business plans. Terrorist attacks, stock crashes, all that stuff, we had a backup for 90 days to 120 days for our business, but not with things like a pandemic,” says KLS Worldwide Chauffeured Services founder Alex Darbahani. On March 2, his company had booked 260 events for the year (of the roughly 500 it does annually); nearly all of those gigs have since been canceled. As a result, KLS has laid off 75 percent of its staff.

Another unintended casualty. Sad for sure … Celeb-author Mark Bego is wrapping us his next book, on “Band Of Gold” singer Freda Payne. Meanwhile, Skyhorse Publishing, re-releases his Eat Like A Rock Star in November …

And, Paris-based Japanese designer Kenzo Takada, famous for creating the international luxury fashion house Kenzo, died in Paris on Sunday due to Covid-19 related complications, a spokesperson for Takada’s luxury K-3 brand said in a statement sent to CNN. His death came in the midst of Paris Fashion Week, which, through a hybrid of physical and digital shows, has forged ahead despite rising Covid-19 cases in France. “It is with immense sadness that the brand K-3 announces the loss of its celebrated artistic director, Kenzo Takada. The world-renowned designer passed away on October 4th, 2020 due to Covid-19 related complications at the age of 81 at the American Hospital, in Neuilly-sur-Seine, France,” the statement read.