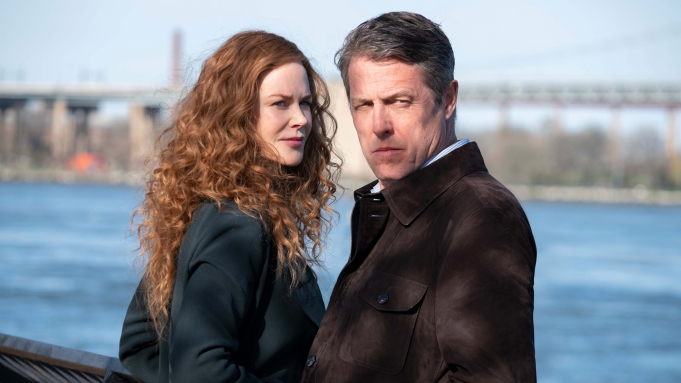 THE UNDOING — Is it Nicole Kidman overkill … or what? HBO’s The Undoing (six episodes) … is just so-so; the visuals, the clothes, the apartments are all first rate  for certain… but, after viewing the second episode … it’s just an old fashioned whodunit dressed up a bit. Anyone expecting another Big Little Lies (which was written by TV-whiz David E. Kelley), as was this one) must have been severely disappointed … I know I was.

Based on the 2014 novel You Should Have Known by Jean Hanff Korelitz, it’s one crazy book for sure. It’s good, but after Lies, I wondered what attracted Kidman to this one …as she produced it.

In the first episode, the characters were quickly laid out and then the crime is committed. It took me a minute or so to figure it all out … but, I did and the plot moves along much like HBO’s The Night Of … which I loved.

Hugh Grant is just sensational. Face it, despite his Divine Brown imbroglio (in 1995) the guy’s a great actor. Any doubt about that was corrected by last year’s A Very English Scandal. Donald Sutherland, who looks great, but getting a bit long-in-the-tooth is his usual sensational self and Lily Rabe (Jill Clayburgh’s daughter) just terrific. This will undoubtedly be the vehicle to finally make her a certified star.

There’s a mysterious girl as well; one that ultimately has connections to almost everyone. Edgar Ramirez as the cop who comes down hard on our Nicole is just sufficient … a little too harsh is you ask me.

Our colleague Roger Friedman, in his review, raved on about the visuals: great overcoats and all … and, he’s right on the money.  When Kidman is taken to the police station wearing a coat a Madame Bovary might wear … it’s just a tad over the top.

Six episodes sounds exactly right! Also, if Kelley is again back at the top of the heap … why hasn’t he cast his wife, Michelle Pfeiffer, yet? That’s the real quetsion methinks.

TRACY RETURNS — Much-missed in action Grammy winner Tracy Chapman made a rare television appearance Election Eve, performing her “Talkin’ ‘Bout A Revolution” on Late Night With Seth Meyers, and making a plea for everyone to vote.

“This is the most important election of our lifetime,” Chapman said in a statement released ahead of her performance on Late Night. “It is imperative that everyone vote to restore our democracy.”

“I’ve always thought Tracy Chapman’s music skips your ears and goes straight to your heart,” Meyers said. “I’m so honored and excited to have her on the show. She’s living proof you can be a great artist while also speaking out for what you believe in.”

Chapman performed the song in front of a black curtain. Noticeably, she tweaked the last chorus, making it even more timely, concluding with “Talkin’ bout a revolution, go vote.” She then stepped away from the microphone to reveal a small “Vote” sign.

Chapman’s last major television performance was in 2015, on the final season of The Late Show With David Letterman.

Hard to believe that song is from 1988 … as it sounds as fresh as ever!

You can watch her performance on the video here:

SHORT TAKES — I went to bed Tuesday night with the pundits still doing their thing and when I woke Wednesday morning … they were still saying the same thing. So far, the only refreshing thing was the downplaying somewhat of COVID-19. A break from that story was very nice … Could that train-wreck of a show TMZ, be another (albeit unintended) casualty of COVID-19? The brainchild of former-Celebrity Justice-wag Harvey Levin; the show (as is their webs-site) is filled with the trials-and-tribulations of the rich and  nearly famous. Kanye’s latest breakdown; David Foster’s latest marriage; anything-Phil Collins …. they’re all fully represented there. TMZ followed the celebs outside; at hotels; parties; events … and, literally shoved a microphone in their face to get a comment about this … or, that. Ambush journalism at its worst! These days; everyone’s home and their ratings took a sharp nosedive last month and even though they’re bought-and-paid for by Time-Warner, AT&T -the new owners- are not thrilled. Truth be told, it’s a crap-fest of a show and the employee turn-over rate there is simply shuddering. Literally, Levin changes his staff monthly.

Angie Banicki, who was the PR-gal in NYC (and, great!) for the terrific Elizabeth Glaser Pediatric AIDS event, has become a celebrity tarot card reader. Check it out: http://www.angiebanicki.com/ …

And, my God, I think Vito Bruno won!