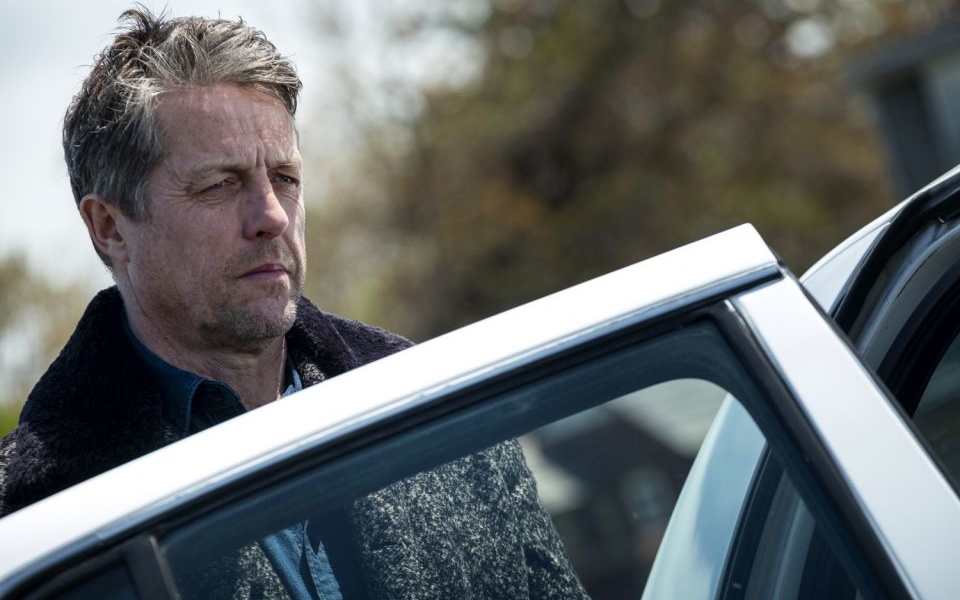 UNDOING UNDONE — The finale of HBO’s The Undoing unspooled Sunday night and was in every way a total letdown. In reading some viewer posts before the show; it seemed that almost every character in the show could have done it (the murder of mistress-Elena). And, the posts were pretty creative and specific. While it was not a Who Shot JR? moment, nor a Who Killed Laura Palmer?, it did ignite the Internet.

Turns out, Hugh Grant did it!

After just a splendid display of acting in episode 4, Donald Sutherland, was relegated in the final two episodes, to just sitting in the chambers and every so often, giving a “damning look” towards Grant. Lily Rabe, the so-called friend and lawyer who Jonathan had hired, on the side, was picked by a large number of viewers  to have done it … but, she didn’t really do or say much either in that finale.

Elena’s husband and son were also picked by a large number of viewers … and, they didn’t do it either. And, for that matter, either did Sutherland aka Grace’s father. Btw: that was my pick.

There were so many unanswered questions, I would love to have a tete-a-tete with writer David E. Kelly, and ask him why these things were never again addressed after they were shown on screen. A veritable sea of red herrings if you ask me.

The vibrant painting that Elena had done of Grace went totally unexplained and was never referenced again after viewers were shocked by its existence. When Franklin exited his limo in front of Elena’s apartment and just stared up into the apartment … that too was never again addressed either.

Again, this was just a dressed-up whodunnit … and, ultimately not very satisfying at all.

After Kidman’s Big Little Lies opus, with Kelly as the writer, I expected far, far more. I think, considering where 2020 has left us, this was a guilty-pleasure for sure. Dazzling homes, expensive clothes (and, coats); helicopters and limos … I mean, it was sort of a Dallas/Dynasty wet dream that ultimately amounted to very little.

Grant, after threatening to jump off a bridge at the conclusion, finally surrendered, so there’s room for a Part 2, but I wouldn’t watch. Once bitten, twice shy I say. I’m glad it was a huge hit for HBO, but compared to The Sopranos and Mad Men, it wasn’t even in the same league.

ELLIOT PAGE — Oscar-nominated Juno actor and star of Umbrella Academy Elliot Page has come out as a non-binary and transgender.  Many may know them as Ellen Page, however, from here on out, the public should refer to them as Elliot Page. The actor shared their experience on their Instagram page.

“I want to share with you that I am trans, my pronouns are he/they and my name is Elliot,” said Page. I feel lucky to be writing this. To be here. To have arrived at this place in my life.”

Page was very candid about sharing their experience, saying that they are overwhelmed with gratitude for the support they are receiving during this journey. “I can’t begin to express how remarkable it feels to finally love who I am enough to pursue my authentic self,” they said.

In addition, Page realizes that coming out publicly will be another journey. “I ask for patience,” they admit. “My joy is real, but it is also fragile. The truth is, despite feeling profoundly happy right now and knowing how much privilege I carry, I am also scared. I’m scared of the invasiveness, the hate, the ‘jokes’ and of the violence. To be clear, I am not trying to dampen a moment that is joyous and one that I celebrate, but I want to address the full picture.” They go on to discuss the violence against transgender people and the increase of murders of trans people of color in the past year.

They remain hopeful and confident in their identity and in the world, maintaining their advocacy for the LGBTQ community. “I love that I am trans. And I love that I am queer,” they said.

GLAAD sent their support to Page. “Elliot Page has given us fantastic characters on-screen, and has been an outspoken advocate for all LGBTQ people,” said Nick Adams, GLAAD’s Director of Transgender Media. “He will now be an inspiration to countless trans and non-binary people. All transgender people deserve the chance to be ourselves and to be accepted for who we are. We celebrate the remarkable Elliot Page today.”

Page has been and continues to be an advocate for the LGBTQ community, being very vocal about issues impacting the queer community. They are also an advocate for environmental issues. They haven’t been shy about sharing their feelings about Mike Pence and came forward to address how Brett Ratner verbally abused and outed them on the set of X-Men: The Last Stand.

In addition to appearing in Juno, Inception and starring in the Netflix graphic novel series Umbrella Academy, Page made their directorial debut alongside co-director Ian Daniel for Netflix’s There’s Something In The Water. The documentary is based on the novel of the same name by Ingrid Walton. The film explores the scourge of environmental racism through the lens of Indigenous and African Nova Scotian women fighting to protect their communities, their land and their futures.

They also starred in Lauren Morelli’s revival of the ‘90s LGBTQ mini-series, Tales of the City. On top of that, they created and produced the Hulu docuseries Gaycation, which earned two Emmy noms.

SHORT TAKES — Celebrity-scribe Mark Bego checked out his Eat Like A Rock Star book; just re-released in paperback, at the Foothills Mall in Tucson, Arizona. The book btw remains in the Amazon Top Ten …

We caught the first installment of Kaley Cuoco’s The Flight Attendant on HBO Max and loved it. Her Penny character from The Big Bang Theory is somewhat evidenced here and Cuoco is just delightful. The plot is a flight attendant wakes up from a night of extreme partying with a passenger she met on a flight and he is … dead! The rub is that the dead-man keeps a running dialogue with her throughout and at the end of the first installment, she remembers a third party during that night. Captivated for sure …

Say what you will about Kathie Lee Gifford, but she’s a survivor. She was on Tuesday’s Today show and talked about her new book Never Too Late. I don’t know how her much-hyped movie with Craig Ferguson did (Then Came You), but it was ever-so-briefly mentioned in the interview; which is never a good sign. Surprisingly, she didn’t mention long-time TV partner Regis Philbin who passed this summer. I know some people jump at an opportunity to say something nasty about Ms. Gifford, but to me, she’s a treasure. I trust Carla Sacks is not handling the PR for this one! … Someone sent us the new music-video from 13-year old Kjersti Long, entitled “I’m Not Your Princess.” Pretty impressive with Long and her band. She’s a powerhouse for sure. Van Dean’s Broadway Records has a hit with this one … The wonderful Alison Martino posted a picture of Peter Falk (TV’s Columbo) at the long-gone, much missed Chasen’s. What a great LA-restaurant for sure. Dave Chasen treated everyone there like a prince. Right up there with the original Palm on Santa Monica; Le Dome ; Nicky Blair’s and Dana Tana’s. I’ll never forget my first night there, as I ran into a veritable cavalcade of stars … with names like Nicholson, Leno, Evans, Taylor, Wagner and Beatty. They’ll never be another one like it … And, Happy BDay Jerry Lembo!

Suzanna BowlingSeptember 23, 2022
Read More
Scroll for more
Tap
What To Watch December 2nd To Take Away The Blues
My View: CD Review…Nicolas King….Act One