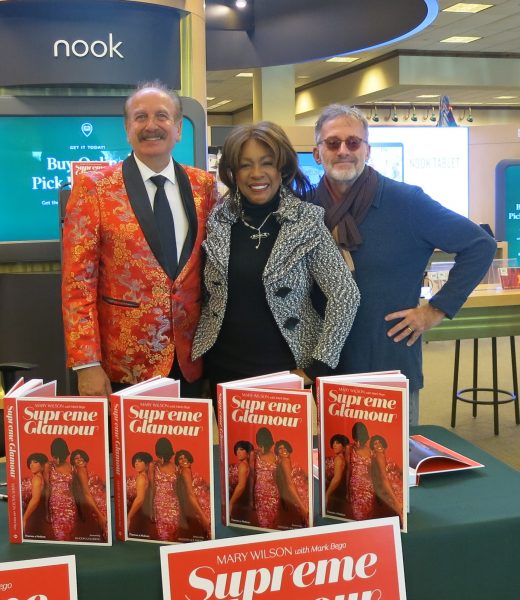 I also attended several in-stores the pair did at Barnes and Noble (courtesy of B&N’s terrific Dan Zelinski) and I was terrifically impressed with the way Wilson carried herself; talking to every patron and engendering a sense of fun. I also attended a party with them at the Blackbarn in lower Manhattan for Supreme Glamour, where she again was just terrific.

Added Bego, “Mary Wilson was without a doubt the most gracious, beautiful and fun-loving person I have ever met.  We were best friends for over 45 years, and the thought of losing her has me in shock and saddened beyond belief. On Sunday of this week she called me and we talked, and laughed, and made plans for our next adventure together.  The next morning she was gone.”

I’ll never forget seeing The Supremes on the Ed Sullivan Show eons ago. They scored 12 number-one singles in Billboard until their final performance in 1970. Inspiring for sure, she was a major force in music.

Debris will premiere on Monday, March 1 at 10 p.m. ET/PT, NBC announced during its first TCA panel on Tuesday. In addition to teasing the upcoming series and unveiling the premiere date, the Debris team also talked parallels to Fringe.

“There’s always going to be my DNA in the show,” Wyman, who serves as executive producer and showrunner said. “But it’s definitely its own thing.”

Like Fringe, Debris follows government officials as they investigate when wreckage from a destroyed alien spacecraft has mysterious effects on humankind. Riann Steele will star as MI6’s Finola Jones and Jonathan Tucker as the CIA’s Bryan Beneventi.

While the series will feature different stories driven by the odd effects of the alien leftovers, Debris will see the relationship between the two leads develop and gain complexity as the show continues.

“Joel has given us this opportunity to kind of come in and discover the debris, but then it really opens it up the rest of the episode and it’s fun for us as actors, for sure, but I think it’ll be fun for audiences to see and speaks to the kind of cable level sci-fi that we’ve become accustomed to that you can have, you can have a bit of both,” said Tucker.

During the panel Wyman and his two lead actors also spoke about starring in Debris as the United States and other parts of the world continue to struggle with the coronavirus. The showrunner said, thanks to NBC’s ability to follow Covid-19 safety protocols on set, he feels lucky to create during such difficult times. Steele and Tucker shared the same feelings of gratitude, noting that the “hurdles that we have to jump are really minuscule compared to what so many other people are dealing with.”

The panel concluded with Wyman, who also created Almost Human, discussing his love for the sci-fi genre. While it may be easy to get caught up in the spectacle of androids and aliens, Wyman said that science fiction can explain a lot about the human condition.

“After I saw Close Encounters I literally sat on my roof with my mother trying to find something…I’ve always been fascinated by space and that there’s got to be something more,” he said. “Maybe there’s a side of me that wishes that the world was a little bit more advanced as far as how we all get along and how it all makes sense.”

Fringe was a series that has, at least to me, only gotten better since it’s departure in 2013. I’m really not familiar with either of the actors, though Tucker has been in several Law & Order-shows. I’m intrigued and am looking forward to this one.

SHORT TAKES — I love The Weeknd’s “Blinding Lights” – don’t get me wrong; but, is there really anything truly original in that song? I mean, to me, it’s like Bruno Mars 2021. His Super Bowl stint was just OK … again, nothing I’ve not seen before, although it did make me think about Prince’s dramatic performance in 2007 there … yes, performing “Purple Rain” in the rain and all. And, just for the record, what’s up with all the masks on the faces and dripping blood? Most probably think it’s all about the pandemic, but he’s had fixation going on for quite some time. Anyway, re-live the Prince show with this clip:

… Producer Richard Perry, who’s worked with everyone from Ringo Starr to Harry Nilsson … and, Tiny Tim, has his autobiography released next week called Cloud Nine. I did some research and it turns out its on a small pub-company (which bills itself as your concierge publisher … whatever that means) called Redwood Publishing. Shouldn’t this title have been with a major company like Simon & Schuster or St. Martin’s? Don’t get it, but can’t wait to read … I had occasion this week to watch the Wendy Williams Show and The View. My God, both train wrecks.

The View-crew zoomed from home and though it look outrageous, at least they didn’t have the chance to all talk at the same time. Also, Meghan McCain talks so fast, I was getting a headache trying to follow her. The View has never been this bad. I bet even creator Barbara Walters can’t stomach it …

Been watching the Fran Lebowitz Netflix Docu Series, Pretend It’s A City; exec. produced by Marty Scorsese. I love Fran, but listening to her for too long is akin to scratching your nails on a blackboard. Second: Scorcese who plays the interviewer here, is a great, great audience – he laughs at everything Fran says. It’s all about New York – the way it was pre-COVID.  Its great, but if you’re not from New York, you might not get it … Queen Latifah’s Equalizer was very well done and it was good to see Chris Noth back on the screen. And, Adam Goldberg, as the hacker was excellent … although he always is. It was a ratings hit with 20 million … The Super Bowl just had 96.4 million …

Suzanna BowlingDecember 30, 2021
Read More
Scroll for more
Tap
Seeking Submissions for “You Will Be Found” Winner Gets a $10,000 College Scholarship and More
What to Watch in The New Year: February 11