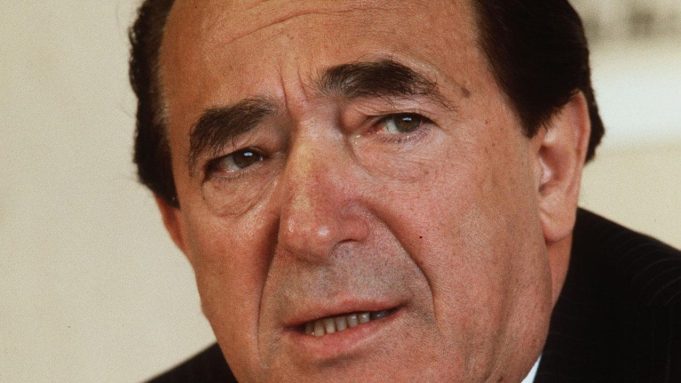 The book, published by Viking on February 4, chronicles the business tycoon’s rise, scandalous fall and untimely death. A Czech immigrant to the UK, Maxwell built a publishing empire, and became an MP, before he was found dead overboard from his yacht in 1991; it was posthumously discovered that he had improperly used funds from the Mirror Publishing group’s pension pot to cover his other companies from bankruptcy. His youngest child is Ghislaine Maxwell, who is currently charged with sex trafficking crimes related to her links to Jeffrey Epstein.

“Robert Maxwell is one of the fascinating, complex figures of the 20th Century and I think Working Title are the perfect people to turn it into a television series,” said Preston.

Mogul Maxwell acquired the New York Daily News from the Tribune Company in March 1991. Other bidders included Mort Zuckerman, owner of U.S. News and World Report and the Atlantic Monthly. Actually, Tribune paid Maxwell $60 million to take the paper off its hands, most of which went for severance pay and buyouts. Maxwell negotiated $72 million in union concessions and reduced the paper’s workforce from 2,600 jobs to 1,800, of which 1,500 were unionized. The allied unions agreed to a one-year wage freeze and to changes in work rules, but retained the right to have staff levels determined by contract rather than by management.

Following the strike the paper’s circulation was down to fewer than 800,000 copies daily and less than one million on Sunday.

When he passed, there were numerous rumors that he had been murdered. Done correctly, the movie could be a big one. Who should play Maxwell? I say DeNiro is the only choice!

BACK IN THE HOUSE —Crowded House will release Dreamers Are Waiting, their first album in a decade in June.

“We were fortunate to be recording in the studio right before lockdown and so began this album with band tracks recorded live in a room, all brimming with character and energy. We then spent our strangest year, 2020, at distance from each other but connecting daily, swapping files and making those tracks complete. We’re so excited and grateful to be back in one room together now, rehearsing, first to play live in front of audiences in New Zealand and soon we hope for the rest of the world,” said Neil Finn in a statement.

The last Crowded House album Intriguer was released in 2010. Dreamers Are Waiting will be released on 4 June 2021.

Check out their video for the track “To The Island”:

HERE’S CRUELLA —(Via the Verge) There’s a moment in the first trailer for Disney’s live-action Cruella movie when Emma Stone utters in a terrible faux British accent, “I am woman, hear me roar.” It feels less like something Disney fans will remember from the iconic 101 Dalmatians-villain, Cruella de Vil, and more like Jared Leto’s Joker telling Batman, “We live in a society.”

All of which is to say that Disney may have found its own Joker-type character in Stone’s Cruella de Vil… but, not necessarily in a good way.

Cruella is set in 1970’s London. Stone plays the soon-to-be-villain in an origin story of sorts. She’s an aspiring punk designer — and a grifter — who is trying to get society’s wealthiest people to take notice of her and her designs. Throughout the process, she becomes the infamous Cruella de Vil. (If that story sounds somewhat familiar, it may be because it’s seemingly very similar to Jenny Humphrey’s arc in Gossip Girl’s second season.) The way Stone is playing the villain also has hints of Joker and Harley Quinn, leaning into the “madness” of the character and upping the dramatics of it all.

Now, of course, this is just a trailer, and we’re all aware that movies aren’t always best represented by their trailers. Cruella could turn out to be an amazing film; we’ll just have to wait and see. Disney’s track record with live-action films is relatively hit or miss, though. The Lion King, Aladdin, and Beauty and the Beast soared to more than $1 billion at the box office, but Dumbo lost Disney a sizable chunk of change, and Mulan premiered to lackluster reviews. While Cruella is inspired by 101 Dalmatians, it’s not a direct adaptation. Disney tried the same formula with Maleficent: while the first film performed well, the follow-up, Maleficent: Mistress of Evil, underperformed.

Cruella is set to be released on May 28th. Currently, it’s due out in theaters, but as Disney CEO Bob Chapek noted on the company’s recent earnings call, things could change with its theatrical slate depending on where the world is at with the current pandemic. That means there’s a chance Cruellacould wind up on Disney Plus either instead of in theaters or alongside a theatrical release. If that does happen, expect more information in the coming weeks.

SHORT TAKES — Fleetwood Mac’s Christine McVie said she didn’t know whether she would tour again with The Mac. But, Big Mick’s been making noises about one final-Fleetwood Super Tour, with all the surviving members included … with Lindsey Buckingham.

We’ll see … Robert Miller, from Project Grand Slam, is jumping on the podcast wagon with his Follow Your Dream broadcast. Launching shortly, his first guest will be air-personality (and, legend) Bruce Morrow …

In the wake of the passing of Supreme-Mary Wilson, her last book, written with Mark Bego – Supreme Glamour (Thames & Hudson) is # 1 again on Amazon. here’s a shot of Wilson and Bego with the writer’s next subject, Freda Payne …

Never much of a Rush Limbaugh fan – even if he did start out as a rock ‘n roll DJ, but there’s no denying the impact he had on talk-radio. He liked to think of himself as America’s Anchorman for the conservative right … and, he was. Face it: every talk-show jock should thank him; from Stern to Mark Simone and Opie and Anthony on down. There have been many imitators to Rush, but none really have even come close ... Big Sky’s Let It Be Him episode this week was spectacular. Big Rick died … again and this time for real, and from the hands-of his wife no less (Brooke Smith). Just terrific writing and a high-speed race with a Tesla was brilliantly done. Just a phenomenal show and though it’s off till April, I see that the terrific Ted Levine officially joins that cast. John Carroll Lynch as Big Rick was spot-on … an Emmy (or, two) is definitely due … And, Happy BDay Bobby Hart