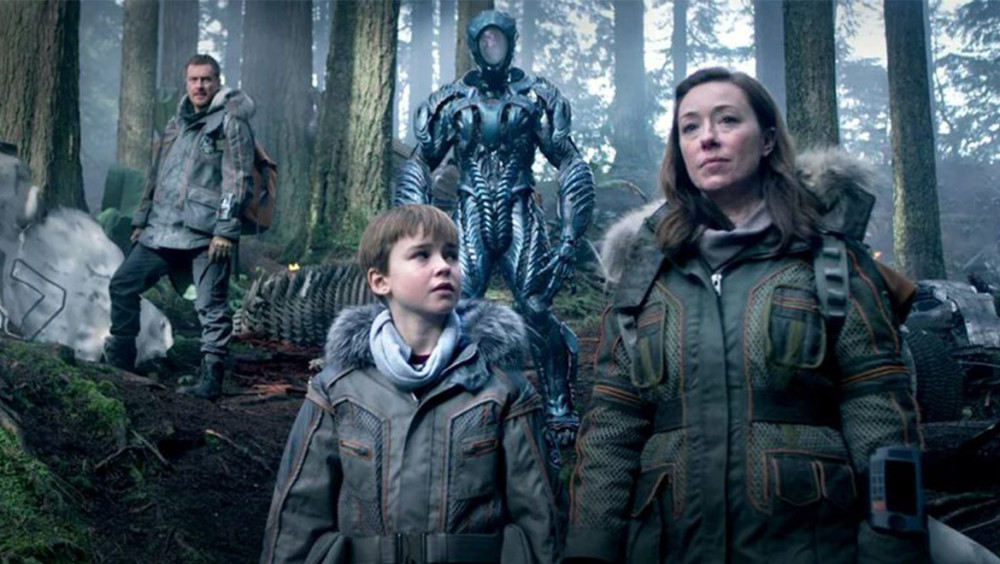 LOST IN SPACE 2 — One of the best cable shows I’ve seen in years (along with Maisel; Fleabag and Mindhunters) was the 2018 re-booted Lost in Space on Netflix. Sure, I was a fan of the original show (1965-1968): campy and fun for sure. Created by the legendary Irwin Allen (he also created Voyage To The Bottom of the Sea); it dealt with the lost-in-space Robinson family.

The re-boot, developed by Matt Sazama and Burk Sharpless, switches to a very-dramatic and dark take; and, re-imagines the evil Dr. Smith (originally played by the whimsical Jonathan  Harris) as a woman; which is a spot-on performance by Parker Posey.

For some reason the 2018 take was only a middling hit and there was some question as to whether there’d be a Season two. On December 24,  Season Two debuts. Yes, it’s a strange time to drop a new season, but from the trailer, it looks tremendous.

Season One ended with the Robinson’s officially leaving the robot, which had helped only young-Will, but is seemingly possessed by some sort of trauma, which left many of its actions in question.

Parker, as Smith, befriends young Will to do her bidding. Again, Posey, known for her quirky roles, hits a high mark here.

Also tremendous are, Molly Parker, Toby Stephens and, Maxwell Jenkins. For fans of the original series (and, yes, there are still some around!) the robot has been given a re-boot too; now looking terrifically menacing.

If you haven’t seen this show yet; start with Season One. The money it cost to do this is all on the screen; sumptuous special-effects. It’s tremendous.

GOLDBERG PASSES — (Via Deadline) Leonard Goldberg, a former president of 20th Century Fox and Head of Programming at ABC who’s numerous producer credits include creating Charlie’s Angels and Blue Bloods, along with such shows as T.J. Hooker, Family and Fantasy Island and many other TV show and movies, has died. He was 85. The Emmy winner died from injuries resulting from a fall December 4, his publicist told Deadline.

In partnership with Aaron Spelling, Goldberg was behind a string of hit TV series including Charlie’s Angels, Hart to Hart, The Rookies, Starsky & Hutch, Fantasy Island, Family and S.W.A.T. He won the NAACP Image Award for Television Producer of the Year for LAPD drama The Rookies.

Classic ABC series that bowed during his tenure include The Mod Squad, That Girl and Marcus Welby, M.D. He also was a pioneer of the made-for-TV format in the 1970’s.

“Television will always be here,” Goldberg said in a 2004 interview for the Television Academy Foundation. “It is the most powerful medium I’ve known of since the first time I saw it and why I switched from advertising to television. And when it’s used for all of its good, it’s fabulous.”

Goldberg also produced many feature films, including Charlie’s Angels (2000) and Charlie’s Angels: Full Throttle (2003) and had an EP credits on this year’s Charlie’s Angels reboot from Elizabeth Banks. Other feature credits include Unknown (2011), Double Jeopardy (1999), The Distinguished Gentleman (1992), Sleeping with the Enemy (1991), SpaceCamp (1986), WarGames (1983), All Night Long (1981) and Little League comedy sequel The Bad News Bears in Breaking Training (1977).

The many 20th Century Fox hits released during his run as president include Broadcast News, Big, Die Hard, Wall Street and Working Girl.

“Unlike the engineer who builds a bridge to span a specific space or the lawyer who deals with the finite laws of our society,” Goldberg once said, “We, in the entertainment industry provide only flickering images on a television or movie screen. All we are bound by is our imagination, our creativity and our passion.”

Goldberg shared three Outstanding Drama Series Emmy noms for Family, which aired on ABC from 1976-80, and won an Emmy for the drama special Something About Amelia in 1984. He received a motion picture Showmanship Award from the Publicists Guild in 1984, was awarded a star on the Hollywood Walk of Fame two years later and was inducted into the Academy of Television Arts and Sciences Hall of Fame in 2007.

Born on January 24, 1934, in New York, Goldberg began his broadcasting career with ABC’s research department. He moved over to NBC a year later, advancing to the position of Supervisor of Special Projects. He then joined Batten, Barton, Durstine Osborne Advertising but returned to the ABC Network as Director of New York Program Development, and quickly rose to become VP Daytime Programming..

During his tenure at ABC Daytime, Goldberg introduced such memorable shows as The Dating Game, The Newlywed Game and Dark Shadows. A year later, he was named Head of Programming for ABC, a position he held for the next three years. It was during this period that he developed and introduced the new primetime format — Movies Made Directly for Television — which immediately became a favorite with viewers everywhere and which still provides some of the medium’s most innovative and stimulating shows. Among those ABC telefilms with John Travolta starrer The Boy in the Plastic Bubble.

Under the aegis of his Mandy Films, Goldberg produced Something About Amelia, the 1984 ABC telefilm starring Glenn Close and Ted Danson. The highest-rated two-hour movie of its season, and one of the highest-rated ever for television, it reached as many as 70 million viewers. Amelia was internationally acclaimed for the frank and sensitive handling of the subject of incest.

NO NBC LOVE FOR DARLENE — From Darlene Love: Once again I was snubbed by Brad Lachman Productions who produce the Rockefeller Christmas Tree Lighting Ceremony and instead they book another artist to perform my song “Christmas Baby, Please Come Home” each year!!!

Such an insult and let down!

They book these young artists who can’t even hit the notes properly and are off key.  Makes NO sense!!!

That’s my song and I’m still alive. Show me some respect!

My publicist has been trying for over ten years to lock this performance down for me and they keep saying that I’m not their demo or big enough and would only book me if Bette Midler or Bruce Springsteen would do it with me.

I would NEVER ask my friends to do that.  If you want them, go thru their team.

This business can be so unfair at times.

Don’t get me wrong, I’m TRULY blessed for what I have accomplished at 78 years of age, but it’s still a constant struggle to stay relevant and convince those who control the industry that I’m worth it.

I’m turning off the TV.  Gotta rest up for my holiday tour.

Thank you to all my fans and friends who do support me.  You keep my spirit happy and alive.

Forgotten Hits’ Kent Kotel summed up my thoughts perfectly: “It IS a shame that they ignore the artist who made this song famous … especially when she is ready, willing and able to sing it every year.  (What demo-friendly artist did they get to sing it instead?  When I saw the guest list for this show, I didn’t even know half of the names!)

So sad that anything to do with Christmas “tradition” is thrown by the wayside.”

You’d think that with the year NBC has had, they do it for the  positive ink they’d get. Amazing!

SHORT TAKES — Broadway’s J. Robert Spencer performs his “Waiting On Christmas” Monday night at the Broadway For All event at Lincoln Center, with Tony Shalhoub (Marvelous Mrs. Maisel) hosting. It will be the debut performance for this new-Christmas-classic. Earlier Monday Spencer gets the podcast treatment from Zach Martin on his nationally-syndicated Big Fat American Podcast …

Celebrity-author Mark Bego guested at Linda Solomon’s book-launch last week in Tucson (and, even talked about his encounter with Ms. Franklin to the assembled gathering) for her new book on Aretha Franklin, The Queen Next Door: Aretha Franklin – An Intimate Portrait. Bego and Solomon are veterans of the legendary Kelly & Company TV show in Detroit, on WXYZ. Bego also visited with Micky Dolenz at his 50 Years Ago show Friday night show at Phoenix’s Celebrity Theatre. Dolenz by the way, is interviewed by Alec Baldwin this Tuesday for his podcast … As predicted, the Palm Restaurant empire is for sale. The legendary white-table cloth restaurant chain has been in Chapter 11 for the past year and in the opinion of many, in serious decline for years. We spoke to someone who ate there last week (after the David Bryne show) and said it just wasn’t what it once was. PR-pasha David Salidor, who handled the PR-for the West Side location for five years, said, “It was inevitable. When they jettisoned all the PR-people years ago, the writing was on the wall. The personnel, who went onto to run everything, just didn’t have their hearts in it. I can’t really comment on the court case which they lost, but it was unacceptable that they apparently attempted to defraud some of the original owners. With the right people running it, it could have reclaimed its original glory. Very sad for sure” … Happy Bday to Anthony Noto … Legendary photographer Reanne Rubinstein has passed. Here’s an excellent obit from The New York Times: https://www.nytimes.com/2019/12/05/arts/raeanne-rubenstein-dead.html?searchResultPosition=1&fbclid=IwAR3UA1DmazBgQnymY9uhYNakKMTpUGvqrkqc6PBq1Z1ZMs8ygVfeukXZ6NQ …What is up with Nancy Peolosi’s right hand? Truly disturbing. Like something from a Hammer-horror epic … Nashville’s Dennis Scott, the man behind the terrific Thank You Mister Rogers CD, with artist like Micky Dolenz; Lee Greenwood; Jon Secada; The Cowsills;

Rita Wilson; and Marilyn McCoo and Billy Davis, visited Wine Down last week, in Nashville, to discuss the CD before an audience. Wine Down is the brainchild of musician John Billings and his wife Amy; a mainstay in Dolenz’s band for years …

We raved about 12-year old Kjersti Long earlier this year; a rave review in Digital Journal on her debut album (Stronger Than You Think I Am) … then nada. What happened? We tried to get to her PR-man, then found out he had resigned the project. Last week she appeared at a talent show in Flemington, New Jersey. We hear a major magazine is doing a story on what happened and the behind-the-scenes drama. Stay tuned  … Been listening heavily to Robbie Robertson’s latest album, Sinematic. Just terrific. A beautiful, sonic journey. Its close to being my #1 album of the year along with Stephen Bishop’s terrific, but way under-promoted We’ll Talk About It Later In The Car  … Top movies of the year so far include: One Upon A Time In Hollywood; The Irishman; and, Dolemite Is My Name … Best play so far: David Bryne’s American Utopia … We watched Netflix’s Marriage Story last night. The film has so far received just exemplary reviews and awards. I didn’t care for it. Sort of like a 2020-Kramer vs. Kramer. I love Adam Driver and he is the best thing in the movie. But I just didn’t get it …

Just got the new Chicago Christmas album, Chicago Christmas 2019. It’s been a great last few years for the band and we’ll get into the album next column … Not for nothing, but the version of “Electric Youth” that Debbie Gibson performed at the Thanksgiving Day Parade was not the original. It was a nice updated version for sure, but I miss the original. Great track for sure …RIP Ron Leibman.