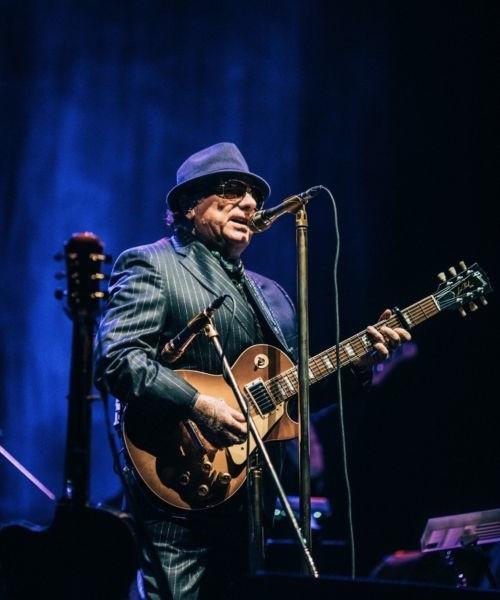 VAN THE MAN — (Via Rolling Stone) Van Morrison has released a new track, “Only a Song,” from his upcoming album, Latest Record Project: Volume 1, which is set to arrive May 7th via Exile/BMG.

“Only a Song” boasts a fluttering soul groove led by a spirited organ and interspersed with call-and-response vocals and a couple of blazing sax solos. “Only a song when everything’s said and done,” Morrison croons, “At the end of the day, in the warmth of the sun/It’s only a song, in the wintry snow/When the penguins march along and go home/It’s only a song.”

“Only a Song” marks the second offering from Latest Record Project, following the self-aware title-track, which was released at the beginning of March. Latest Record Project: Volume 1 is Morrison’s 42nd studio album and boasts a whopping 28 songs, which the musician wrote and recorded in quarantine (which, as he’s noted on numerous occasions, he’s not particularly fond of).

Per a press release, Latest Record Project will feature at least one song about life in lockdown, “Deadbeat Saturday Night,” although the track list does not include any of the anti-lockdown songs Morrison released last year. Check out the new release here:

WHERE’S NORMAN? — Netflix’s Golden Globe-winning comedy The Kominsky Method returns for its third and final season on Friday, May 28.

Created by nine-time Emmy nominee Chuck Lorre, the series centers on Sandy Kominsky (Oscar winner Michael Douglas), an aging actor and acting coach, who has long navigated the challenges of growing older, alongside his close friend, Norman (Oscar winner Alan Arkin)—but now has to do so without him. Per Netflix,Season 3 will deal with “money, death, love, murder, and dreams coming true. In other words, the usual.”

Further complicating Kominsky’s life in the upcoming season is the presence of his ex-wife, Roz Volander (played by Oscar nominee Kathleen Turner). While the pair have long shared a volatile relationship, tensions escalate when Roz arrives in L.A., to spend time with their daughter Mindy (Sarah Baker) and her rather eccentric boyfriend, Martin (Paul Reiser).

No word on Norman, or, Arkin. But, when they announced the next and last season, Netflix did acknowledge Norman would be gone? Arkin was just superb and him playing alongside Douglas was like a master class in acting.

Also, no mention whatsoever of the brilliant Nancy Travis, who played Sandy’s gf in the first two seasons. She was great paired with Douglas.

Truth be told, I always thought a perfect ending for this show would be to have Sandy, land a HUGE acting gig and have massive success with it. We’ll see what happens.

MILLER ROCKS — Project Grand Slam leader Robert Miller has Michael ‘Eppy’ Epstein (owner and operator of the legendary rock club My Father’s Place) on his podcast this Monday (Follow Your Dream) and he relates a story about recent Grammy Award winner James Taylor (for his American Standard album).

Both Miller and Epstein, in Boston at the same time in the 60’s, saw a performer at the local Psychedelic Supermarket venue … and, it was Taylor. Says Miller, “I walked in and there were like four people there … but, I knew instantly I was watching a very significant performer and artist.” Epstein concurs, “I immediately booked him for several more local shows in Boston.”

And, The rest is history!

SHORT TAKES — Roadie or groupie, Tana Douglas has an interesting story to tell in her new book Loud. Take a look at a recent Page Six post: https://nypost.com/2021/03/20/roadie-recalls-george-harrisons-proposal-iggy-pop-stealing-jacket/?_ga=2.247706255.985795870.1616332788-940839063.1599827720 … Speaking of books, still no Cloud Nine; producer Richard Perry’s biography via Redwood Publishing. He must be livid. We first contacted them on February 16 about reviewing the book and were told that it was in the works from their Sara Stratton. Too bad, from the reader reviews on Amazon, it sounds like a winner; and, really, how could it not be. Let this be a lesson for all writers: distribution is key … Happy BDay Jacqueline Boyd … and, RIP George Segal!

G. H. HARDINGJune 1, 2021
Read More
Scroll for more
Tap
What to Watch in The New Year: March 25
Cuomosexual The Beginnings and the Ends of a Term