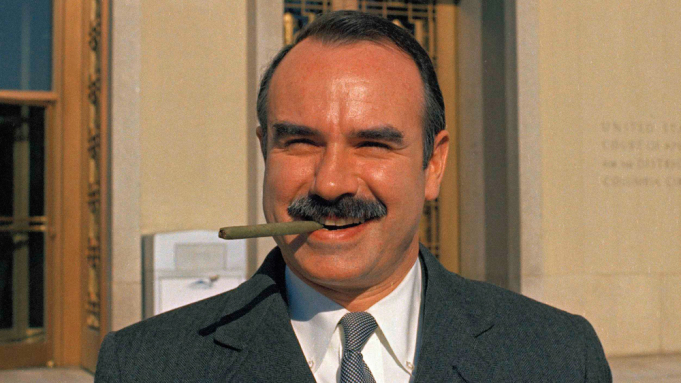 LIDDY PASSES — (Via Deadline) G. Gordon Liddy, a central Watergate figure who spent more than four years in prison but went on to appear in a number of TV series, a few films and hosted a radio talk show for two decades, died Tuesday in Virginia, his son Thomas told media outlets. He was 90.

Unrepentant till the end, the imposing, mustachioed Liddy led the “Plumbers,” President Nixon’s secret White House group, but was not among those caught burglarizing the Democratic National Committee headquarters at the Watergate complex in June 1972. Still, he was tried on conspiracy and burglary charges as the mastermind of the scheme. Also convicted of refusing to testify at the Watergate hearings, he served more than 51 months in federal prison.

He famously did not implicate Nixon, but the 37th president of the United States was forced to resign in August 1974 amid the growing scandal.

Liddy is referenced — but his character did not appear — in the 1976 Watergate film All the President’s Men, when Washington Post reporter Bob Woodward (Robert Redford) tells his source Deep Throat (Hal Holbrook), “We’re beginning to hear a lot about a lawyer, crazy, Gordon Liddy. Gordon Liddy was fired by [John Mitchell] because he wouldn’t talk to the FBI.” After a few beats, Deep Throat replies: “I was at a party once and, uh, Liddy put his hand over a candle and he kept it there. He kept it right in the flame until his flesh was burned. Somebody said, ‘What’s the trick?’ and Liddy said, ‘The trick is not minding.’”

When Woodward complains that the reporters only have pieces but can’t figure out how to tie them together, Deep Throat famously tells him to forget the myths the media has created and “follow the money. Always follow the money.”

Born on November 30, 1930, in Brooklyn, Liddy by the mid-1980’s became something of a media darling. He appeared on Tom Snyder and David Letterman’s respective late-night talk shows early in the decade and earned his first acting credit in for playing crooked CIA agent William Maynard, aka “Captain Real Estate,” in a 1985 episode of Miami Vice directed by star Don Johnson. He reprised the role for a Season 3 episode the following year.

In the next few years, Liddy would guest on such series CBS’ helicopter drama Airwolf, ABC’s original MacGyver, NBC’s big-truck actioner The Highwayman and others. He also appeared in some episodic TV in the early 90’s and recurred on Al Franken’s late-90’s NBC comedy LateLine and the syndicated action series Super Force.

He also appear on game shows and reality competitions, including a two-week run on Super Password and competing in the celebrity version of Fear Factor that served as the series finale of NBC’s original run in 2006.

Liddy got his first starring TV role, playing a crime boss in the TNN crime drama 18 Wheels of Justice opposite Lucky Vanous, who was a fed posing as a truck driver. Billy Dee Williams co-starred on the series, which aired 44 episodes over two seasons from 2000-01. The show hailed from King World Productions

In 1992, Liddy began hosting a syndicated talk show for Radio America — a gig he would hold until his retirement in 2012. He also was the voice of a talk show host in Rules of Engagement, William Friedkin’s 2000 thriller starring Tommy Lee Jones, Samuel L. Jackson and Ben Kingsley.

Liddy’s other film credits include co-starring in the 1990 feature Street Asylum — about a city that is terrorized by a rogue police force — Adventures in Spying (1992) and Underdogs (2006).

I wonder if Anthony Pellicano (aka the Pelican) had Liddy as a role model. The notorious Hollywood fixer never divulged what must have been a wealth of information about his star-studded clients. He too was convicted and spent 16 years in prison. But, when he got out, there was bank account in his name with a ton of money there.

Liddy, who most likely has been forgotten over the years (as has Oliver North), was an unforgettable character. Certainly more brawn than smarts … but, he never gave up the goods as it were. When he appeared on two Miami Vice-episodes in the 80’s, he was unsurprisingly good. His character’s nickname, Captain Real Estate was spot-on.

He also correct in an interview that the story from All The President’s Men was never a candle, but a cigarette-lighter. Touche!

I remember which I was in High School literally addicted to the daily Watergate hearings, led by the indefatigable Senator Sam (I’m just a country lawyer) Ervin.

Maybe the one hero of the whole Watergate-imbroglio is the Watergate Hotel. I never even knew there was a Watergate Hotel … but, it’s been used in numerous movies and TV-shows since as a prominent Washington locale. As a good PR-pal said, “You can’t buy press like that!”

KNIVES BACK — (Via SHOWBIZ 411) The first film was a crazy hit from LionsGate, getting Oscar nominations and lots of kudos. Everyone loved that murder mystery. Ana de Armas became such a star she moved in with Ben Affleck for a while. Chris Evans made cable knit sweaters sell out. Don Johnson had his best role since “Miami Vice.”

Now  Deadline.com is confirming our scoop. The sequels will come from the bottomless money pit of Netflix, not Lions Gate. Rian Johnson has written them or is finishing them. Daniel Craig, who may wind up his James Bond run if “No Time to Die” is ever released, headlines another franchise. He’s terrific as Benoit Blanc.

The next installment films this summer in Greece. Johnson will have actors clamoring for roles, but he’s smart not to have superstars. just eclectic casts like chapter 1. Will any of the original cast return? Something tells me Ana de Armas, now free of Ben Affleck, will turn up to help Benoit solve the crime. Maybe the victim will be killed wearing a cable knit sweater!

That first movie was curious for sure. Great cast, Craig was awesome, but was it a great story?

If memory serves, it came out when there just wasn’t much else around … and, yes, Craig was the calling card.

Sort of like Agatha Christie-on acid if you ask me. Jamie Lee Curtis was superb, as was Don Johnson.

Director Johnson, if he’s smart, will definitely grab Ana de Armas – as she was terrific. But, a better, more ingenious story might be called for. What do you think?

And, btw: Is that James Bond movie ever coming out?

SHORT TAKES — Decades-old East Village institution the Pyramid Club — known at its heights for its drag performances and punk rock scene — will not be reopening after the coronavirus pandemic. Managers Maria Narciso and Quirino Perez confirm that the venue’s owners have decided to permanently close after 41 years, citing the economic downturn from the pandemic and a lack of guidance around nightclubs being able to reopen. Like countless restaurants and bars across the city, the Pyramid Club temporarily closed its doors in early March ahead of the indoor dining shutdown but never reopened them. “No one expected this pause to last more than a year,” Narciso tells EV Grieve. “While many businesses were allowed to open with heavy restrictions, nightclubs and performance venues/theaters have suffered the most.” Narciso, along with fiancé Perez, reportedly had plans in place to reopen the bar with a food menu and socially distant dance floor, but they were never able to present them to the venue’s owners. “For decades, managers have run The Pyramid Club with unfortunately very little communication from the owners,” adds Narciso. “We don’t know what their plans are, as they are very private people and rarely, if ever, talk about their business plans with us” …

Micky Dolenz will appear at Steel City Con in Pittsburgh June 11-13 and the first single from his eagerly awaited album Dolenz Sings Nesmith(7a Records) will be “Different Drum.” That single will be available April 23. “Different Drum” (written by Nesmith) as I understand it, was first brought to The Monkees’ Don Kirschner, but was rejected and Linda Ronstadt had a major hit with it. It was always a favorite and can’t wait to hear Dolenz perform it …

Richard Thompson, from Fairport Convention, has a memoir coming out entitled BEESWING: Losing My Way and Finding My Voice (1967-1975 (Algonquin Books) on 4/6. Fairport Convention was an era-defining group. This one should be excellent. More to come on this one … Ivan Taub’s (from The Oxfords) new play Mercy Street debuts online this Sunday … And, HAPPY BDAY Peter Abraham and (former Anna Nicole Smith mouthpiece) David Granoff.