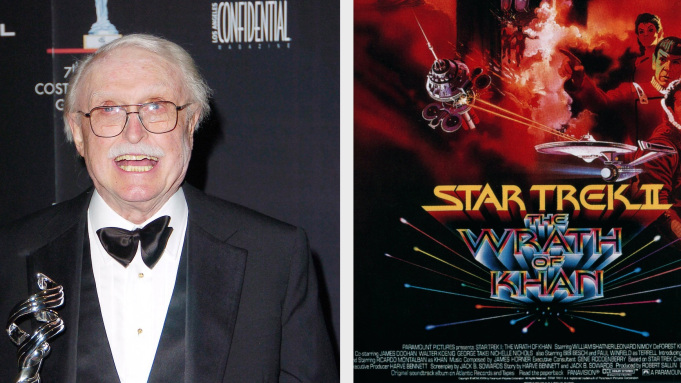 TREKKER DOWN — Robert Fletcher, a costume designer whose more than six decades of credits on screen and the Broadway stage included the first four Star Trek films, died April 5 in Kansas City, MO. He was 98.

A cause of death was not disclosed, but a spokesman for the three-time Tony-nominated Fletcher said the designer died peacefully.

Fletcher’s work on the Star Trek films – Star Trek: The Motion Picture, The Wrath of Khan, The Search for Spock and The Voyage Home – earned him three Saturn Awards nominations (honoring science fiction, fantasy and horror movies) including a win in 1987 for the fourth film in the series. He was especially remembered for establishing the look and style of the movie franchise’s Klingon and Vulcan characters.

For the stage, Fletcher designed sets and costumes for Lincoln Kirstein’s ballet and opera projects, worked with Jerome Robbins, designed the costumes for the original Broadway productions of the musicals How to Succeed in Business Without Really Trying and Walking Happy and designed the costumes for – and played the role of Edgar in – Orson Welles’s 1956 New York City Center production of Shakespeare’s King Lear, Happy (1966), Borstal Boy (1970), The Flying Karamazov Brothers (1983) and the 1982 revival of Seven Brides for Seven Brothers.

For television, Fletcher’s career in the 1950’s included being NBC’s general designer and, in the 1960’s and 70’s, he designed costumes for The Hollywood Palace and The Dean Martin Show. He was nominated for a Primetime Emmy Award for Outstanding Costume Design for a Miniseries or a Special for North and South, Book II (1986), and in 2005 he was given the Career Achievement Award from the Costume Designers Guild. He received a Theatre Development Fund/Irene Sharaff Lifetime Achievement award for his set design in 2008.

Fletcher was preceded in death by his husband of 65 years, Jack Kauflin, a singer, Broadway dancer and original member of the New York City Ballet.

ADAM SCHLESINGER TRIBUTE — Micky Dolenz of the Monkees, R.E.M., Dashboard Confessional and The Black Keys are turning out for a virtual tribute concert next month for Adam Schlesinger, who died of COVID-19 a year ago.

Adam Schlesinger, A Musical Celebration, Virtual Show will premiere May 5 on the Rolling Live platform, with proceeds going to MusiCares and the venue The Bowery Electric.

Schlesinger, a prolific songwriter, was best known for his band Fountains of Wayne but was a producer and writer for several projects, including the television series Crazy Ex-Girlfriend, whose star, Rachel Bloom, is booked for the tribute.

He also produced The Monkees Good Times; their first album of new material in 20 years.

Others who will perform or pay tribute include Courtney Love, Sean Ono Lennon, Drew Carey, Chris Carrabba of Dashboard Confessional, Peter Buck of R.E.M., Patrick Carney of the Black Keys, James Iha of Smashing Pumpkins, Ben Lee and Taylor Hanson. The lineup is expected to expand.

The tribute is being organized by Jody Porter, Schlesinger’s former bandmate in Fountains of Wayne.

“This is a proper musical send-off for my soul brother with a bunch of talented and groovy guests that would make Adam wince,” Porter said.

SHORT TAKES — Our Philly-eye-guide Chuck Darrow reports that their historic, legendary Tower Theater will be demolished. Say it ain’t so Chuck. Awful news … RIP Rusty Young of Poco at 75 … Pick of the Week: “Down To The Waterline” by Dire Straits. What a outstanding track. Check it out here:

SIGHTING: J.D. Belcher at Angelo’s Italian eatery celebrating the release of his The Inescapable Consequence this week via Yorkshire Publishing …

This week was the third –Say Hello To My Little Friend– (of 9) episode of Christopher Meloni’s Law & Order: Organized Crime and I’m happy to report it’s all starting to comer together. Meloni’s Stabler is beginning to bond with Ayanna Bell, the head of the task force. And, Dylan McDermott continues to shine as the dastardly Richard Wheatley. After a brutal beating on the previous episode, Stabler is back and the last scene is him arresting his assailant after a pretty amazing outdoor sequence. The show is getting better and better … Was Friday the release of a new Freda Payne CD entitled Let There Be Love?  Her book project with the always-prolific Mark Bego is due this September via Yorkshire Publishing, called Band of Gold …

Just read an outstanding review of Robert Miller’s new album Miller Rocks. by Wyatt Kennedy. Check it out here: https://ventsmagazine.com/2021/04/16/robert-millers-newest-album-miller-rocks/ … And, producer Scott Rudin stepping back? Those in the know say it won’t make a bit of difference. I must confess, when the Hollywood Reporter first did that cover story on his abusive behavior, i did say that I never heard about it. Sicne the publication of that story, I have become privy to ten such stories. His deputy Eli Bush will run things … with Scott surely in the shadows. Remember that great movie Tropic Thunder? The character Less Grossman was supposedly based on Rudin.