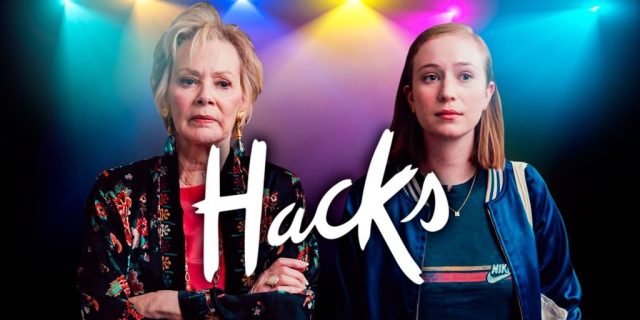 HACKS – HBO’s Hacks ended its first season last week with two delicious episodes. Honestly, the ending is not what I would have written, but it tied everything up nicely and set the stage for its just-greenlighted Season 2. This show is the best thing I’ve seen on the streaming services since Ted Lasso. Jean Smart (who’s also been in Mare of Eastwood and Dirty John) just blows the doors off the screen as Deborah Vance and Hannah Einbinder (as her now aide-de-camp writer) Ava is brilliant.

Face it, Smart has never been better and when Emmy time comes around; her name must definitely be there. Just superb work Miss Smart! Bravo.

Attention must also be paid to Kayla (Megan Stalter) who essays the secretary of series creator Paul W. Downs, who himself plays the agent Jimmy. Some of her Kayla’s actions merit a MeToo intervention, but she’s just hilarious. Also, Christopher McDonald as casino owner Marty is a hoot.

Just a sensational show all round.

ROMEO DELIGHT AT THE CUTTING ROOM — After a Saturday SRO show at The Landis Theater, Romeo Delight takes the stage at Steve Walter’s The Cutting Room this Saturday night, June 19, in NYC. In addition to their show, the #1 Van Halen Tribute band will perform a special tribute to the late Eddie Van Halen.

Their PR-rep tells us that there are two in-the-works documentaries coming about Van Halen and Delight’s Buddy Blanchard will be interviewed for both of them. They’ll also be some bold-faced names in the house for the Saturday performance, as well as photographer Jeff Smith. We’ll be there front-and-center and have a first-hand report.

STILLS STILL DANCING — (From Something Else) Crosby Stills and Nash was at work on the long-awaited follow up to 1970’s Deja Vu, when Stephen Stills ducked across the hall to take a guest turn on a song that would become a multi-chart smash: The Bee Gee’s 1976 single “You Should Be Dancing.”

Yes, listen closely: that’s Stills on timbales. For years, it would occupy a footnote as the most successful song ever to feature Stills. Not Buffalo Springfield’s “For What It’s Worth,” his own “Love the One You’re With,” and certainly nothing from the album that would become 1976’s CSN — though Stills’ “Fair Game” did get reach the Top 50. Instead, it was this track.

Even as CSN (which also featured Graham Nash and David Crosby) was peaking at No. 2 on the Billboard album charts (and Nash’s “Just a Song Before I Go” was racing to the Top 10), the Bee Gees had helped define a new dance craze in disco — with an early assist from an unlikely source.

“You Should Be Dancing,” released as part of the Bee Gees album Children of the World and showcased in the film “Saturday Night Fever,” would hit No. 1 on the Hot 100, top the dance club play charts, go Top 5 in the UK and even reach No. 4 on Billboard’s R&B list. Stills says he was certain, even before the project arrived in stores, that the Bee Gees were onto something special.

“We were in the studio next door making a CSN album,” Stills tells the Independent, “and David was all full of himself and saying this is going to be the album of the year. I went, ‘No it’s not, that’s being recorded across the hall,’ ’cause I’d heard some of that ‘Saturday Night Fever’ stuff and I knew it was totally unique and going to be a monster. So I played timbales and for a long time that was my only platinum single.”

SHORT TAKES — Terrific album review of Dolenz Sings Nesmith by author Mark Bego in the current issue of Keith Girard’s New York Independent. Bego, if you recall, did the authorized biography of Dolenz in 1993, I’m a Believer: My Life of Monkees, Music, and Madness. Here’s the album review: https://www.thenyindependent.com/music/217966/micky-dolenz-sings-mike-nesmith-album-review/?fbclid=IwAR2F_YujO94YhT-A9I12-_0YnvRIU_3plN7dEs8u1S1-FzJxYMFwMuQ3JSA…

Can you believe it’s been 14 years since The Sopranos went off the air? Amazing, right? I know many still ask whether the finale made sense and is Tony still alive? My answer is that people are still talking about it … and, yes! Check out this terrific article on the show and its lasting impact: https://www.news.com.au/entertainment/tv/flashback/the-sopranos-ended-14-years-ago-but-we-still-want-to-know-did-tony-die/news-story/d86c8150cb4efc695c06993d676f139e …

Robert Miller’s Project Grand Slam returns on June 27 at SteelStacks at the Levitt Pavilion. Check it out here: https://www.steelstacks.org/event/10677/project-grand-slam/ … Michael Domino’s movie (written and directed) Mott Haven, with Die Hard’s Robert Davi toplining, is out in July … And, pretty spectacular season finales  from NBC’s New Amsterdamand Manifest. The later, not yet renewed for another season, left some tantalizing clues.