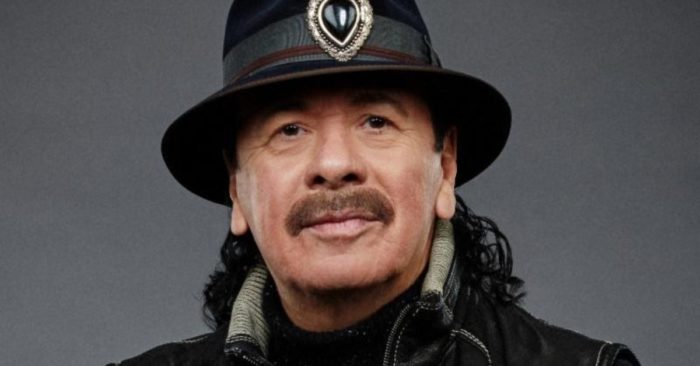 A debut single off the album is due to release later this month. BMG is the fourth-largest music company in the world. “I am honored to partner with BMG to release Blessings and Miracles. I would like to thank everyone at BMG for sharing our collective commonality-vision to touch people’s hearts with energy, conviction and integrity. Now more than ever, we need songs and melodies to remind us that we are significant, meaningful and that life is full of blessings and miracles,” said Santana in a press release.

Over his 5-decade career, Santana has won 10 Grammy Awards and three Latin Grammys. He won a record-tying nine Grammys for his ’99 project Supernatural including Album of the Year and Record of the Year for “Smooth.”

He has received the Billboard Century Award in ’96 and was welcomed into the Rock and Roll Hall of Fame in ’98. Santana holds a residency at the House of Blues Las Vegas this summer and fall.

We still love him for his Love Devotion Surrender album -with John McLaughlin in 1973- one of a kind for sure!

BATWOMAN RISES — Think back if you will to the first season of the CW11’s Batwoman – which starred Ruby Rose. I don’t remember if it was before the season finale or right after, but Rose announced she was stepping away from the show. Suddenly, a modest hit of a show was in serious trouble. Quickly, show-runner and creator Caroline Dries, announced the Javicia Leslie would be cast as the new Batwoman.

I said at the time, they should just throw the towel in, as I feared they would not be able to introduce a new actor as Batwoman. Javiaca Leslie, late of the much-ballyhooed show God Friended Me, was good, very good in fact. So much so, that when a character tuned out to possibly be Kate Kane – the last few episodes of season 2-, you immediately wondered what was going to happen to Leslie.

Well, it turned out the new Kate (Wallis Day) after suffering a memory loss, left Gotham, leaving the way for the new Batwoman, Leslie, to continue.

I was a big fan of the show Gotham -and, actually all things Bat- and got into this show right away. Dries created a great playbook for the show and even ended the second season with hints about a Penguin, Poison Ivy and Clayface. For Bat fans, that was like manna from heaven.

SHORT TAKES — Romeo Delight, with Buddy Blanchard- sold out their weekend show at Mauch Chunk Opera House in Pennsylvania. Buddy said it was their quickest selling show ever. No question, Romeo Delight is a hit … Prince’s much awaited lost album Welcome 2 America failed to catch fire last week when it was released. It sold about 60k copies. We had the video for the single, which we loved. Sad for sure … Check out a terrific Micky Dolenz interview Music Night At The Majestic  (with host Michael Boswell) here: https://www.facebook.com/MusicNightAtTheMajestic/videos/222487193107923 …
Dolenz revealed some thing we never knew: like singer/songwriter Paul Williams auditioning for The Monkees; and, the fab-foursome taking the Monkee-mobile out for a spin during a lunchtime break whilst filming the show. Crazy … Sad news from Eppy at My Father’s Place HQ in Roslyn, New York. Seems the legendary club that re-opened two years back has had a  serious conflict with the owners at their new location, The Roslyn Hotel. All I can add is that by not letting Eppy do his thing – which in the 70’s had him introduce such acts as Hall & Oates, Bruce Springsteen, Joan Jett, Aerosmith, The Ramones, and Todd Rundgren and so many more – they’ve crippled his creativity.

For my money, Michael ‘Eppy’ Epstein  is one of the best there is at attracting and discovering quality talent. He’s booking some other shows, in Amityville and Island Park,  but it’not the same as having your own club. Check out this article from last week’s Island Now: Conflict, not COVID, keeping My Father’s Place out – The Island Now … Have you heard the cover of AC/DC’s “Highway To Hell” from Tom Morello, with Bruce Springsteen and Eddie Vedder joining in? Do you like it? Check it out here:

And, believe it or not, Guns ‘n Roses have released a new single, “Absurd.” Nothing great in my book, but it’s great to have Axl and company back …

So sad that drummer Charlie Watts will miss most of The Rolling Stones upcoming No Filter tour. He’s 80 and doesn’t have to apologize for anything. Drummer Steve Jordan will be his replacement. I think I read where this will be the first-ever Stones gig that Charlie has missed. He’s one of the best and get back soon … Speaking of live shows: singer Michael Buble was the first, to my ears, to postpone shows until October at least because of the rising Delta-variant fears. With so many bands going out in the next month or so, a cancellation would be terrible. September 10 is the first date for The Monkees with Micky Dolenz and Michael Nesmith. Let’s hope for the best … And, it looks like Jeopardy producer Mike Richards will be the new permanent host … what do you think? … George Harrison’s 1970 masterpiece All Things Must Pass was re-released this week with a special 50th anniversary (really 51st) treatment. With dozens of outtakes included, as well as the never-before-heard “Cosmic Empire,” its a massive undertaking. And, you thought the original was a tad bloated – this one even comes with a piece of grass from Harrison’s beloved Friar Park home! It was a classic, ground-breaking album for sure … Classic of the week: The Church’s 1988 masterpiece “Under The Milky Way” – https://www.youtube.com/watch?v=pWxJEIz7sSA

G. H. HARDINGJanuary 16, 2023
Read More
Scroll for more
Tap
Join Award-Winning Actor/Playwright Jim Brochu for Watching from the Wings and More Tales of the Theatre Today at 7pm
Ann Crumb: From my Memoir, 200 Times a Year. My Life in, At and Around the Theatre