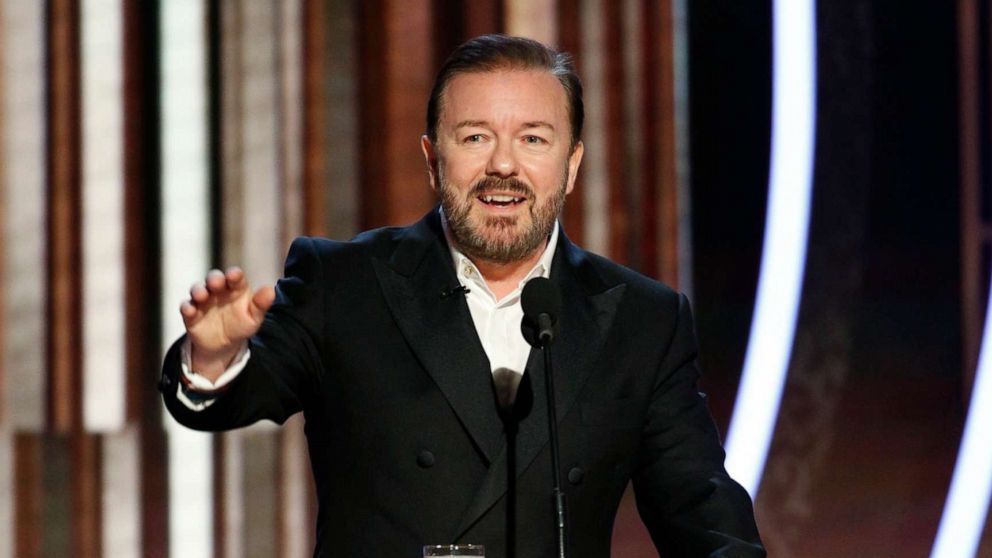 ROASTED GLOBES — I love Ricky Gervais … or, at least I did until his opening monologue at Sunday’s Golden Globes.Simply put, I thought it was unduly harsh – although, his quip about Leonardo DiCaprio’s girlfriend growing older whileThe Irishman was unspooling, was pretty funny.

Maybe it’s getting older, but for him to come out and lambast the Hollywood community sitting right before him, I felt was just in bad taste. Funnily enough, after that monologue, you hardly saw him.

When Ricky introduced the Hollywood Foreign Press bigwig, I actually thought he had one of the funniest lines of the night: “Ricky keeps saying this is his last show … I wish he’d put it in writing.”

Quentin Tarantino, as predicated, had just a terrific night. He is, without a doubt, the maverick director of the moment. His 9th film,  Once Upon A Time In Hollywood was simply magnificent. Sam Mendes’ 1917 won Best Picture … but, it’s not even officially out. Phoebe Waller-Bridge, of Fleabag, won two awards and she is just outstanding. If you haven’t seen it, or heard about it, you can’t appreciate it. Maybe the most original thing on TV these days. Fleabag’s Andrew Scott, nominated, did not win. He definitely should have.

Brad Pitt’s award was well deserved. He was just sensational. Kudos! Two awards for HBO’s Succession were well deserved as well; one for the show and one for its star Brian Cox; celebrating his 60th year in show business. Cox is just astounding; we saw him over the summer at Lincoln Center in The Great Society … just superb!

Eons ago, I was on the set for Tom Hank’s Money Pit – a fun, but not really great movie. Hanks didn’t know us from Adam, but could not have been nicer. His speech Sunday night was magnificent. He really is a good guy.

He’s playing Colonel Tom Parker in his next movie, working with Baz Lurmann, and early reports say that Hanks is playing a bad Tom Parker. Great speech and well deserved for sure.

Not a great night for Netflix (nominated for 34; won 2) or The Irishman either. Chaotic show for sure. Rumors came fast and furious late-Monday that the show’s producers were circling back to Tiny Fey and Amy Poehler as hosts for next year!

DYLAN — (via Deadline) Searchlight Pictures has closed a deal with Ford v Ferrari helmer James Mangold to direct Timothée Chalamet as the young Bob Dylan, during the period when he was poised to become folk music’s most seminal figure. When Dylan instead embraced rock ‘n’ roll and traded his acoustic guitar for an amp and an electric guitar, it created a huge outcry. And it cemented the status of rock music. Dylan is working actively with Searchlight and Mangold on the film, which the studio said is untitled but has been referred to around town as Going Electric.

Negotiations are underway with Chalamet, who has gotten strong reviews for Little Women, and who next will make his London stage debut opposite Eileen Atkins in 4,000 Miles, the Old Vic production of Amy Herzog’s Pulitzer-nominated drama. The play bows April 16 and closes May 23. It is expected he will do Going Electric after that.

Chalamet has the Wes Anderson-directed The French Dispatch coming from Fox Searchlight this year, though no release date has yet been firmed. He closes the year starring in the Denis Villenueve-directed adaptation of the seminal sci-fi Frank Herbert novel Dune, which Warner Bros and Legendary release December 18.

KYLIE MINOGUE — Kylie Minogue and her family are donating $500,000 to help those fighting the bushfires in their native Australia.

Kylie, her sister Dannii and other members of the Minogue family have banded together to give to relief efforts, which are aimed at dousing the blazes that have killed at least 24 and destroyed more than 1,500 homes across New South Wales and Victoria.

Sharing a picture of herself walking in the countryside, Kylie wrote on Instagram: “Last year, I had the incredible opportunity of visiting some of the many beautiful places in my homeland for the first time. Returning home to such devastation throughout much of the country is heartbreaking.

“As a family, we’ve donated $500,000 towards the immediate firefighting efforts and the ongoing support which will be required. Big or small, from near or far, any support will help those affected by the devastating bushfires. With love, The Minogue Family.”

SHORT TAKES — Congrats to Dominick Sassone who’ll take over the GM reigns at The Palm in Philadelphia. For how long, I don’t know. Insiders says the Palm-chain is for sale and talks about a possible purchase are ongoing. Sad. Very sad … Excellent story on the late-Allee Willis from NBC’s Harry Smith on Sunday. Gone too soon, but certainly not forgotten. Kudos … Micky Dolenz at this week’s Sketchfest in San Francisco … We popped into Rosa Mexicano this weekend and just loved it. Hadn’t been there in years. Their pomegranate Margarita is still a standout … Burt Ward (Batman) gets a Hollywood Walk of Fame Star Thursday. Overdue? … NYC’s Archive of Contemporary Music, now located in Tribeca, has to move. As of this writing they’ve received several offers. Preserving that original music and original artwork is a must. Check them out here: https://arcmusic.org/ …

Had a great chat with Good Times’ CEO Richard Branciforte. Good Times is celebrating their 50th year of publication and that’s an amazing milestone for any publication today. Writers and PR people, who have passed through their hallowed doors, include: Kurt Loder; David Fricke; Mark Bego; David Salidor; and Pete Crescenti. Congratulations … Good times for sure … and,

Robert Miller’s Project Grand Slam at APAP show this Saturday at NY’s Hilton and later that same night at The Groove in Greenwich Village.