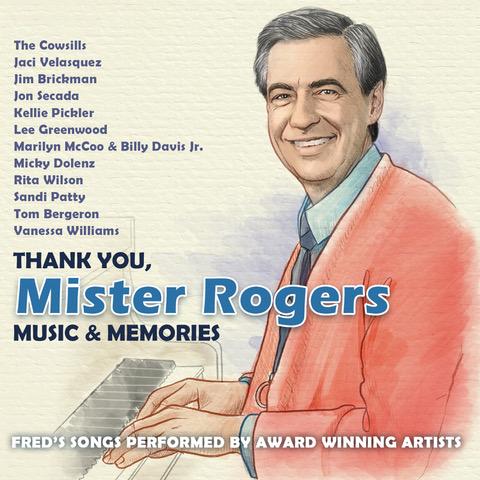 MISTER ROGERS B DAY — Dennis Scott, producer of the terrific tribute CD Thank You, Mister Rogers, is holding an an event on March 19th and will take place in the Nashville ASCAP lobby commemorating the CD and Fred Roger’s birthday; on March 20. There’ll also be a surprise visit – from one of the original cast members of Mister Rogers’ Neighborhood. There’ll also be a petition to nominate Fred Rogers to the Songwriters Hall of Fame.

Also, The Cowsills (still kicking and still terrific) who appear on the CD singing “Won’t You Be My Neighbor,” will appear on the March 10 Mike Huckabee Show, with producer Scott as well in the mix.

Artists also appearing on the CD include, Rita Wilson (“Sometimes People Are Good”); Micky Dolenz (“Perfectly Beautiful Day’); Vanessa Williams (“Many Ways To Say I Love You”); Jim Brickman (“This Is My Home”) and Kellie Picker performing “It’s Such A Good Feeling.”

A BEATLES WIN — The Beatles have won a lawsuit involving counterfeit merchandise.

Apple Corps has been awarded $1 million from each of 77 defendants that sold unauthorized Beatles T-shirts, sweaters and other apparel. None of the accused parties appeared in court, leading federal judge Beth Bloom to issue default judgments.

It’s doubtful that The Beatles’ business arm will ever collect a penny, but the case sets a legal precedent that may prompt other counterfeiters to think twice about selling trademarked merchandise without permission.

WHITNEY NO NO — (from Showbiz 411) Whitney Houston has no immediate relatives. Her Estate has no reason to make money, actually. Her only real heir was her daughter, Bobbi Kristina, and she’s dead. As we all know.

But lack of immediate relatives hasn’t stopped her remaining family– two brothers, and a sister in law was her manager and now executor — from crassly cashing in on this tragic woman.

“An Evening With Whitney Houston” was announced a tour Wednesday featuring a hologram of the late singer. Macabre? Maudlin? Yes. Bottom feeding? Absolutely. I defy Whitney’s “Estate” to explain any reason beyond avarice to set this plan in motion. Whitney has no children to feed. It is hoped that her brothers are taking care of her mother, Cissy Houston. (Their father is even dead, relieving them of that responsibility.)

Whitney would never approve of this. There’s no spin they give this stupid idea to make it seem palatable. Whitney knew her family was only interested in living off of her. But the Estate– brothers Gary and Michael— have clearly been identified in two documentaries and many articles as the ones who introduced Whitney to drugs. And now that she’s dead, they will profit off of her?

I remember my visit to Whitney’s New Jersey mansion back in 1989. The whole family was there. They had no independent life. Four years into Whitney’s career, they were all in. No one had an outside life, or a job. It was all based around Whitney.

When the tour– which starts in Europe on February 25th– comes to the US this fall, please do not give them money. Boycott this, and all hologram tours. They are so deeply disrespectful to the artists.

Man, what a story. Roger Friedman though, is right on the money. Boycott for sure. Just awful.

MILLER TIME AT MY FATHER’S PLACE — Robert Miller and his Project Grand Slam aggregation delivered a home run Friday night at My Father’s Place in Roslyn. The legendary club, which now resides in The Roslyn Hotel, is a supper club, with a beautiful, intimate ambiance, with perfect sound and great sight lines.

Miller and company, who is coming off his PGS 7 album, just soared with their signature hits (like “Gorilla”) and new tracks off his next album. “Constable On Patrol” being the highlight; while ‘Stockton Fanfare” was another highlight.

The interplay from the musicians was just sensation; especially guitarist Tristan Rogers.

Miller’s two-keyboardists also were terrific and lead-vocalist Marilyn Castillo, delivered the goods. As a jazz/fusion enthusiast from way back (Weather Report; Return To Forever; The Brecker Brothers) this show was like manna from heaven.

Michael ‘Eppy’ Epstein, the heart and soul of the club, is ready to book them back. Perfect night in Roslyn. Thanks to their PR-man David Salidor for the invite.

SHORT TAKES — Sure would love to read a copy of Gene Cornish’s Good Lovin’ – My Life As A Rascal tome. Just read a terrific interview with Gene (in the new Goldmine) by none-other than former-Aquarianmaestro Mike Greenblatt; definitely one of the best scribes out there. Here it is: https://www.goldminemag.com/interviews/gene-cornish-the-life-of-a-rascal …

Social-influencer Wendy Stuart Kaplan guested on the Deeper Than Music podcast; hosted by Markos Nious. Check it out here: https://www.iheart.com/podcast/966-furyuss-deeper-than-29566199/episode/deeper-than-music-interviews-actress-model-57817674 … What ever happened to Joanna Bonaro’s Good ‘n Screwed. We were told by their PR-man that it went on hold … and, never resumed and the PR-man discmissed. Cindy Adams was a big fan too! The sizzle reel we were shown, was nothing short of terrific. Robert Funaro (The Sopranos; The Irishman) was superb and he was playing against type; a romantic role this time out. Apparently, Bonaro’s husband funded the enterprise. Trouble in paradise I guess. Real shame as it was a winner … New music bios coming in book form from both Peter Frampton (Show Me The Way) and Dave Matthews (If We Were Giants). I want to read them both … Talking to Michael ‘Eppy’ Epstein Friday night, he said musician-extraordinaire Randy Becker, is due to return to the club to perform … Happy BDAY Chloe Fay, Derek Storm, Gary Gershoff and Joel Diamond!!!