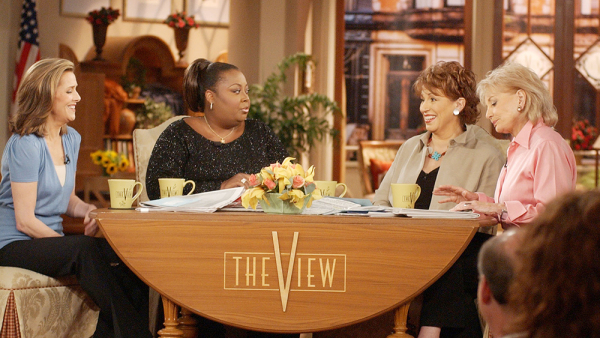 VIEW THIS — From Variety: Barbara Walters is making a return to TV. But this time, an actress will be playing her.

Ladies Who Punch: The Explosive Inside Story of The View, the New York Times best-selling book about the behind-the-scenes drama at the ABC daytime talk show, has sold its screen rights.

The project will be adapted into a TV miniseries. Ladies Who Punch, which came out in 2019 from St. Martin’s Press, became a sensation on social media, with repeated mentions by Andy Cohen, Howard Stern and Wendy Williams, among others.

Ladies Who Punch is written by Variety’s New York Bureau Chief Ramin Setoodeh based on more than 150 interviews. The non-fiction book chronicles the backstage workings at The View, the program created by Barbara Walters in 1997 as a platform for women to discuss politics and pop culture.

But one of the unintended consequences of the show, which was meant to be a bastion for feminism, was that it created a decades-long power struggle for control between Walters and her famous surrogate daughters – including Rosie O’Donnell, Whoopi Goldberg, Joy Behar, Elisabeth Hasselbeck and Star Jones.

In 2006, prior to an interview with Hillary Clinton, O’Donnell roasted Donald Trump for his sexist treatment of women and his finances. That led to a bitter feud between her and the real estate mogul, which continued through Trump’s 2016 presidential run. It also sparked tensions backstage between Walters and O’Donnell.

“It started as a bet nobody thought would ever work, but when icon Barbara Walters created The View 23 years ago, she also began a conversation that has not ceased in breaking ground, pulling in audiences and guests around the world and remaining a cultural juggernaut,” said Ryan Lindenberg, PictureStart’s executive VP of production. “Ramin’s amazing book is the perfect fodder for an addictive, juicy, wickedly smart and provocative series that will have viewers on the edge of their seats, wanting more.”

The TV series will cast A-list actresses to play Walters and her co-hosts. One of themes of Ladies Who Punch is what it means to “have a voice” at the table as a woman in the entertainment industry. Walters retired from the program in 2014, but even now, in its 23rd season, “The View” is having a ratings surge on ABC.

Interesting news for sure. First: Barbara Walters is still a force in TV. I remember when she started this show; it was really created, she said over and over, as an alternative to shows like Regis & Kathie Lee, with a male and female host. It’s developed into a major power force and epic behind-the-scenes terrordome.

I well remember that David Letterman would often play a tape of them all talking at once and ask, is this show still on? It always got huge laughs.

Barbara Walters father Lou, ran the Latin Quarter and as such, she’s always had a foot (or, two) in showbiz royalty. Reportedly not in good health and rarely seen in public, her take on this might never been heard.

To me, I’m surprised that the show is still on, but the market for at-home-housewives who watch this is immense. Longtime producer Donald Berman is a stabilizing force there. He’s a good guy amongst the thieves.

Again, Apple TV’s The Morning Show showed it … The View is for real.

CROWE’S SON — Russell Crowe will headline American Son, a mob thriller that was previously set up at Sony, but is now at Paramount.

Based on Jacques Audiard’s French movie A Prophet, American Son will be directed by Andrew “Rapman” Onwubolu with Dennis Lehane writing the screenplay.

Pic follows a man who builds a multiracial crime syndicate after falling under the control of a mobster, played by Crowe. He takes down his mentor, and earns a spot alongside the Italian and Russian mafias.

The original movie, won the Grand Jury Prize at the 2009 Cannes Film Festival, and was nominated for a 2010 foreign language film Oscar. In that pic, the protagonist is sent to a French prison where he becomes a kingpin.

Some interesting choices of late by Crowe. Next up for him is Unhinged, which stars Crowe as a man battling a bad case of road rage. The real interesting aspect of this movie is that it’s from Solstice Pictures, run by Mark Gill; former wizard-at the Harvey Weinstein run Miramax Films. Has Gill learned the art of promoting from his boss? You betcha!

The pic is clicked to be the summer movie. We’ll see-when I watched the trailer I immediately thought of Mel Gibson … but, actually, Crowe is great here. American-accent and all.

Take a look at this trailer:

HEROES & ICONS — With more downtime these days than ever before, I turned on the TV and after going through 150 channels, found the H&I channel at 151. H&I, which is the Heroes & Icons stations features all the best detective and sci-fi features from yesteryear. Shows like Numbers; Rat Patrol; Monk; JAG, House; the original Shatner–led Star Trek and the original McGyver are all there. Cheesy? Definitely, but I always loved Nash Bridges starring Don Johnson and Cheech Marin, which is also on their playlist.

Johnson, fresh from his Miami Vice stint, controlled basically the whole show and while the scripts and plots weren’t anything too hard to digest, his wise-cracking with Marin was quite funny. The show also introduced Carlton Cuse and Shawn Ryan, who would go onto create two of the most innovative shows ever: Lost and The Shield. Impressive, right?

One episode even had Johnson’s old Vice-co-star Philip Michael Thomas, who was great, and Marin’s comedic-partner Tommy Chong. One scene had Chong walk into a cannabis-emporium asking where’s Dave. If you’re a fan … you get the reference.

With Johnson being a bona fide marquee name again, USA Network and Johnson and moving forward with a Nash Bridges-re-boot, with Johnson and Marin attached. Here’s the press release:

Don Johnson, set to reprise the title role in USA Network’s upcoming Nash Bridges re-boot, confirmed today that longtime co-star Cheech Marin will be back for another go-round.

Appearing on CBS’ The Talk , Johnson was asked by host Sharon Osbourne whether Marin would be returning (as the character Inspector Joe Dominguez).

“Oh yeah,” said Johnson, “The Cheech will be back. I think in this adaptation of Nash Bridges, he’s going to actually be selling weed. And the cops in San Francisco are actually going to be smoking it.” Johnson was joking, probably.

The Nash Bridges project is in development at USA Network, and is being developed as a two-hour movie/backdoor pilot. “We’re writing it now,” Johnson said on The Talk, “and it’s a two-hour television film, and they’re looking at it as kind of a way to launch it again as a series. Good Lord, I don’t know how I feel about that.” The original Nash Bridges series ran on CBS from 1996 to 2001.

Celebrity-scribe Mark Bego sent us a photo of his just re-organized record collection (just part of it, trust me!) but, there’s a very distinct clue there as to what his next subject will be? Care to guess? We don’t know, but can certainly render a guess or two …The Hollywood Bowl has cancelled its summer season (the first time in 98 years) with the LA Philharmonic, and all other performances. This, despite the Bowl being outside, they don’t want the crowds to infect each other. So, summer in L.A. is over. With Broadway now closed till September (and, maybe forever) the summer has changed forever. Humbling for sure … Happy Bday Eddie Muentes … And, Donie Kehr’s “New York City Strong” video is out, Check it out here: https://www.youtube.com/watch?v=7GoTt40tYs8 .