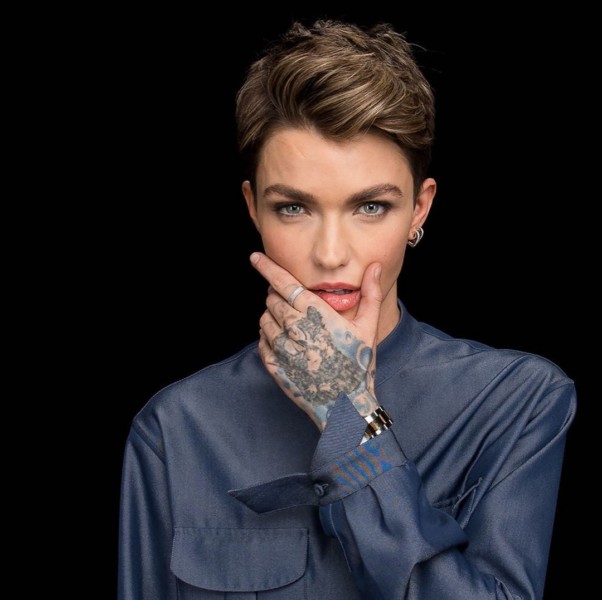 THE ROSE IS OVER — It’s a shocker! Per Deadline: In a major surprise, Ruby Rose has departed the lead role on The CW’s Batwoman after a single season. Producer Warner Bros. TV says the role will be recast.

The announcement Tuesday — two days after the show’s season finale — leaves the series without a lead actress for the time being. A timeline for a new actress to take over the historic role has yet to be determined. Batwoman was renewed for a second season in January, along with 12 other scripted series on The CW, and was set to anchor the network’s Sunday night starting in early 2021.

Batwoman made TV history as the first scripted live-action TV series to feature a lesbian superhero at the top of the call sheet. It was important to the production and openly gay producers Greg Berlanti and showrunner Caroline Dries that the part went to a member of the LGBTQ community.

Both Rose and producers Warner Bros. TV and Berlanti Productions praised one another in statements announcing her departure.

“I have made the very difficult decision to not return to Batwoman next season,” said Rose. “This was not a decision I made lightly as I have the utmost respect for the cast, crew and everyone involved with the show in both Vancouver and in Los Angeles. I am beyond appreciative to Greg Berlanti, Sarah Schechter and Caroline Dries for not only giving me this incredible opportunity, but for welcoming me into the DC universe they have so beautifully created. Thank you Peter Roth and Mark Pedowitz, and the teams at Warner Bros. and The CW who put so much into the show and always believed in me. Thank you to everyone who made season one a success — I am truly grateful.”

The CW, Warner Bros. TV and Berlanti Productions said jointly, “Warner Bros. Television, The CW and Berlanti Productions thank Ruby for her contributions to the success of our first season and wish her all the best. The studio and network are firmly committed to Batwoman’s second season and long-term future, and we — along with the show’s talented creative team — look forward to sharing its new direction, including the casting of a new lead actress and member of the LGBTQ community, in the coming months.”

Rose faced immediate backlash on social media after she was cast and would eventually quit Twitter, although she remains active on Instagram.

Like dozens of other series, Batwoman was forced to end its season early due to the coronavirus pandemic. The drama finished 20 of a planned 22 episodes, with Sunday’s installment serving as the season finale. Sources tell The Hollywood Reporter that episode was Rose’s last with the show, but it’s unclear if a transition to a new lead would have been set up in the two episodes that weren’t completed.

Rose starred on the series as Kate Kane, a cousin of Bruce Wayne’s who takes on the mantle of Batwoman. The character debuted in December 2018 during The CW’s annual crossover event for its DC Comics shows before getting her own series. Vampire Diaries veteran Dries created the show and executive produces with Berlanti, his producing partner Schechter and Geoff Johns.

Camrus Johnson, who plays Luke Fox on the series, wrote on Twitter late Tuesday night that “We will work our freakin’ butts off to give you an amazing season 2 that continues to represent the LGBTQA+ communities and people of color.”

It’s not the first-time actors have been switched; either by their choice or the producers. Who can forget the disastrous change in Darrin’s in Bewitched many moons ago; or Donna Reed stepping in for Barbara Bel Geddes in TV’s Dallas as matriarch Miss Ellie; and, the three different Catwomen on the Adam West & Burt Ward helmed Batman TV series; and, the more current change in the re-booted Dynasty on the CW of Alexis.

I’m quite sure there’s much, much more to this (stories have already surfaced that Rose and the cast and crew never got along and that she hated relocating to Vancouver) but, for the moment let’s reserve judgement.

I will say, that as a regular viewer, her enthusiasm in the role seemed to diminish with each episode. Rose is captivating for sure and more than held her own in the beginning.

Sad to say, this will be a herculean effort to come back from. It’s one ting to establish a new character; another to get a new show renewed; and, then, lose your lead actor. Fingers crossed.

JEEPSTER — U2 and Elton John have come together to cover “Bang a Gong (Get It On)” for AngelHeaded Hipster: The Songs of Marc Bolan and T. Rex, a tribute album arriving on Sept. 4.

The project was curated by Hal Willner, the celebrated producer who died earlier this month from COVID-19.

“Hal had a unique vision of Marc Bolan’s music, and working on AngelHeaded Hipster brought him great joy,” supervising producer Rachel Fox said in a press release. “Speaking for those closest to him, we will forever be heartbroken at the untimely loss of our beloved friend and irreplaceable creative engine. Hal, who referred to AngelHeaded Hipster as his White Album, was eager for everyone to hear these beautiful songs and to start thinking about Bolan and T. Rex again. This album is a testament to Hal’s spirit.”

The record’s title comes from a line found in Allen Ginsburg’s “Howl,” where the poet praised the birth of rock n’ roll as “angelheaded hipsters burning for the ancient heavenly connection to the starry dynamo in the machinery of night.”

T. Rex are among this year’s inductees into the Rock & Roll Hall of Fame, gathering enough votes in their first year on the ballot. The induction ceremony was supposed to take place this coming weekend in Cleveland, but the coronavirus pandemic has pushed it back to Nov. 7.

TURN ON; TUNE IN; DROP OUT — (Via Deadline) As documentary films and series continue to escalate in prominence in this age of binge watching, here’s a package that is creating some excitement as it is shopped this week and next. Imagine Documentaries and Appian Way Productions have partnered to produce Timothy Leary: Follow Me to Freedom, a docuseries that draws upon Leary’s vast archives and is fueled by exclusive access to his longtime personal archivist, Michael Horowitz. Malcolm Venville (Grant, And We Go Green) is set to direct what the filmmakers believe will be the definitive account of Timothy Leary’s odyssey, with never-before-seen access to Leary’s personal archive.

This is thanks to resources provided by Horowitz, a rare books and manuscripts specialist who was building a library in San Francisco on the history of mind-altering drugs when he learned that psychedelic scientist/LSD advocate Leary had been imprisoned in Governor Ronald Reagan’s crackdown. Horowitz became custodian of Leary’s archives and his confidant during the stormy years of Leary’s fugitive life, an existence which included imprisonment on four continents. The FBI eventually seized the archives and dragged Horowitz before a Grand Jury investigating Leary’s prison escape.

The docuseries will delve into Leary’s growth from psychologist and writer to ’60s counterculture symbol and LSD advocate and enemy of the right-wing establishment who was dubbed ‘the most dangerous man in America’ by President Nixon. The docuseries will explore his time as a fugitive, the complicated history of LSD, the state of the current psychedelic renaissance, and the inner mind of one of America’s most fascinating and controversial iconoclasts.

SHORT TAKES — Knight Rider actress Rebecca Holden and Little Anthony have recorded “I Believe” – a tribute to the families and heroes battling COVID 19. Check it out

… The next new TV season is suppose to start in September; right after the traditional date of The Emmys. Could it now start in January? A report issued this week suggests that this COVID-situation could affect 60% of TV. It is indeed a whole new world … Watched the first Showpiecer on TNT. I did not read the novel not see the movie (in 2013), but starring a very austere Jennifer Connelly and Daveed Diggs. I am intrigued …

The new HBO Max will be showing the long-awaited, much-anticipated Zach Snyder cut of his Justice League-Warners (2017) movie, that opened to less than stellar reviews. Reports seeped online that Snyder’s cut was darker and better before he left the project. Fans, as well as Justice League stars Ben Affleck and Gal Gadot began calling for #ReleaseTheSnyderCut in November, and that hashtag reached a fever pitch in recent days with Aquaman star Jason Momoa yelling online, release the F***king Snyder Cut. We hear that the director is polishing up the print, hence the 2021 release date on the new Warner Bros. streaming service, which debuts next week May 27. Warners has Patty Jenkins’ Wonder Woman 1984 scheduled for theatrical release on August 14. Warners. DCmovies outside of Christopher Nolan’s Dark Knight trilogy have grossed more than $5.1 billion worldwide from BvS, Justice League, Man of Steel, Wonder Woman, Aquaman, Suicide Squad and Birds of Prey …

Donnie Kehr’s video of his “New York City Strong” is out, check it out

… Congrats to Armen and Mona!