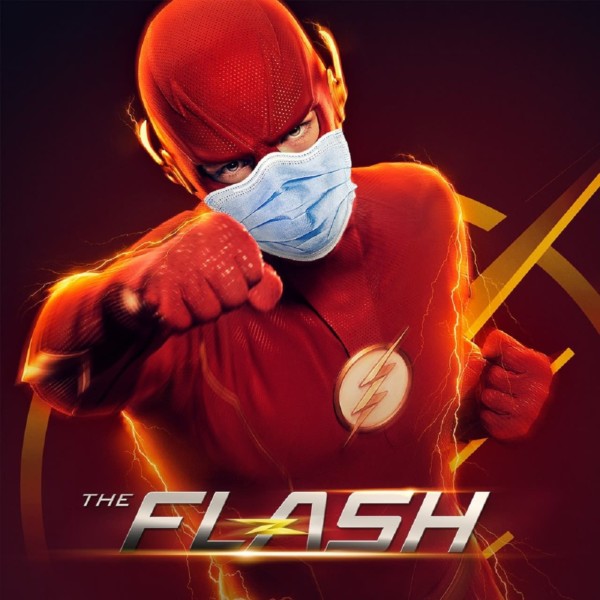 MASK IT — The CW has released seven new season posters for CW’s slate of Arrowverse shows (Supergirl, DC’s Legends of Tomorrow, The Flash, Black Lightning, Stargirl, Superman & Lois)  sporting a timely, coronavirus-themed look. All character posters feature their main star wearing a face mask in an effort to raise public awareness on the efficacy of facial coverings preventing the spread of COVID-19.

The Flash and Supergirl were forced to shut down production in March due to public mandates preventing large gatherings. The CW’s Riverdale also had to suspend production when a crew-member contracted coronavirus.

DC’s Stargirl is returning for a second season on the network. The network renewed the breakout superhero series starring Brec Bassinger based on the DC characters. The network will become the exclusive in-season home to the series next season, with episodes airing on the CW network and streaming the next day on the CW’s free, ad-supported streaming platforms.

The list of WBTV shows that are eyeing a late August start, which film in Vancouver, include The Flash and Superman & Lois.

It was previously reported some Supernatural cast members arrived in Vancouver in July, with the show on track to begin shooting its final three episodes in early to mid-August.

ELLEN UPDATE — As of this writing, Jerry O’Connell, Katy Perry, and Samantha Ronson have come to Ellen’s defense. Not exactly a stellar A-list … but, am glad some positive voices were finally heard. According to reports, The Ellen DeGeneres Show will return for an 18th season on September 9. No word if it’s the final season, but that first show in September will be heavily viewed for certain.

Here’s what Perry said: “I know I can’t speak for anyone else’s experience besides my own but I want to acknowledge that I have only ever had positive takeaways from my time with Ellen & on the @theellenshow. I think we all have witnessed the light & continual fight for equality that she has brought to the world through her platform for decades. Sending you love & a hug, friend.”

NIVA — #SaveOurStages is the hashtag, slogan and rallying cry of the National Independent Venue Association (NIVA), a burgeoning advocacy group that represents nearly 2,000 music clubs spanning all 50 states and the District of Columbia.

The coalition’s mission is an increasingly desperate one, with indie concert venues boarded up by COVID-19 finding it increasingly impossible to keep their collective head above water — faced, as they have been since March, with zero revenue topped by undiminished operating costs.

“In my situation with Sub T, it’s about $12,000 overhead a month for just the basics,” said Chicago’s Robert Gomez, a NIVA member who owns 20-year old Wicker Park music room Subterranean and its sister venue, Beat Kitchen. “Mortgage, property tax, insurance, licenses; there hasn’t been a forgiveness on licenses. All these expenses that you still have to absorb — while closed — are my reality.”

Joe Shanahan, founder of the venerable 1,000-capacity Metro in Chicago, now in its fourth decade, points out, “I keep going back to the fact that we were closed by the city and state, mandated closure; we can’t sell alcohol, we can’t sell tickets. So why am I paying for city or state business and liquor licenses?”

Shanahan’s first concert in the Wrigleyville building that houses Metro and its dance-club sibling Smartbar was R.E.M. in 1982. The quirky fledgling quartet from Athens, Georgia, would not only inspire a thousand garage-tooled bands formed in their image, but R.E.M. would go on to popularize the recently coined genre of alternative rock, selling out arenas while selling copious amounts of records through most of their unconventional, influential career.

The Today Show yesterday on NBC, running their on-going series saving small businesses, focused on The Bitter End. The club has a plan in mind if and when they get the greenlight to re-open … but, a good two-thirds of their capacity would be cut.

The Groove in the Village (NYC) had live music, but it was just a guitarist sitting in the club paying for the crowds gathered outside.

I honestly don’t know how any of these clubs can survive, whilst still paying rent, taxes, and a staff… limited thought they may be. Prayers for sure.

SHORT TAKES — Per Donnie Kehr; this year’s Rockers On Broadway will proceed on November 9. Portions will be done remotely as well as live. Stay tuned for more updates … A documentary on Vanilla Ice? With Dave Franco as Mr. Ice. Amazing. He would not have been my next choice, maybe Bowie or Rod Stewart … Laurel Canyon received 3 Emmy nods. Congrats to all … Happy 94th Bday to Mr. Tony Bennett. Fly me to the moon … Whatever happened to Wendy Stuart Kaplan and her husband, artist Alan Kaplan. News of a show consisting of Alan’s brilliant artwork was to be held in NYC. Strange? Seems to have gone the way of Good ‘n Screwed … 83% of restaurants in the tri-state area couldn’t pay their August rent. Hard times for sure …

Mike Greenly and Vic Kastel were interviewed by Ray K. this week for his TIC Radio podcast … Another great post from Forbes’ James M. Clash on Frank Zappa asking Micky Dolenz to join his Mothers Of Invention. Check it out here: https://www.forbes.com/sites/jimclash/2020/08/04/frank-zappa-asked-monkee-micky-dolenz-to-drum-for-the-mothers-of-invention/?fbclid=IwAR03tT9qqbWd_JAqmL-65Wnmjz878n2Vf43zuztKmHAn16Fyxrpr6dnLeDE#2fe3f4073c23 … Whatever became of that Kid Creole & The Coconuts 40th anniversary edition of Off The Coast Of Me; their brilliant debut album from 1980? It was to have be released as well on vinyl and CD (on 2C2C Records) … but, apparently all that never happened. Sad … Radio City Music Hall has cancelled the Christmas Spectacular for the first time since 1933. Bad omen for sure. This holiday season will be one unlike any other in history. When I spoke to Donnie Kehr, he said that they are an estimated 95,000 people involved in Broadway (owners, ushers, merch persons, dressers, PR-teams) out of work. Just extraordinary. When they return (and, that’s a big if) what will they return to? Theater owners have spoken of plastic barriers and moving seats … but, is that the Broadway-experience? I don’t think so.